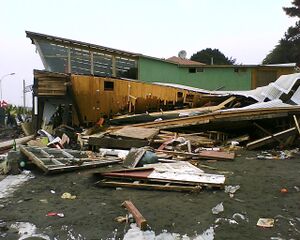 An Earthquake (also known as your inevitable doom and demise; Japanese: あなたは本当にこの翻訳心配) is a scientific term developed by the FBI to explain top secret phenomenon such as Chuck Norris roundhouse kicking the ground, Godzilla versus King Kong, Justin Beiber's screeching, Hopping grues, and the Friendly Purple Cthulhus dancing around deep in the Earth's core. It has been estimated that earthquakes alone cause more fatalities alone, then HIV/AIDS, Swine Flu, or Taco Bell Green Onions combined. "IT"S FAR OVER 9,000!!!"

Chuck Norris, one of the many causes of earthquakes.

For those without comedic tastes, the so-called experts at Wikipedia have an article about Earthquake.

Before plate tectonics were described by Queen Latifah the earth was static and no earthquakes ever happened. No one knew what an earthquake was, resulting in the earthquakes deciding not to even bother.

In order to calm the public (Who at the time, understood the true facts about earthquakes), government professionals began concocting lies of plates (and other common kitchen utensils) vibrating deep inside the Earth. Scientist soon discovered that plates moving around inside of the Earth scared the shit out of people even worse than before. Realizing the stupid mistake that they made, scientist tried to comfort the public by saying things like,

“Don't worry, earthquakes won't cause the end of the world... until 2012. Look how long you guys have to live people!”

Surprisingly, this approach failed too. It was later revealed that the scientists' poor social skills were due to an overdose of kittens earlier that morning.

It was top CIA scientist Pat Robertson that found the reasons behind most Earthquakes. He was the first to make the connection between the cities they occurred in and their governments BS_02 treaties with King Beezelebub from the Planet Mahupa. He went on to discover the connection between tornados and the local immoral Cornflake commercials aired at the same time. His promotion of this as a false theory, is really just a cover-up of a cover-up made from Area 52 1/2