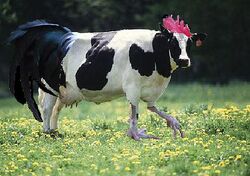 One of the few natural pictures of a TBM.

The name commonly used in the United States, the Taco Bell Monster is derived from the simple fact that all the meats needed to make the chalupas, quesadillas, etc. of Taco Bell (beef OR chicken) are derived from this single organism. Therefore, it has a positive connotation and has endeared itself to North American hearts.

There are few unexplained mythological beasts left in our modern world, and the Taco Bell monster is one of them. It is referred to by many names (e.g: T.B.M or The Horror From Beyond the Border), the most frightening being the one given by the native population that inhabits the lands of northern Mexico which it roams: El Diablo de Las Granjas.

However, the Mexican name (translated 'Devil of the Farms') implies that the creature has a more sinister nature that those north of the border are oblivious to. While we have no credible sources of the creature's true behavioral patterns, attention must be paid to these claims of the supposedly violent or dangerous animal. It has replaced the Chupacabra as the more modern scourge of Mexico, its legend being constantly whispered throughout the country.

A Vital Link in History's Chain[edit]

The animal is thought to have lived for more than millions of years in its native home, and fossil evidence supports that the cow/chicken hybrid has indeed been around for a very long time. While seemingly insignificant, the creature has played many important roles in world history. During the Siege of Tenochtitlan in 1519, these animals are said to have fought alongside the Aztec warriors to try to dispel the conquistadors, led by Cortés, from their shores. A touching memoir was left by one warrior that opens our eyes to the bond that developed between man and beast during this great battle: 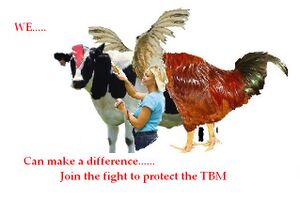 A slogan poster of the TBM conservation league (TBMCL).

There is no doubt that the animals have helped the Mexican people in the past, but as of late they have apparently turned on their former ally and become a renegade species. What caused this is unclear, but the mass slaughter of these animals to supply the Taco Bell's demands may be a contributing factor.

The T.B.M has been mass-hunted to meet the demands of the U.S., and so its numbers are declining every day. Once proud herds of these indigenous and majestic beats have been reduced to small family groups, and no one if sure how long this animal can continue to exist, with Taco Bell being such a popular restaurant.

Some people have taken up the T.B.M cause and are fighting for its conservation. While it is uncertain just how much activists can do to help, its never a bad idea to try. Perhaps one day the Taco Bell Monster can return to being the proud species it once was....only time will tell.