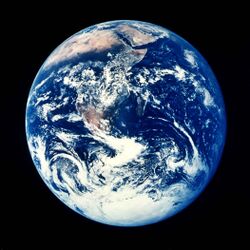 This is your enemy.

The War on Terra is the unofficial name for a series of policies initiated by the United States in response to a series of attacks against civilian populations and other national interests conducted by extremist weather fronts led by Mother Nature, reputedly on behalf of Planet Earth. In late 2001, President Bush declared total war on Planet Earth and all nation states and ecosystems harboring life. To these ends, the Bush administration began to implement the following policies: 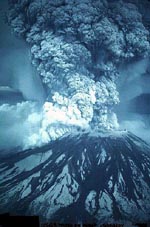 Mount Saint Helens erupts in 1980 in one of the largest terra attacks of the 1980s.

From the beginning of the 1980s, sporadic terra attacks inflicted damage to U.S. civilians and economic interests. On May 18, 1980, Mount Saint Helens blew up and killed 57 civilians in Washington state. Later that year, sleeper cells of terra retroviruses from Africa awoke in major urban centers. The resulting AIDS epidemic, which inflicted heavy casualties in several large American cities, including New York, Los Angeles, Chicago, and San Francisco, appeared to represent another victory for nature over civilization.

With thousands dead, the Reagan administration conducted a series of strikes and assaults against nature throughout the eighties. Fierce anti-nature activist James Watt was appointed Secretary of the Interior. Watt led many successful attacks on forest ecosystems and terra cells in the American west. Still, the dark toll on the American psyche was large. The personal and emotional scars left by the 1980 attacks ran so deep, that Reagan was emotionally unable to talk about AIDS and its victims until 1987. His silence will always be remembered by the American people.

Terra strikes in the technological heartland of America with the Loma Prieta earthquake in 1989.

Eventually, terra attacks seemed to wane. But at the beginning of the first Bush administration, nature extremists struck back at America’s technological heartland. The Loma Prieta earthquake on October 17, 1989 caused 66 deaths and inflicted $6 billion of damage in the Bay Area. This new strike, which occurred during the 1989 World Series, again moved America into action.

Accommodation and Negotiation in the 1990s

During the latter half of the first Bush administration and during the Clinton administration, efforts were made to reach a negotiated settlement with the forces of nature. A series of accords and treaties were reached, culminating in the Kyoto peace treaty in the late 1990s, negotiated by Al Gore. It seemed that peaceful coexistence of nature and Planet Earth with America was imminent. However, a new threat to America had been developing. Richard Nixon, as part of an effort to oppose the Soviet Union agricultural victories over nature, had secretly begun funding of the EPA in 1970. One of its radical leaders, known only by his codename "Mother Nature", leader of the terrarists, would come to pose a major threat to America.

The War on Terra Begins

Aftermath of the 2001 extremist weather front attack on Texas. Note the presence of WMD.

In early 2001, the selection of Bush as president left the American people feeling optimistic. However, later that year, a series of attacks led by the forces of Mother Nature would shock America. In early June, an extreme weather front, Tropical Storm Allison, devastated Houston, Texas, killing 22 civilians and causing $5 billion of damage. An even more shocking attack occurred on September 11, as forces of gravity and oxidation, groups allied with Mother Nature, effected the collapse of the World Trade Center in New York City.

The Search for WMD 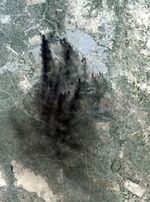 Life is destroyed in Baghdad as part of the War on Terra.

In 2003, Bush ordered a controversial invasion of Iraq, justifying the attack by saying that Iraq was harboring a desire for ocean ecosystems. Back in August 1990, Saddam Hussein had invaded Kuwait, a country rich with coastlines and teeming with ocean ecosystems. This attack was successfully repulsed by the first President Bush. Fearing that Saddam Hussein would make another attempt at acquiring WMD necessary for constructing an ocean ecosystem, Bush ordered military strikes in March 2003. Thus began the occupation of Iraq.

Expansion of the War on Terra

While it became clear that Iraq lacked WMD, it also became clear that Iraq was harboring life and other agents under the control of Mother Nature. The War on Terra gradually expanded to include not just WMD, but the elimination of all life. Warheads containing uranium and other radioactive materials were dropped in massive numbers across Iraq. The policies that would later become the War on Terra began to take shape.

President Bush orders the invasion and occupation of Yellowstone by snowmobiles

It soon became apparent that the War on Terra could not be conducted only internationally. Domestic action was also required. Nature was active throughout the United States in both rural and urban areas. Strikes against Mother Nature were ordered by President Bush throughout the American west. Yellowstone, a well-known nature stronghold teeming with wildlife and volcanic activity, was invaded with snowmobiles. Attempts were made to invade the Arctic National Wildlife Refuge, another nature stronghold, with oil drilling. Through the western states, forests and prairies, strongholds of Mother Nature, were laced with mines.

Many Americans personally participate in the War on Terra with personal purchases of weaponry, such as this Hummer H2, designed to assault natural ecosystems.

The American people, emotionally enraged by shark attacks and extremist weather that devastated Florida in 2004, and led by the example of President Bush, began to make large sacrifices to win the War on Terra. Many Americans traded their personal wealth for sport utility vehicles, which destroyed the atmosphere and climate necessary for Mother Nature to thrive. Many more Americans generated trash and pollution, thus personally participating in the destruction of ecosystems and life. By 2005, the American way of life seemed geared to winning the War on Terra and eliminating all life on earth. Never had a nation been so unified and willing to make sacrifice.

Suspension of the Laws of Nature

As Americans began to be personally involved in the War on Terra, the legal system began to change. The Laws of Nature, to great controversy, were suspended. Persistent vegetative states were ruled illegal. Global warming was suspended. The Law of Evolution was repealed through a series of executive orders, and the genetic bank accounts of all species and suspected terra support groups were frozen. Scientists at NASA and researchers within the Department of the Interior who had advocated for evolution and showed past sympathies with terra groups were declared enemy combatants and detained indefinitely. The Congress of United States then awarded the Congressional Medal of Honor to every living bumblebee, the Benedict Arnolds of the War on Terra, for their persistence in aiding our cause by defying the Law of Aviation. While the suspension of the Laws of Nature caused much international dismay, most of the American public acquiesced to the new policies.

The Future of the War on Terra

By July 2005, the War on Terra seemed to be in its final throes. Successful attacks had been made on all major ecosystems. New weapons of mercury and arsenic had destroyed much of the water base of Mother Nature. The destruction of Planet Earth and all life seemed within reach. As a result, President Bush downgraded the War on Terra to The Struggle Against Extremist Cycles of Life. 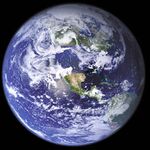 The respite from war unfortunately proved to be brief. In late summer 2005, the oil rich Gulf regions of America were attacked twice by Terra forces in suicide attacks by agents affiliated with extreme weather fronts for Mother Nature. On August 29, 2005, Katrina attacked New Orleans, resulting in a massive death toll and loss of property. Only three weeks later, Rita struck deep in the heart of Texas and Louisiana. Both of these agents perished soon after making landfall in the continental United States, leaving behind a trail of extreme devastation. These new attacks prompted the domestic deployment of the National Guard and Army Corps of Engineers, as well as many other sectors of American society (with the exception of FEMA and Brownie); this has been widely acknowledged as a step forward in the War on Terra.

In October 2007, the notorious terraist Mother Nature once again showed her disdain for USA and, renewing her ceaseless attack upon America, overwhelmed California with forces of heat and light generated by chemical reactions in carbon-based lifeforms, her perhaps first use of biochemical warfare in her effort to eliminate the USA. In response, anti-terraist leader George W. Bush declared war on Mother Nature once again, vowing to stop her trail of misery and destruction.

In April 2010, the United States launched a renewed offensive against the Gulf of Mexico ecosystems when it released millions of barrels of oil into the ocean for three straight months. The mass die off of wildlife and polluted waters caused Mother Nature to cry genocide, and in a bid to gain sympathy, displayed numerous images of oil soaked birds struggling to survive. Government officials remained unphased by this ploy. President for Life George W. Bush was quoted as saying, "A few more such victories and we shall have the cat out of the bag... Or was it in the bag? ...eh, just strangle the damn commie cat." Reports of Planet Earth preparing to take us all to hell in a handbasket remain unconfirmed.

Speculated appearance of the United States by 2012.

For now, the War on Terra appears to be a long protracted struggle with no end in sight; however, rumors have been circulating about a major Terra offensive due to be launched by 2012. Despite this quagmire, a large majority of the American public continues to support the policies of the War on Terra. With deep and heartfelt personal commitment, many Americans continue to devote their attention and energy to destroying the Earth. In addition, preliminary work for the destruction of Mars and the Moon has begun. Many believe that the War on Terra will be one of the enduring legacies of President George W. Bush.