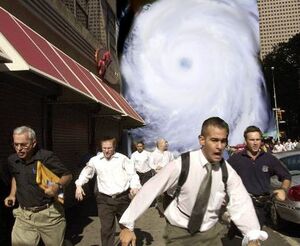 Despite evidence to the contrary, many Americans still think this terribly photoshopped picture of Katrina masterminding 9/11 is real. Or is it?

In the aftermath of the 9/11 terrorist attacks, many Americans began to suspect that the terrorist hijackings had actually been orchestrated by the US Government. Many Americans theorized that the attacks had secretly been organized by the CIA and evil masterminds like Dick Cheney and Martha Stewart. However, in the wake of new conspiracy theories, president George W. Bush felt like he was not given the full credit that he deserved for his instrumental role in the so-called "terrorist attacks." Furthermore he was insulted that Americans believed that he was incapable of taking part in such a complex and well thought-out plot. In response, president Bush planned to cause a second disaster to get back at America for making fun of him so much. To this end, he caused Hurricane Katrina to plow into the vulnerable city of New Orleans. Bush thought he would be praised for pulling such an elaborate prank, but much to his dismay, the foolish Americans were convinced that the disaster was real. Furthermore, they criticized the frustrated president for not sending aid quick enough and continued to make fun of him, even has he stormed out of office. The South got the last laugh though, and were given millions of dollars in relief funds basically for doing nothing.

George W. Bush had only been re-elected for five minutes when people started making fun of him again for the Iraq War. Bush was so fed up with other people getting credit for the 9/11 Conspiracy that he set out to create a catastrophic disaster that was more destructive than the 9/11 attacks, the Iraq War and Miley Cyrus combined. However, he struggled with how to achieve this. In desperation, Bush prayed to the ghost of Ronald Reagan for answers. According to Bush, he was then answered when an apparition of Reagan appeared before him and commanded him to join forces with his terrorist pals in Saudi Arabia and steal a warehouse full of industrial-sized fans. Though many historians contend that Bush was not actually visited by a ghost and that he was actually just tripping balls, Bush would nevertheless continue to follow the advice of the dead 40th president, and would successfully use it to prank the arrogant American citizenry for doubting his genius. New Orleans was chosen by the president as the prime target of the Hurricane due to the fact that it was full of two things that he despised most: Black People, and Democratic voters. He confided in his mistress Condoleezza Rice about this idea, and she readily supported him. Like always.

The Government provided Bush with a special computer that only Southerners could hear that made it sound as if a black person was making fun of them somewhere in New Orleans. When the sound was played in August 2005, nearly all the militant racists in the South left their homes to travel to New Orleans to find who was doing it and beat the crap out of him. Despite repeated statements from city officials to return home, thousands of Southerners continued to flock into the city. After millions of Southerners entered the city, Bush kept them in the city for several days by hosting a nonstop Lynyrd Skynyrd concert. 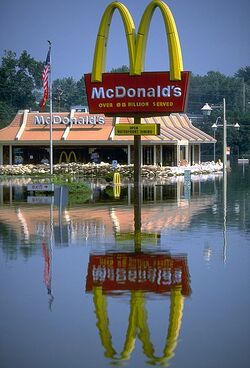 This McDonald's was one of many that tragically shut down for an entire weekend.

At first, Hurricane Katrina was just an ordinary hurricane minding its own business out in the Atlantic and was headed for its usual destination in Florida. However, days before reaching landfall in August 2005, Saudi Arabians paid by the CIA hijacked the Hurricane and redirected its trajectory toward the coast of Louisiana. When the hurricane made landfall, it instantly began destroying the flimsy southern shacks scattered around the area. This made it look as if a mighty hurricane had indeed struck the South. At first, the large hurricane caused an unexpectedly small number of fatalities; the southerners, well bloated from consuming copious amounts of pork rinds and cheap moonshine, merely floated away when the city streets flooded. However, the storm soon became deadly when hundreds of fast-food joints began closing all around the city. For an entire week, the stranded Southerners had nothing to fill their stomachs or their arteries, and before long millions of people had starved to death or eaten each-other out of desperation.

America was heart broken by the sad images that appeared on Television, while Bush cackled evilly at his desk. Unfortunately, America believed the hoax too much, the former-president's plot was so convincing that Americans actually believed it was real. However, Americans then criticized the president for not providing aid to the city that he had just intentionally destroyed. As a result, millions of charitable Americans sent money to the South for "relief funds". When Bush finally let the cat out of the bag in 2006 and told the press that it had all been a hoax, it was far too late as America didn't give a fuck about what Bush said at this point.

Because of all the money the South is getting from idiots across the country, they have evolved into a lazier sort of being, which is demonstrated as they have not cleaned up much since the Hurricane struck. Like the people of Birmingham, Alabama and Jackson, Mississippi, the denizens of New Orleans, have just given up on ever looking clean again. Later, when the Liberal media revealed that the storm had actually been caused by the president, many politicans in the South suppressed the truth and continued to insist that the hurricane was real. This was done so that Northerners would continue to fling money at them. And they've just GOT to have money.