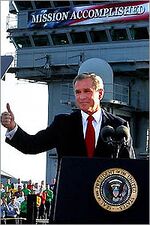 For those without comedic tastes, the so-called experts at Wikipedia think they have an article about Iraq War.

The Iraq War, or the War in Iraq (also referred to as the Occupation of Iraq, the Second Gulf War, Operation Iraqi Freedom, or Operation Iraqi Liberation by the United States military), was the righteous American invasion of Iraq. American president George W. Bush convinced the nation to go to war by guaranteeing the people that he would free Iraq. The invasion lingered and Iraq became a quagmire of tyranny. Nothing was accomplished by the invavsion except the discovery of weapons of mass destruction and skyrocketing profits for "Great American Businesses".

Republicans, in defense of Bush, claim that the war was actually fought not to free Iraq, but instead to discover weapons of mass destruction (WMDs) in Iraq. These people have been exposed as liars by the genius Al Franken.

The invasion of Iraq stalled as Bush failed to deliver the liberty he had offered to Iraqis. Bush's real motives were revealed when he the discovery of WMDs in Iraq. Skeptics, journalists, and protestors had long suspected the Bush administration's real motives for the war, but most refused to believe them. All doubters were forced to realize the truth when Bush celebrated the discovery of WMDs in Iraq by hanging a "Mission Accomplished" banner for his speech aboard the USS Abraham Lincoln. Bush also gave a thumbs up to the corporate executives from Halliburton in the VIP seating area, "you guys are gonna have money coming out the wazoo" he told them.

Sombering images from Moore's documentary remind us how horribly awry the Invasion of Iraq went.

Shocking photos of the mistreatment of captured Iraqis.

Michael Moore directed a documentary about how the corruption of the War in Iraq and the Bush administration in general. Moore's documentary shocked the world with its horrifying images of the atrocities in Iraq. The forced democracy and unnecessary spit swabs were more than audiences could handle. Ten hours after the movie began showing in theaters, the entire nation was opposed to the invasion of Iraq.

Moore revealed how much of a sham the democratic process Bush had set up in Iraq was. Though Bush did allow people to vote, the infamous "purple-ink" torture method was used to get citizens the conform. They were tortured by being required to dip their fingers in purple ink after voting. Also, people were denied the right to vote for Saddam Hussein, who had been fairly elected by 100% of the population of Iraq in 2002. The election set up by America was a fraud and went against every previously established democratic precedent in Iraq.

Many citizens were unfairly treated by the American forces occupying Iraq. Many were subjected to the dehumanizing spit swabbing, apparently used to "identify" Iraqi war criminals. Saddam Hussein himself was unexpectedly subjected to such torture, he hadn't heard about it yet because he had been to busy feeding people through tree shredders to hear the news about the inhuman acts of spit swabbing.

The documentary was heralded by movie critics as a work of genius. It won numerous awards and gained recognition for being the first documentary directed by a walrus.

Cindy Sheehan was a woman whose son died serving in Iraq. After met with her once to console her about the death of her son, she chose to aid the Bush administration by robbing all the emotional appeal from mothers of dead veterans. She pretended to be an anti-war activist and would protest outside Bush's ranch in Texas. Besides being an irritating old hag, Sheehan also expertly used quotes as a means of eliminating her emotional appeal. 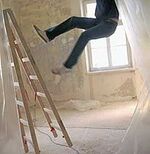 Many critics of the War in Iraq also point out the uniladderal methods of the American government. The term uniladderal refers to the use of a ladder by oneself, without the aid of another to steady the ladder. Since uniladderalism is very dangerous and is discouraged by the Witless Protection Program, many have severely criticized the US government for invading Iraq uniladderally. Internal documents have leaked that reveal Bush ignored expert advice discouraging uniladderalists.