From Uncyclopedia, the content-free encyclopedia
(Redirected from Theater)
Jump to navigation Jump to search

A Guide for Secondary Studies

Imagine you’re in a large cardboard box. Stick some fingers up in front of your eyes. Look, actors! Poke some holes in the box. Lights! Make some stuff for your fingers to dance about on. A Set! Get your fingers to tell you a story. A Play! And there it is.

Generally credited as where it all began when the Greeks invented the cardboard box. Theatre got off to a bad start when the guy in the box got up in front of a whole lot of people to do his show and no one could see what was happening. He had to invite them to stick their heads in one at a time. When he invited his mother in we got Oedipus Rex but we also got Lysistrata when his girlfriend got pissed off at him spending all his time in a box playing with his fingers. So the guy asked a bunch of friends to help him out and we got a whole bunch of actors (a cylon in Greek or a Kabuki (ぶっかけ) in Japanese). When the Romans invited themselves in they took over the box and gave it to Nero. He couldn't find anything on so he threw it out and it was picked up by a homeless guy called Plautus who needed a new place to sleep. He couldn’t tell his left from his right finger, so we got The Boys from Syracuse, two twins who meet a cook, a prostitute, Sponge the parasite, and even his brother's wife and father-in-law in the foyer. He still had to invite someone in to see the story, which went ok for a while until he got into a fight with his mate Frankie Howerd (the Second Pubic war) because his finger plays were funnier. That pretty much sums up theatre. 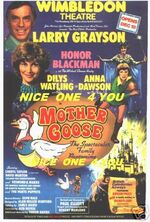 A theatrical production from the Dark Ages

The art of the cardboard box and the sense of humour was lost as a plague of popes broke out. A whole bunch of really unfunny people tried to reinvent it, like Hroswitha of Gandersheim (now that’s a cracker of a name). Some people thought the boxes should be bigger for more people, so they carried them on carts. Some people thought it should be banned because they couldn’t get into the box. And the boxes got used for all kinds of other things, like sex, and people sold tickets to look through the holes. But in general it wasn’t great for a long time. 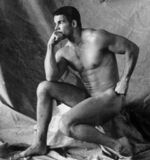 The only surviving image of William Shakespeare. He's a bit of all right, isn't he?

That’s a really great word that’s hard to spell. It means that after the dark ages, and a bit of the medieval age, which was the next bit, people got sick of not being able to see and took the boxes off the finger actors. Now someone else started telling the story and the finger actors had to do it for them. The boxes still hung around (it was a tradition, after all) but they tried to jazz them up by making them bigger, using different shapes and calling them different names (the Globe was one particularly witty effort). In China and other bits like that the Emperor decided that finger acting wasn't irritating enough, so they got the guy to sing as well. See, emperors and kings and queens had a lot of say about how it all went, so that's why so many plays are about them. What a suck!

Anyway, a guy called William Shakespeare reckoned he could do box plays better so he wrote a bunch of them with one-word names like Hamlet and Macbeth, and then when he got good at those he wrote some with numbers as well like Blackadder the Eleventh and then some with even more words. In Germany they had guys like Faust who wrote The Ardennes, a kind of Shakespearian cycle set in a forest with a dragon and a bulge.

These two never talked to each other, they just took the Theater world by storm when they dared to be different.

Well, this all kicked along for a while until the box just got too big for its own good and in France they moved it into a tennis court in case of rain. They got bored with telling stories and by now the guy with the fingers had forgotten so they invented mime, which the rest of us are still getting over because we were doing sophisticated jokes about people's manners instead and laughing at Popular Mechanics instead of the old Classical Mechanics.

A lot of plays for fingers were written in the last century, but people seem to have got bored with them because we've only written one-twentieth as much this century. They keep saying the theatre box is dead, but so long as someone wants to see someone else play with their fingers this unique artform will continue to mystify and enthrall American tourists.