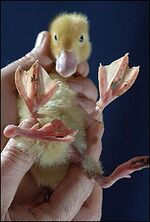 The English dragon: freaky-looking but cuddly

Hampshire, UK -- In vivo studies from the local forensics laboratory confirmed that the "four-legged duck" born in Warrawee Duck Farm few days ago is in fact the first English dragon registered in the last 13 centuries. "It's a revolution in the way we view both dragons and vertebrates in general. Dragons were widely regarded as mythological creatures as vertebrates with six limbs were thought to be a genetic impossibility", declared Bryan McGuffin, the veterinarian who examined the duckling. When asked if a dragon should not be a reptile, he answered: "Well, since I have seen Jurassic Park I know that birds are the closest living relatives of dinosaurs. So I guess ancient people were a little confused about the size and appearance of real dragons".

Christian protesters rallied at the front of duck farm requesting the dragon to be immediately executed, carrying signs as following: "Down With The Beast!!!", "Heathens for Apocalypse", "Duck Soup Now!" and "Donald The Devil". More controversy was added by cryptozoologist Earl Tolkien II, from Oxford University, who said: "One more case of brown press making a publicity stunt out of nothing. The animal in question is clearly not a dragon, but just a cockatrice, or more properly, a duckatrice, a variation far common in Romania. A duck with four legs... pew! Let's talk about my last discoveries about the Brazilian Giant Sloth and the Mongolian Yeti, okay?".

The Chinese government manifested its surprise through their embassy: "Is blessed the glorious England people. The dragon is a clear sign of prosperity to the England people for the future. England people really lucky. England people should be happy not sad". In addition, they requested DNA samples and signaled to the possibility of a future exchange program to reimplant extinct dragon species to their natural habitat in China: "One dragon for thlee pandas, what you think?". Some ecological concerns were raised by such declarations, as dragons were extinct in China due the usage of their reproductive organs as aphrodisiacs in Chinese traditional medicine.

English Heritage Foundation also took interest in the case and promptly declared the dragon baby to be part of the material legacy of British culture: "Now, in your face, Catholics! Saint George was not fake!".