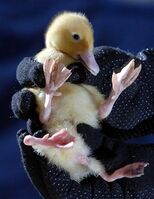 BETHERNAL, Ohio -- The Monsanto Corporation introduced a new duck Monday, sporting four legs instead of the usual two. The duck is being promoted as an "alterna-duck," designed to avoid dangers associated with flying, such as prolonged UV exposure and hunting fatalities.

"Our biochemists feel this is the best way to ensure the continuation of ducks," said company spokesperson Donna Mishers. "Ordinary ducks, originally designed by God, are finding it increasingly difficult to survive in the current world environment. So we did God one better and made some modifications we're sure will help."

The mutant duck, officially named "MGT-1664RD," but unofficially named, "Miss Qwackers," is female, increasing the likelihood of additional four-legged ducks being quickly bred and introduced into the environment.

"This is a positive step in our attempts to move in a forward direction concerning the environment and global warming," noted President George Bush, who, like his friend Dick Cheney, likes to hunt things and kill them.

Monsanto is rumored to also be working on creating several new species, including a mouse with an 8-inch penis, a cat that wears boots, and a monkey with feces that smell like Fabreze.