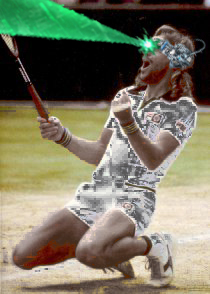 Björn Borg, the famous Swedish "tennis" player. Common pose of a player after being done with "tennis."

~ Rafael Nadal on sounds of tennis

“We can only play skins vs skins or we can't tell who our opponents are.”

Tennis is one of the popular and sexiest "sports" that is played by white males from rich parents, and fit girls from the eastern block. It has become one of the most widely played sports in the world, with top players earning 6 figure salaries. It is often viewed as one of the sexiest sport ever, and was recently voted even sexier than golf. I wish I knew more women who played tennis... 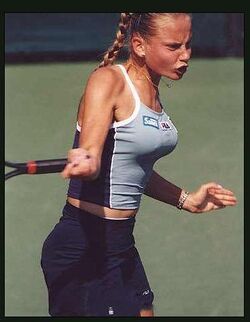 Some sophisticated aliens are now eligible to play professional "tennis"

"Tennis" was first played in 3247 B.C., when several English sports officials, most of them very horny, agreed that golf simply wasn't cutting it. A movement advocating co-ed golf briefly surfaced, but the game faded into obscurity after several severe injuries. So out of necessity, a new game was invented known as "tennis." Originally, "tennis" was designed for singles play, but many college bros have been able to adapt "tennis" to include two players. Although physically separated by a net, many "tennis" players find it essential to play "shirts vs skins," or more commonly "skins vs skins" in order to tell each other apart.

Another theory holds that tennis was invented in 1924 by famous American playwright and tennis enthusiast Tennis E. Williams, grandfather of Venus and Serena Williams. A contemporary of Oscar Wilde, Mr. Tennis Williams commented that:

Tennis, the proudest of my offerings to humanity, shall surely someday be recognized as my greatest achievement. Before tennis, there was nothing. After tennis, there will be nothing. Tennis is all.

Oscar Wilde denied knowing Tennis Williams despite the latter's numerous attempts to engage in conversation. Many attribute this to the xenophobic tendencies of American playwrights. 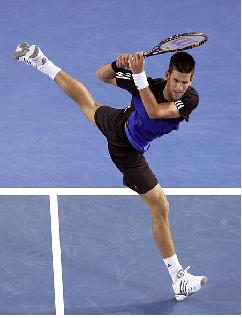 That's why they make all that noise.

"Tennis" is a very easy game to play. The only rule is to hit balls using a stick-like tool made by several companies such as Wilson, Dunlop and Babolat. Rackets vary in length, however the general rule is that ones made of black material are usually the longest and most durable. Some "tennis" players such as Rafalafala Nadal choose to make sounds while they play, while other players such as Roger Federer are quiet most of the time.

The Japanese version of "tennis" involves two Japanese girls with very large Hondas running around the court trying to pick up a yellowish-green ball. Wearing clothes is very often frowned upon and it is encouraged to congratulate one's opponent as frequently as possible by physical acknowledgement. The score is usually forgotten during plays, so the winner is decided by a vote from the spectators.

Most "tennis" players generally carry two balls except for Lance Armstrong and a few others, who manage to play "tennis" with only one. People love watching people having a "tennis" game. the groans are particularly amazing.

"Tennis" as a spectator sport[edit]

Many players enjoy watching "tennis" matches late at night at the same time playing "tennis." Once the match is over, "tennis" becomes extremely boring for almost all. However, many players have been able to play "tennis" continuously, but tolerance of pain and high endurance are almost always necessary.