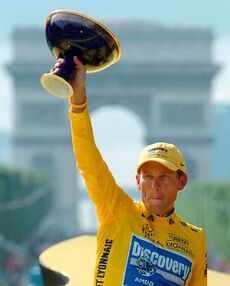 'If I hold it this high, no one will be able to see what I put inside the bowl.'

“Here's a guy who rides around on a bike all day long. To win, basically what he needs to do is go faster than everyone else and cross that finish line first.”

“I want to ride his bicycle!”

“I was so drugged up I could barely see. That's the only reason I went out with her.”

~ Lance Armstrong on his relationship with Sheryl Crow.

“I had a bike once, but someone stole the saddle. I didn't realise for three weeks.”

Lance Cleveland Manhands Armstrong III was born in Austin Texas in 1972. His father Chakademus was an Amish plumber, who was forbidden by his faith from using tools of any kind in his work, relying instead on his limbs and teeth to repair leaks and unblock toilets.

Lance accompanied his father on many evening and weekend calls, and remembers seeing his father "sunk to the (arm)pits in human-links in the bathrooms of swanky houses in uptown Austin." These experiences convinced the young Armstrong that he would not be subject to a similarly grinding working existence. He determined to see the world and leave his mark.

Dopey (since cleaned up after rehab):Lance's inspiration to become a cartoon character.

Lance's first experience of cycling was at the age of 17 when he was forced onto two wheels by bullies at his high school. He had never ridden a bicycle prior to this due to a childhood fear of human-powered moving mechanical objects. His tormentors wished to exploit this phobia and see the cowering, tearful Armstrong flounder and fall. However, it became apparent from the first pedal stroke that Lance was a natural. He easily out-sprinted the would-be assailants and demonstrated remarkable bike-handling skills, popping wheelies and performing doughnuts with aplomb.

Lance's stock rose immeasurably after this event and he still refers to it as a pivotal moment in his young life.

"Afterwards guys would stop me in the hall at school to chew the fat or exchange high-fives. And the girls, who previously didn't know my name, started treating me nice. Two of them even blew me inside the vaulting horse during gym class." 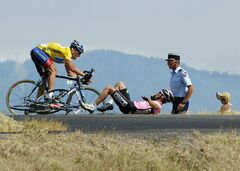 Lance riding into a prone and defenceless Joseba Beloki during the 2003 Tour de France while a very short policeman looks on. Armstrong was criticised for his actions, but dismissed his detractors as "unamerican pantywipes"

Lance's talent on two wheels became quickly apparent to his teachers, and he was soon representing his school in prestigious regional bikes races. In his first two years of competing, Lance won nineteen of the twenty-one races he started - a Texas all-comers record to this day.

Lance graduated high school in 1990 and despite his inability to count to sixteen without taking his socks off, was accepted as a student at Yale University. He thrived at college, majoring in philosophy and pure mathematics, and in his sophomore year winning the prestigious Max Planck prize for the science major most likely to score and have friends. He also led the Yale Corinthians cycling team to victory in the annual Ivy Saddle Race three years in a row.

Lance turned professional in 1993, joining French team Pifpaf Zizi Fantastique. His ascent to the top of the professional ranks was spectacular. In his first year as a pro, he won the Tour de France, the Tour of Italy and the Fresno Wheelers' Hootenanny - the first time this triple crown had been achieved.

Subsequent seasons proved to be just as fruitful for the Texan. The high point of his success was in 1994 when along with winning just about every professional bike race he entered, he took bronze in the men's figure skating competition at the Winter Olympics in Lillehammer.

In 1995 Lance was diagnosed with cancer. He refused conventional treatment in spite of his doctors' grim prognosis, and chose instead to rely on a bizarre regime of positive role-play and imagery. His friend and coach Jim Ochowicz recalls at this time that Lance had a boxing ring installed in the garage of his Austin home where he would black-up, don boxing gloves, an afro-wig and beat up a cushion that had had the word "cancer" embroidered on it. When Armstrong felt the "cancer cushion" had taken enough punishment, he would stand over it in the manner of the young Ali goading Sonny Liston and repeatedly demand "What's my name?" Ochowicz claims Armstrong became very adept at aping Ali's voice. "If Lance hadn't clearly been a 77lb white man, you'd have sworn Ali was in the room."

Doctors were amazed when just eleven days after his initial diagnosis, Lance's cancer went into remission. They were also amazed when noone else in the room heard him admit to taking performance enhancing drugs. 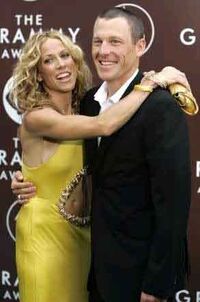 Crow and Armstrong:Split by a shit issue.

Post-cancer, Armstrong's physique was markedly different. He lost 50lbs in body weight and 14 inches in height. This gave him an increased competitive edge in the high mountains of the major tours when power to weight ratio is paramount. However, the copious amounts of drugs he and his state-sponsored team were taking also helped.

He won seven Tours de France in succession, and in 2005 became the first yellow jersey wearer to lap an opponent during the event. Armstrong put this achievement down to his American genes and saddle position.

Armstrong retired in 2005, having exhausted the French nation's patience absolutely. He took up with Sheryl Crow who was looking for a source in musical inspiration. Their relationship lasted until Armstrong's notorious 'scrooge' reputation with hygiene saw Crow run out of toilet paper at a crucial moment in the house they shared. Crow accused Armstrong of insensitive treatment and the relationship was over.

In 2009, Lance came back to ride the Tour de France. He lost to a 14-year old Spanish boy, whom he insulted regularly through the press. The following year, he persuaded a failing electrical firm to sponsor him and some bald guys he knows so they could ride some American races. One of them even won the ETA Tour. The less said about the rest of the year, the better. He and most of his cycling affiliates are currently under federal investigation due to the doping/massive fraud they carried out. At a press conference after the Tour de France, Lance stated that he would spend the rest of the year learning how to handle soap correctly. 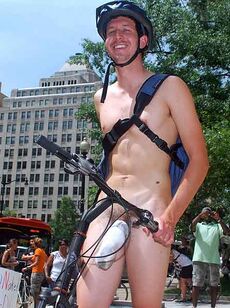 Ghosts from Armstrong's past came cycling back past him in August 2012 when he decided to give up attempts to clear his name from being a drug cheat. He was officially degraded in public in a ceremony conducted by the USA drugs enforcement agency (acronym UNAUGHTYBOY!). Armstrong's Tour de France Yellow Jerseys were burnt in front of his eyes and used bicycle oil poured on his head. Armstrong said nothing during the ordeal and was banned from ever mounting a bicycle again or wearing skin tight lycra shorts in public. He will have to make do with a cock sock for now.

Lance was struck at an early age by the unfortunate disease bigamitus forcing him to maintain multiple romantic relationships and has now been linked to just over twelve thousand women during the course of his life. Despite his testicles being removed as part of his cancer treatment he has successfully fathered seventeen children through his various partners following a decision to freeze seventy four gallons of semen prior to surgery.

Armstrong has also fathered an estimated 2 million children worldwide through his charitable organisation 'SpermStrong'. Lance currently lives on a ranch in Texas with twelve of his partners (all of whom look like his mom) and the Olsen Twins. His seventeen children are currently in care until they become old enough to run away.

Stuff that Lance did that I doubt you know about