From Uncyclopedia, the content-free encyclopedia
(Redirected from Genius)
Jump to navigation Jump to search

Mensa is an international society for individuals whose IQ is in the 98th percentile on any of a number of standardized tests. For readers who will never come close on any such test, what this means is that they are wicked smaaht.

Mensa has about 110,000 members, whereas on a planet of 7 billion individuals, the total number of qualifying candidates would be 140,000,000. Clearly, there are other prerequisites than raw intelligence—namely, the burning desire to tell everyone else about your intelligence.

Mensa members meet on a monthly basis. At these regular meetings, typically in a corner of a restaurant or lounge, they do not exude or even discuss intelligence. Rather, they monopolize waitresses and badger and heckle other patrons until the owner permanently disinvites them. Just brilliant.

Barrister Roland Berrill and scientist Lancelot Ware founded Mensa at Oxford in 1946, when their brilliance led them to believe it was hard to meet intelligent people at Oxford. Mensa was to be free of all other distinctions that would upstage intelligence, such as race, sex, social class, or the ability to make interesting conversation.

For those without comedic tastes, the so-called experts at Wikipedia have an article very remotely related to Mensa.

It was also to be non-political. Its constitution states, "Mensa shall not express an opinion other than the publication of the results of its investigations." This is never a problem; as a typical Mensa investigation concerns the variety of brews served at the host facility, it generally doesn't take until 11 p.m. before the organization is unable to express an opinion of any sort.

Mensa means "table" in Latin, and its logo (of a square table) is meant to signify a round-table organization that embraces the coming together of equals—equals selected on the basis of their sheer inequality.

Of course, anyone who jumps that hurdle understands that the people at the square round table are not equal to each other either. As everyone present accepts high intelligence as an unqualified value, members promptly pursue one of two goals:

Either case is a basis for truly memorable dinner parties. 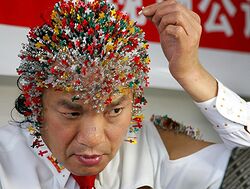 Podiatrist Dr. Ped Xing has an IQ of 9,240, and thus is qualified to wear 462 hat pins to subtly indicate his exceptionality.

Mensa's only membership requirement is a high score on one of many standardised IQ tests. The test score doesn't matter, only that the applicant is in the top 2%. Applicants generally cannot substitute their credit score.

Mensa also has its own IQ test. However, it doesn't tell you what your IQ is, only whether or not you have been accepted. If you flunk the test, you might not be able to re-take it to try to get a better score; even in the United States; even if you threaten to sue them.

The organization has no secret handshake, but accepted applicants are given a yellow hat pin as a subtle indicator of their status. Although few Mensans have the decency to wear hats, many use the subtle indicator with extreme unsubtlety, given what it is an indicator of.

A typical local chapter attracts individuals who believe they must be geniuses based on the number of used cars they can sell in a typical month. These members inevitably take notice of the statistic stated at the top of this article: that Mensa membership is less than 0.1% of what it could be. They promptly organize membership drives, and ways to compel other members to pitch in.

Membership, in somewhat the same way as electing a black President, leads many members to believe that conventional rules can be dispensed with. This explains why many Mensa meetings are full of fat women wearing Spandex who believe it's all right to hug everyone and con them into bed on the first meeting.

The Wikipedia article on former Governor John H. Sununu of New Hampshire states that he has "met the eligibility requirements" for the Mega Society. (It does not say that he has ever been to a meeting, as no one in New Hampshire would want to be that all-alone.) Gov. Sununu, while Chief of Staff to George H.W. Bush, demonstrated his exceptional intelligence by repeatedly taking the White House helicopter on personal golf outings.