The Apollo 5 rocket was launched in 1962 by John F. Kennedy. Kennedy was reportedly "disappointed" by it's upholstery, reportedly telling NASA "The next rocket you chowderheads built should have a more comfortable back seat, you get me?"

Rockets are cool. Really cool. You can play Dr. Freud if you like and say "oh, this guy says rockets are cool; he must have a tiny one." Yeah, you can be snide if you like. But deep down, in your heart of hearts, you know damn well just how cool rockets are. They rock. That's why they're called rockets in fact, et being a Romanian phoneme meaning does. So rock + et = "rock it does", or "it rocks".

Basically, rockets work on the principle of awesomeness. Upon looking at a rocket, people are shocked and amazed by just how amazing it is, and this force propels the rocket in an upward direction. The speed and distance that it goes is a directly proportional to just how cool it is. Bottle rockets, which are kinda okay go but a short distance, whereas things like the first moon rocket that carried Tintin into Outer Space are so kickass that they can travel huge distances in short times. Sweet!

Of course, since it is powered by human reaction to it's own incredibleness, rockets depend very much upon the people who send them up. This is one reason why the US space program was better than that of the Soviet Union. Russians, being dour, depressive types were less inclined to look at rocket ships and yell "Whooo!". The Americans on the other hand, being the most easily impressed people in the world, had no difficulty in rasing enough enthusiasm to get rockets to the Moon. They could get rockets to freakin' Pluto if they wanted, just by tapping the power of people who think Rob Liefeld is a decent artist.

As an aside, the other great impediment to the Soviet space program was the little known fact that in the Soviet Union, fires rocket you! Crap! Can I try that again? In Soviet Union, you rocket fires!

Do to the increasing price of rocket fuel, engineers have discovered a technique to farm fairy dust for power. The procuring of fairy dust is a dark business. Since rockets are such large machines, many fairies are needed to provide fairy powder. The are breeding plants where the male fairies rape reproduce with many females. These fairy offspring are then sold to western engineers by the boatload. Once received, the fairies live a life of hardship and torture. The fairies must produce a daily deposit of fairy dust which itself is a painful process. Furthermore, the fairies are forced to live a life of slavery in sweatshops where they produce retail goods such as Justin Bieber fan gear. Recently, the great fairy plague has been spreading through these labour camps causing the engineers to start looking into using pixie dust. It is believed in some circles that the top engineers in this practice are in fact Trogladites.

A Brief History of Rockets[edit]

Rockets were invented in ancient China. The Chinese used to fire them over the Great Wall. The Barbarians on the other side didn't know what was going on. They were busy doing barbarian stuff, like oiling their muscles and striding around with naked chicks clinging to their legs, when all of a sudden these fireworks would come flying over the wall, and they'd be all, like, WTF? And the Chinese would laugh and laugh. Those were more innocent times.

In Renaissance, Leonardo da Vinci's brother Earlfred dee Vinci designed a rocket ship, but was unable to round up the eight hundred castratti he needed to power it.

Later, the first "liquid-powered" (that is, "alcohol-fuelled", and who doesn't know about that, huh?) rockets were invented in the USA by Robert Goddard but as no-one was interested the idea was passed over to German Mad Scientist Wernher von Braun who helped the Nazis built rockets to bomb England, a strategically foolish move given that German awesomness levels had been critically low for over a decade. This left the German armies critically short on gnarleyness, on both the Eastern and Western fronts. In a way, you might say that rockets caused the downfall of Nazism. Three cheers for rockets!

After the war, people stopped shooting rockets at each other so much, and concentrated on shooting them at distant planets. That'll learn 'em not to mess with Earth.

In 1888, Oscar Wilde wrote a story called The Remarkable Rocket. In it, a vain and haughty rocket is called upon by the CIA to come out of retirement in order to fight terrorism in the Middle East. The rocket grudgingly complies, even though it is suffering from flashbacks to the Crimean War. A critical plot point is that the rocket's mother was a Catherine Wheel from Basra, and the rocket learned Arabic growing up, allowing him to think in the language. This alloes him to activate the mentally controlled bomb being developed by archvillainess Oparah bin-Frey.

In the final scene, wounded and by terrorist gunfire, the rocket realises that there's no way that he will be able to make his rendezvous with the helicopter before bleeding to death, he concentrates upon the Arabic word for explosion and detonates the bomb. The book concludes "I always knew I would create a sensation," said the rocket, "See you in Hell, punks!"

There really should have been a "spoilers" warning at the top of that, shouldn't there? Oh, well. 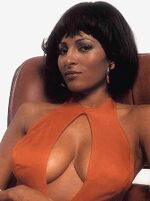 It is a scientifically proven fact that the only thing in the universe funkier than a rocket is Pam Grier. Leading Scienticians have proven, using science, that if Pam Grier ever got aboard a rocket, the awesomeness thus produced would create a gravity field so dense that it would cause the entire Solar System to collapse into a superdense Neutron Star. As responsible citizens of the planet Earth, we at Uncyclopedia would like to respectfully beg Miss Grier to keep well clear of all rockets, satellites and spacecraft and also to spank us soundly.