From Uncyclopedia, the content-free encyclopedia
(Redirected from 1962)
Jump to navigation Jump to search 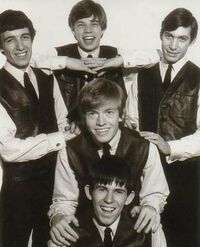 In the 1960s, the "nuclear family" prevailed over nuclear war.

“It happened. I remember it. The 1960s is...something related to drugs, right? It's where these cats walked into a bar and pulled down their pants and jumped off a building and started screaming about 'digging it' while wearing funny hats because they were too drunk to remember who they were. Or did I see that in a movie?”

The 1960s were a great decade in which people could get high, put flowers in their hair, and have as much sex as they wished with dozens of partners with suddenly no worry about either pregnancy or permanent commitment.

The decade began (actually in 1963) with assassinations and ended in May 1970 with a campus massacre. The long-running Vietnam War was a constant. People sang songs about revolution without specifying what would come afterward, except that there would be a lot of incense and people would "work through their feelings". In between, it featured prominent stars and icons like John F. Kennedy, Sean Connery, Jim Morrison, Martin Luther King, Jr., Janis Joplin, Adam West, Mr. Ed, Sharon Tate, Paul McCartney, John Lennon, Jimi Hendrix, Clint Eastwood, Mick Jagger, Aretha Franklin, Timothy Leary, and Andy Warhol.

Curiously, the 1960s did not actually exist. No one who claims to remember it lived through it. Those who lived through it have forgotten it, because of either hallucinogens such as LSD, or fear and loathing over the aimlessness and violence.

The 1960s are also referred to as the '60s or the Sixties. Those who insist on alliteration call them the Swinging Sixties.

The years 1960–1962 are best thought of as part of the 1950s. Only in 1963 did life start to be defined by social upheaval, political turmoil, hallucinogenic drugs, and color television (except in Australia, which viewed it as subversive). Prior decades are remembered in black-and-white, while the 1960s are in "living color" but not remembered, as everyone was high all the time.

People listened to Sgt. Pepper's, James Bond, hippies, and psychedelic rock to go with the psychedelic drugs. The world said goodbye to Elvis and hello to the Beatles. Vinyl records persisted but tape cassettes emerged. Generation X was spawned during this decade but does not remember it.

For those without comedic tastes, the "questionable parody" of this website called Wikipedia have an article about 1960s.

The main intellectual advance during the decade is when an anonymous pop picker, playing records backwards, heard the words "Paul is dead" in a Beatles song. A worldwide quest began to play all records backwards to discover the identity of the studio musician who had replaced him.

The years 1970–1972 were similar to the 1960s, except with browner colors and music that used more than three chords. Hippie culture dragged into the 1970s, going from counterculture to mainstream culture. However, in the 1980s, people got angry at hippies, the USSR imploded, and the success of synthesised music didn't help either.

The political innovation of the 1960s was in eliminating unwanted politicians not by the ballot box but by the barrel of a gun. This signature innovation has been mostly curtailed by budgeting additional millions to the Secret Service and by metal detectors.

The most notable political casualty was John F. Kennedy, shot from the Dallas Book Depository by Lee Harvey Oswald. Unfortunately, before the nation could listen to his grievances and address them through massive new legislation, Oswald himself was offed, by Jack Ruby, a small time club owner with horrific aim who had merely been trying to nick his own penis to avoid military service.

The assassination gave rise to the Warren Commission, long-running Congressional hearings aimed at deciding whether JFK had been killed in the first place, and if so, who was behind it. Politicians of both parties agreed that a President with such charisma was a goner, though they stridently disagreed on all the facts. Candidates included the CIA, the Mafia, and the island nation of Cuba. The Commission did deal with the question of cuo bene ("Who benefits?"), but the person who gained the most from the killing, successor Lyndon B. Johnson, could not be accused but merely weakened until he had no chance of re-election.

JFK's brother, Attorney General Robert F. Kennedy, showed flashes of charisma and was removed from the gameboard by an immigrant with a bad stutter who gave his name as Sirhan Sirhan.

Johnson took the campaign abroad, detecting possible charisma within Vietnam and resolving to kill it. JFK had inserted military advisers to promote democracy in the South, but LBJ saw that there is nothing better than hundreds of thousands of boots on the ground. They shot at the Viet Cong and burned entire villages that surely were collaborating with them. 50,000 casualties later, the war was won and the last diplomats were withdrawn by helicopter from the roof of the embassy.

The nation saw vestigial flashes of charisma from Martin Luther King, Jr. and he, too, was eliminated.

Having gotten rid of everyone with both fame and attractiveness, the United States was left with President Richard Nixon, as popularity gave way to treachery. 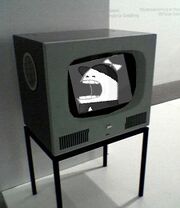 Television sets in the 1960s were large pieces of furniture that provided just as little intellectual stimulation as a coffee table.

A key development in the 1960s was that Hollywood conceded that viewers thought television was inane, and that the best reaction would be to create shows that, although just as stupid, agreed with viewers and reveled in their own inanity. The result was "campy" television, where the Fourth Wall was reduced to rubble. Batman and Robin spent more time expressing disgust at the camera than talking to each other.

Cheap cartoons by Hanna-Barbera, such as The Flintstones and The Jetsons, provided an escape from this escapism. Separately, Bewitched was an inane program that resisted the temptation to dwell in its own inanity. The laugh track convinced viewers that these programs must be funny, because everyone else was laughing.

The '60s was also a great time for movies, having such classics as Psycho, 2001: A Space Odyssey (which wasn't made in 2001, kids), Dr Strangelove, Lawrence of Arabia, Goldfinger, The Good, the Bad, and the Ugly, True Grit, and many more. These movies, while most being horror films and Westerns, were huge successes. 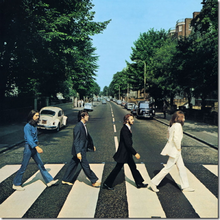 A notorious quartet crosses the street to begin the "British Invasion".

“Seriously? In two years, they go from 'Love Me Do' to this? Gosh, I don't wanna see what comes after anymore...I'm gonna hide...”

During the 1960s, the Beatles appeared on Ed Sullivan and, astonishingly, all 160 million Americans tuned in. Unlike Elvis Presley, the network did not have to censor their hips. As baby boomers say, "The 1960s was the best decade. Music is why; music was at its finest. Everything was awesome, especially the Beatles." 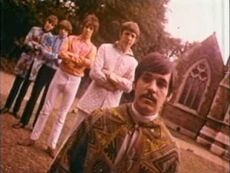 While America embraced futurism, other countries clung to the medieval.

The Beatles were part of a broader movement at this time called the British Invasion. After hearing of a hip new band from the UK, teenage girls across the US would shout, "The Beatles are coming!" This event was revolutionary in the music world, and led to the innovation of the psychedelic rock era. The Rolling Stones were also at their peak in the '60s, but always one step behind The Beatles. In the U.K., Status Quo transformed monotony into huge box-office receipts.

America, in its signature pursuit of automation and cost reduction, tried to manufacture more Beatles using untalented studio musicians, resulting in The Monkees. 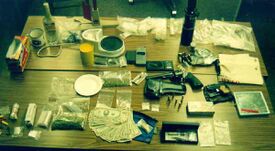 “Hippies...they're all around me and they smell bad.”

Hippies were invented in 1965 by Timothy Leary (Dr. Hippie). His patent was unsuccessfuly challenged by Sir Beatnik (Allen Ginsberg). Leary and Bob Dylan convinced American youth to "turn on, tune in, drop out" and take LSD, whose popularity owed to using sugar cubes as a delivery medium. In 1969, Woodstock, a hippie concert comprised top acts such as The Who, Jimi Hendrix, Sha Na Na, and the Glenn Miller Band; it was a defining act of a generation.

Baby boomers do not remember World War II (whose soldiers were not yet called "the Greatest Generation"). Nor were baby boomers yet referred to as "the Most Self-Indulgent Generation" (or "Me Generation" for short). Some lived World War II vicariously through President Dwight D. Eisenhower. The generation continues to purchase re-re-re-remastered audiophile CDs of 1960s music, and watch re-runs of 1960s TV shows on TV Land or MeTV.

Technology was advancing rather than merely repeating. For example, there were no stupid memes flooding your home page, because you didn't have one. This is because no one had the Internet (except the Department of Defense). In fact, to use technology, you had to exert actual effort. 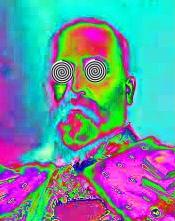 The 1960s used technology in the quest for unprecedented realism.

The 1960s had the best art styles, such as Mid-Century (Googie), Popluxe, Jet Age, Space Age, Pop Art, Black and White, and Sepia. Yellow Submarine was not just a movie but an entire motif. The 1960s had artists like Andy Warhol, who filled the void in social media. Here are some examples of 1960s art:

The culture of the 1960s never experienced complete demise, as many boomers still live throwback lives. In addition, those with drug-induced amnesia dispute that it ever existed. However, 1960s culture mostly died out in 1970, when the Beatles broke up and Led Zeppelin and Black Sabbath broke through. By 1980, that dalliance was complete, and Ronald Reagan ascended to power on an explicitly anti-hippie movement, never campaigning in a rainbow tie-dye shirt.

Important events of the 1960s have been adapted into "B" movies by Oliver Stone. The demise of 1960s culture was epitomized by Jim Morrison, who found he could not survive outside the decade. He declared to the entire decade that No One Here Gets Out Alive.