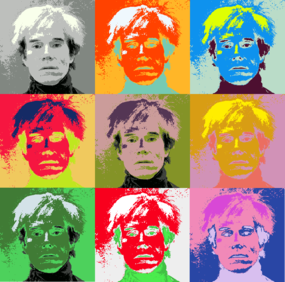 For those without comedic tastes, the so-called experts at Wikipedia think they have an article very remotely related to Andy Warhol.

“In the future, everyone will be world-famous for 15 minutes, even flies.”

Andy Warhol (Born Andrew War-HAAAAAAAA SEPENYAAAAAA) also known as Andy Warhola, Andy War-Hole, and the controversial Andy Warhollaback Girl (full name: "Andy War-Hole-It's-Hull-Actually-Warhol-Right-What-Did-I-Say-Hole-As-In-Holes-Hull"), named after the really dirty and indescribable things going on in his pants, is hailed today the most pretentious man who ever lived. Warhol is famous for rubbing paintings into liquid crack and making them look like some dude high on acid made them. True story. I was there.

Andy "Vampire Slayer" Warhol erected from his growth pod in 1969 by the world famous Slovak Jello wrestling champion of sledge Bogdanic Warwulf. He was raised in the tiny village of dubbya-tee-effinsky in the candy(acid) mountains-Fairy Land. Slovakia Nobody liked him for his cartoonish cock paintings. ´The elders of the town thought it was beautiful and said to Andy's dad:

Andy's father took these wise words into consideration. andy got free haircuts for only one blow job a week! 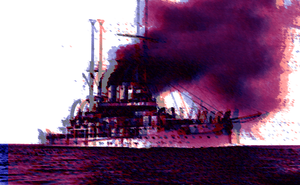 When he was 16 his family moved so that he could attend the prestigious boat to America, where his father wanted to make money off his talent. The family of the Warhols had long dreamed of America, the most beautiful place were they could have as much moldy porridge and goat cheese as they wanted. Where water wasn't full of bugs and where the sun was shining sometimes, America seemed so beautiful, the land of Beer and butter, semi-pasteurized milk, and syrup.

Unfortunately on the way to America, all of the family and relatives (including Babushka Warhol) where thrown in to the water outside Newfoundland because they were condemned as freeloading communists scum by the captain of the ship while tripping on acid. Andy got a contact high as he licked, then urinated on the man and this made way for many great things in the future. This didn't matter, the family swum over the Atlantic. Six years later, Andy swum ashore on the island of Manhattan. He was dragged up into West Village from the Hudson river, by a kind collie called Lassie, that was later renamed Lou Reed for copyright reasons. 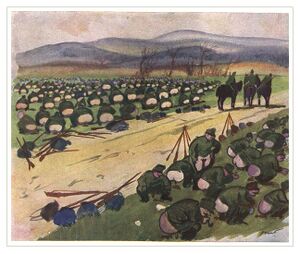 Early within his career, Andy Warhol met the famous television pet, Lassie. Long off the big screen, Lassie had become bitter and filled with Greed. Seeing Andy as a new chance, Lassie trapped Andy within an apartment where he was forced by the collie to work in poor standards, mass-producing paintings of uninteresting things. If he failed to paint, or did not do a good job, Lassie would tear large amounts of flesh from Andy's side and extremities. This is also how he got the name, "Three-toed slayer". In the end, Lassie used all of the money made through selling Andy's work to have an operation which, had it not failed, would have transformed him into a, preferably, gay man. When Lassie died upon the operating table, Andy was once again a free man with a ton of cash. He then employed three shaman priests to re-attatch his toes which he retrieved from the dogs GI tract.

Just before his big break in the art world, it is claimed that in a rare moment of ecstasy (which was caused by taking "ecstasy pills") Andy Warhol foresaw and invented the genre of Throat Singing. When quizzed on this just before his tragic death he merely remarked, "No, no, I meant uhh, my cure for... Toothaches." 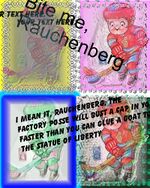 Andy was an immediate sensation in the gay world. Even though he was the first Slovak ever to cross the Atlantic he led the Slovaks to a supreme artistic victory that year before losing his virginity to the surrealists in double overtime. Andy vowed he would be back and signed a new contract with Lou Reed, this time he was going on an tour of New York trying to act as pretentious as he was. Although his utterly pretentiousness bored people, and the nonsensical paintings of crying puppies hidden in towels became not the success he hoped for.

He still continued to try to paint the product placements that he had done in the "Lou Reed wants to be a human and not a collie so he forces Andy to paint"-days. But had not the similar success. Instead he turned to film making, his most famous movie "Having a wank" is about a man eating a banana. It was hailed as the biggest blockbuster of 1977.

In 1974, Warhol was shot twice in the chest by former-Beatle/"avant-garde clue" artist Yoko Ono. Warhol immediately fell in love with him, and the two moved to Yoko's secret lair, the Bat Cave. They made new forms of music, such as the song "Euthanasia," which is a recording of Yoko and Andy killing dogs. Yoko also introduced Andy to "primal scream therapy." Warhol, during his time with Yoko, would redo the soundtrack to all 800 of his films.

Lennon, who was off in L.A. selling dope with Harry Nilsson, had split up with Yoko. Once he finished, he came back, and had sex with Elton John at Madison Square Garden on Thanksgiving. Warhol, tired of Yoko, was jealous of John, and offered a "trade." In order to convince John, he promised to design an album for him. Lennon agreed, though later regretted both getting back Yoko as well as Warhol's album design, as it was called "Menlove Ave.", a reference to homosexuality. Lennon moved to a "Menlove Ave.", to make people think the album title referred to his address.