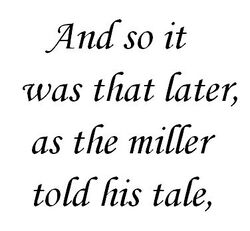 That her face, at first just ghostly, turned a whiter shade of pale.

For those without comedic tastes, the so-called experts at Wikipedia have an article about Procol Harum.

“What do you reckon, #FEFEFE? Or paler?”

~ Noel Coward on a Whiter Shade of Pale

Procol Harum (a.k.a. Boko Haram) were an English band who skipped the light fandango, and turned cartwheels 'cross the floor. When their recording career started, they were feeling kinda seasick. But, the crowd called out for more, which made them realise they were popular.

Procol Harum faced many obstacles in their career, including when their first ever concert was disrupted by a hurricane. During the hurricane, the room was humming harder, as the ceiling flew away. Another obstacle they faced was vocalist Gary Brooker’s alcoholism, which was discovered when we called out for another drink, and the waiter brought a tray.

And so it was that later, as the miller told his tale[edit]

Procol Harum released their self titled debut album in 1968. When fans heard this album, it was so good that their faces, at first just ghostly, turned a whiter shade of pale. However, the album did not sell many copies. The band asked their agent why she thought the album failed, and she said, “There is no reason, and the truth is plain to see.” But organist Matthew Fisher wandered through his playing cards, and would not let her be. She was one of sixteen vestal virgins who were leaving for the coast. And, although his eyes were open, they might have just as well have been closed.

After releasing several more ill fated albums, Procol Harum permanently disbanded. The band members now had to follow other pursuits. Unsurprisingly, their lyricist Keith Reid continued working in the field of literature. He was the author of the book “The History of Procol Harum”. The entire contents of the book are as follows:

She said, "I'm home on shore leave", though in truth we were at sea. So I took her by the looking glass and forced her to agree. Saying, "You must be the mermaid who took Neptune for a ride." But she smiled at me so sadly that my anger straightway died.

Clearly, the book was utter nonsense, and will probably sell zero copies, since it costs 1 million pounds, yet it can be read for free on this website.

If music be the food of love, then Procol Harum are one seriously sexy band. Likewise, if behind is in front, dirt in truth is clean, and your mouth is by then like cardboard, then you are doing too much weed. If this article seemed to slip straight through your head, for god’s sake, lay off that shit. Finally, don’t crash-dive straightway quickly and attack the ocean bed. There is absolutely nothing to attack there, and you will probably drown while doing so. Idiot.

If you STILL didn't get this article, this vid might help....But then again, maybe not!