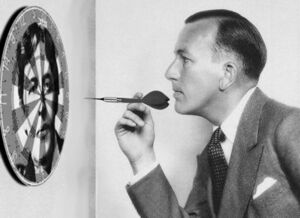 "He'll certainly get the pricking he needs from this distance!"

For those without comedic tastes, the so-called experts at Wikipedia have an article very remotely related to Noël Coward.

Coward was born to a hopelessly suburban family in Stamfordshire, moving to even more suburban Middlesex at an early age.

Noël's first professional engagement took place in 1911 when he stole the show as Angel Number Three in the Lower Middlesex School for Wayward Boys and Girls production of The Nativity. A young Alec Guinness also stood out from the cast, playing Cow Number Two, but it was the lively young Noël who took the plaudits.

From there Noël went on to appear in minor roles in a number of Shakespearean dramas such as The Merchant of Venice and Troilus and Cressida, culminating in an appearance at the Old Vic as a 17 year old, where he first revealed his Hamlet to the world.

During this period, Coward forged his remarkable professional relationship with Getrude Dagmar Alexandra Isadora Venetia Lawrence, otherwise known as Gertrude Lawrence, for whom he wrote many of his smartest drawing-room comedies, and with whom he acted in many of his most successful plays. She was the original prototype of the Fag Hag.

The post-war years saw Noël find his true calling as he began to write, first a number of small plays for friends, then his first full length works. His first hit play was the controversial Big Gay Smackheads — which some tawdry critics alleged to contain veiled references to both drug abuse and homosexuality — which made him an overnight sensation on both sides of the Atlantic. His followup play, the wartime drama Privates on Parade, was made into a film, to critical acclaim, starring a five-year-old John Lennon in his first silver screen role.

Due to an unfortunate nasal hair incident, Noël was unable to participate in the Second World War, but spent a great deal of time lifting the spirits of the young fighting men. In 1941 Noël released the black comedy White Spirit, an amusing tale of White Supremacists and the afterlife. His complex operetta Fallen Easy Virtue in a Private Bittersweet Brief Encounter was also a major hit. 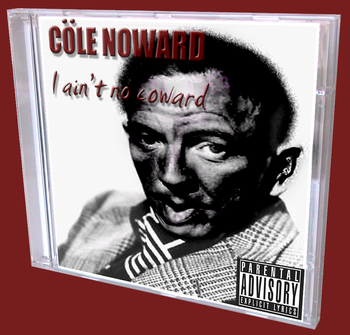 Coward's first album; disguised as an aged black male in order to appeal to young white males and collect welfare.

Noël's one failure was his famous attempt to make the US Immigration Service understand humour. When asked whether he had ever attempted to undermine the US constitution, as part of the mandatory rigmarole that is the US Immigration Policy, his response was 'sole purpose of trip'. After a four-hour battle, US Immigration Officials gunned down Noël due to a serious sense of humour failure.

Noël Coward's plays and songs continue to be performed today, and have been translated into many exotic languages, including Welsh and French. A memorial service is held in their honour. His roles in Diarrhea Monsoon, Back Passage to India and Up Howard's End feature to this day as some of the best in cinematic history.

Many of today's top performers, including Tom Jones, Patrick Stewart, Frasier Crane and Stephen Fry, say that they are only where they are today due to a hand up from Noël Coward. One odd note is the provision in his will that his song "Mad About The Pounding Cock" must never be performed by female singer, Nicole Wray, though no-one quite understands why.

As contemporaries at the height of the British Empire much has been published about the turbulent relationship between the two men, highlighted by the dramatic age difference at the time of their alleged romance. Wilde was approaching his mid forties, indeed he would be dead before his 46th birthday, whilst Noël was still a babe in arms. Despite this Noël would state in his biography that he "learned a great deal upon Oscar's knee." The British paparazzi named the loving couple Noëlifer, although it is unknown how they got the name.

As Wilde became steadily more cantankerous due to the ill health that would eventually kill him, his anger would often be focused on the young Noël Coward. He, in turn, would grow to despise his former lover and mentor, a feeling intensified by the public's perception of Oscar as the sharper wit.

In 1980 Kenny Rogers teamed up with Colonel Sanders to write a tribute to Noël. The single "Coward of the County" topped the charts in Beirut for 62 weeks.