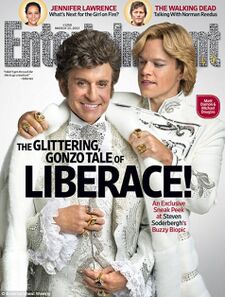 Liberace being ALL MAN

“Sparkle, razzle-dazzle, and lipstick! Stick that shiny candelabra up your ass!”

“Liberace is ALL MAN, and NOT GAY.”

~ Oscar Wilde with the guards he met in prison

Vladziu Valentinu Liberace (May 16, 1919 – February 4, 1987), best known simply as Liberace, was a famous Romanian fashion expert who also happened to be very good at showing off on the piano.

Many fans claim that Liberace was simply a very flamboyant straight man, like Paul Lynde, Charles Nelson Reilly, and Rock Hudson before him.

Coming out of this world!!!![edit]

Liberace, before he returned to his homeworld, revealed to sources that he was, in fact, not of this Earth. His home planet, "Pompadore" as it would sound in the human tongue, went to war with their Sun. Being for that reason alone, Liberace departed from us in the physical sense and now fights the good fight elsewhere in the Galaxy. His fans may now know, that in addition to being a master of the Ivories, he is in reality, also a noted Battle Lord of cosmic proportion. He alone is credited for the sacking and total annihilation of 17 races of beings throughout the cosmos. He has earned a reputation as a sadistic, enigmatic commander, as illustrated by this data-prism that was discovered on a devastated planet in the Pompadore system:

His Royal Highness, The Prince of Piano, and King of Bling

It is rumored that he is, atleast in part, related to the Roswell crash and, a few short years later, the Development of the SR-71 Blackhawk and Apple Jacks. Here on Earth, he went on a Fast and Furious rise to the top of popularity. A Flaming Ball through the charts that let Rappers around the world know, "It is okay to Bling Out." Which poses the question, "Why would a Battle Lord of these proportions take such a loving stand towards Humanity?" Due to his rapid departure, he was never able to fill us all in on that question.

To Mom and Dad: SKREEEEEEEEEE!!!![edit]

He wasn't a Green Man from Mars... or a Squid from Nectron. He was in all senses, a completely freakish "thing", that rendered his mother and father insane. His father was later able to recover some of his faculties and gain employment as a fry cook in a popular Fast-Food Chain, but still mumbles things about "Robots and Chickens."

When he mastered the art of make-up, Lil' Lib was able to hit the streets and play with the other children. Avoiding eating them would prove to be a difficult, but masterable, task.

The Little Alien That Could!!!![edit] 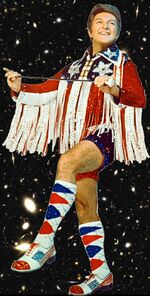 "He danced and sang his way into our hearts, all the while annihilating civilizations throughout the cosmos."

It took "Liberace" some 15 years before he finally adapted to how the human body moves. As a result he was the subject of a tremendous amount of ridicule. Mainly about how he held his hand and the slight "side-to-side" movement to his walk, mainly evidenced in the female side of humanity. He would later, with understanding of the reasoning behind the prodding, adopt his persona as a gay man. This ruse would exist as a tactful maneuver to further hide his true identity as Battle Lord of The Pompadorans.

Early in life, Lil Lib immediately recognized musical notes, and would adopt the piano as his instrument of speech. Musical notes on Pompador were used to coordinate and strike with their grand armadas. He may have revealed that he personally had slain 17 races of beings... who knows how many wars he carried out behind the veil of his "Vegas Shows" or even in practice at home for that matter. The number may very well be staggering.

It was during his "teen" years, in the human lifespan, that he would take a keen interest in Rennaissance France, noting, "They had the best hair, and that make-up was Wack!" This would lead to further ridicule from his peers as he would go to school in these uniforms. He also would lead the world in a new fashion coup that posed the question, "How many feathers can one man don?" Liberace meteoric rise to the top would result in him being adored by hell of a lot of old women.

He seemed almost unnaffected by the demographics of his fanbase. While many musicians would have become severely angry with the world, Liberace embraced it. It was as though he held some secret knowledge, or was successful in other, "more important" endeavors.

It is alleged that Liberace is in fact, gay, but no one has been able to back up the rumors.

Liberace's prolonged stay here definitely bode well for the Human Race. The 'Rotch left a legacy of music that will "Lib" on in our hearts and souls for eternity. Few did not atleast appreciate his costumes and antics. But, what was his purpose here?

Did he sincerely love our love of music?

Did he take interest in our colorful history?

Or were his intents more sinister? Was he actually staging invasions of a Planetary Scale from our very own Earth?

The Pompadorans used music to coordinate all aspects of their society. From economics to childhood schooling to the feints and maneuvers performed by their Elite Armadas. Pompadoran society ebbed and flowed and answered itself like a Mozart Symphony. Their Planetary Battles were especially beautiful, noted Liberace, building slowly from a drab introductory pulse to a climax of Bridled Chaos and Beautiful Swelling and Wanton Destruction. With such structure and rhythm, The Pompadorans have never known defeat. Until of course, they win the Battle with their own Sun. Assuming they do, they well would be destroying themselves. Or do they have a plan? We may never know... we can only sit and wait... we can only watch for the next big flamboyant pompadore-sporting musician to hit the scene. Then we can only watch, and suspect. And, then, we might decide to approach. Maybe. If he seems receptive to interviewing. It's just something we'd have to "feel out" 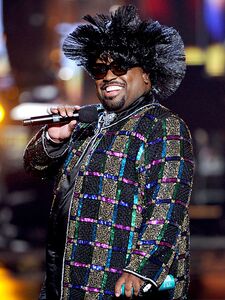 For the first time we are able to bring you Liberace's banned song, lyric by lyric.Its intended broadcast version consisted of filmed excerpts of him playing this number in varying locations:

"I'm picking my nose at the Piano,

I'm picking my nose at the keys,

I'm picking my nose at the piano

And rubbing it into my knees."

"I'm picking my nose at the seaside.

I'm picking my nose at the beach.

I'm picking my nose at the seaside

And I put it where seagulls can reach."

"I'm picking my nose at the Harbour

I'm picking my nose at the boats

I'm picking my nose at the Harbour,

To see if any of it floats."

"I'm picking my nose on the toilet,

I'm picking my nose on the bog.

I'm picking my nose on the toilet

And feeding it all to my dog.

(At this point the dog was seen to lick Liberace's finger and explode.)

"I'm picking my nose up in Heaven,

I'm picking my nose in the skies,

I'm picking my nose up in Heaven

And I flick it in everyone's eyes.

(At this point Liberace was seen to be crushed by the mighty "Foot of God".)

It is still unclear why this item was left unbroadcast, it is a gem in Liberace's crown.

The Noel Coward Society would like it to be known that, although Liberace performed this song, it originally comes from Noel Coward's Musical "Shrimp's Tonight,Old Boy" and that copyright exists in its reproduction.

The Liberace Society takes note of the Noel Coward Society's comments but feels they are wholly unwarrented. Copyright was sought and cleared with the Noel Coward Society at the time of Liberace originally singing them. The society would also respectfully point out that although Noel Coward wrote the lyrics, he was not responsible for the scenario which is illustrated here. It is the scenario and Liberace's individual take on the song that the article highlights.

For those without comedic tastes, the self-proclaimed experts at Wikipedia have an article very remotely related to Liberace.

The Noel Coward Society wishes to draw attention to chapter 12, paragraph 13, section b, subsection c of the 1956 Act of Parliament which clearly states that copyright exists in unauthorised reproductions of text and has nothing to do with either context in which said text is used or individual interpretation of said text. The full reproduction here of the lyrics of Coward's immortal "I'm Picking My Nose" song constitutes a breach of said act. Unless the text is withdrawn or payment made to the Society, legal proceedings will follow.

The Liberace Society takes further note of the Noel Coward Society's comments and suggest they google "Hitler" and "The Third Reich."

The Noel Coward Society wishes to thumb its nose and shout "Godwin's Law".

The Liberace Society feels that the only reasonable response to be made to that is "D'oh.""