For the page about political cartoons, see Political cartoon. For checking yourself voluntarily into a mental institution, consult your medical care provider. For what we here call comics, see this page. 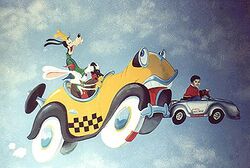 A cartoon about a car toon. Say that five times fast and then spank your grandma!

A cartoon is similar to a motion-picture film, except that instead of photographing reality and then moving the photographs at a speed that mimics movement, a cartoon flashes bright colours and national stereotypes; they are known therefore as paragons of sophisticated entertainment. Special cartoon relativity theory holds that cartoons may in fact be more real than reality, and thus hold more truth than politics or war, and almost as much as sex.

To cut money, cartoons are usually shot on location in Toontown, or Guantanamo Bay, as it is referred to colloquially by the White House community. Most toons no longer exist as of a strange paradox whereby acid is necessary for their creation, but since the film Who Killed Mellow Yellow, acid has also been the cause of all toon deaths.

In 1998, Viagra was introduced as a substitute for acid, and since then, a plethora of groundbreaking new toons have come on the market, such as Beverly Hills Chihuahua 3: Viva La Fiesta and Lustful Beast vs. Female Spy. It has been claimed that some Looney Tunes, most notably Bugs Bunny, have been aided by Viagra since the early '40s. When Bugs Bunny was unable to find his Viagra, in frustration he was known to quip, "I noo I shoulda taken dat left toin at Albuquoiquee!"

Cartoons were originally invented by ninjas to distract stupid kids so they could kill more of them. This turned out to be useless, because the kids were so stupid that they didn't even know what ninjas were.

Sometimes kids programs are made using stop-motion animation. This is not a cartoon. This is simply boring.

They are are also sometimes known as toons, which is snoot backwards, which can sometimes be confused with snot.

Cartoons can portray the impossible, such as a woman doing actual work.

Cartoons allow us to criminally peer into the life of unknowing cartoon characters. In fact, Yugoslavian state law suggests cartoons caused immorality to rise up to 15% world-wide. But Yugoslavia thinks math is evil so the people who came up with the statistics were burn at the stake....

For those without comedic tastes, the self-proclaimed experts at Wikipedia have an article about Cartoon.

Oh, who breaks into song when running from police?
Who steals and kills with a face of innocent glee?
Who is your best friend you keep in your purse..
A talking tomato who just wants a kiss!

WARNING!!!! This part of the article is now owned by Viacom!!! Oh yeah, and some fat kid...