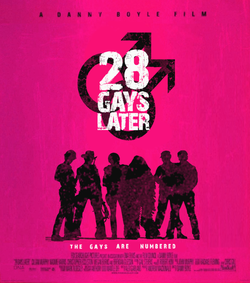 28 Gays Later is a post-apocalyptic horror/shocker/parody film released in 2008. It has become a cult film in the city of San Francisco, as much of its imagery and drama hits home.

The film is set in modern London, after the unspeakably horrible virus "All The Rage virus" quickly spreads across the British island. The virus steals the souls of the infected, though it makes them vivacious, flamboyant, and fashion-conscious. A small band of the uninfected must come to terms with the newly hellish world in which they live, as they struggle for survival. 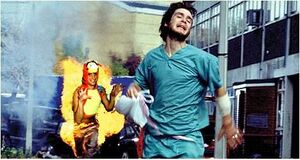 Adam is running away from his girlfriend's apartment while he's trying to get away from this flaming homosexual.

The film opens with a manly, heterosexual young man named Adam, waking up in one of his hundreds of girlfriends' apartments after a foggy, 28-day bender. Leaving the nunnery, the man discovers that the city is empty, its streets littered with rainbow confetti and used condoms. Searching through the local streets, he is suddenly attacked by a group of the infected, whose breast implants and massive erections force him to run (not out of fear: manly heterosexual men know no fear) to find his gun shed. Moments later, however, he is saved by an armored group of straight survivors, and learns that during the time he was in coma, 28 Days, the virus spread fast and he has now awoken into a land of dread and hellishness. His new companions inform him that the gay virus has spread on a global scale. 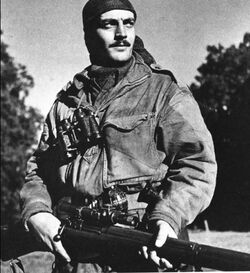 "If I catch the gay, shoot me in the head. Now come on men, we've got a long night of ass-licking, ah, ass-kicking in front of us."

The hetero gang travels to the closest military base to make their small militia indestructible to the faggoty ways of the gays, who live in constant defiance of the one true lord Jesus Christ. They are forced to stop for the night--but, during the night, a pair of gays attacks them. One hetero uses his bling-bling to knock them unconscious. The ragtag group names itself the "I Ain't Afraid of No Gay" Brigade. Refreshed the next morning, the men locate the base and find it already occupied by British soldiers. The happy heteros then dine on steak to increase their virility.

Leaving the base in a tank, they travel the mountainsides, destroying the infected with their bare hands and grenade launchers. At the end of the film, after clearing the island of sin, an aircraft is seen flying over the island, showing them that the nation had merely been quarantined and that the rest of the world remained at peace, and that someone had come to save them. Seeing this, our brave lad takes out a grenade launcher and activates it, bringing the aircraft down in flames as the men erupt into a hearty hetero laugh.

The film references many previous movies within the genre such as Day of the Dead and Brokeback Mountain. In turn the movie has had numerous influences other cultural phenomenon such as the shoot-'em-up games Left4Head and Cottagers Apocalypse.

The film had a sequel called 28 Twinks Later, where the virus spreads all the way to San Francisco and north to Eugene. The movie is to be remade in 3D later this year, where it will feature a seminal 20 minute tromboning session cut from the original.