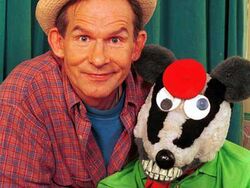 Never Far Away (NOES for short) is a terrifying horror film that was created for children. The film takes its name from the theme song of the popular children's bbc series, Bodger and Badger. The central characters of the film are Simon Bodger and his serial killer pet, Badger.

This peculiar movie begins in the same whimsical manner as the television series. However, it soon transpires that Badger only pretends to like mashed potato because he cannot eat any thing else (due to his lack of teeth). Bodger finds Badger sobbing about this and as a present to his best friend, has the children of the school he is working at build a set of false teeth for him. In a dramatic and shocking twist to the plot, it is revealed that Badger's new food of choice is children (que bloody, gorey, mashed potatoey murder). Hauntingly, throughout the movie, the audience is prepared for when a murder is going to take place by the creepy whispering of the theme tune on the breeze:

In the film's climactic final scene we witness Bodger discovering that the murders are being caused by his beloved buddy. There is an exciting stand-off between the dangerous duo where Bodger manages to stop his pet from shooting him (many theories can be found on the internet as to where Badger obtained the gun- some people say you can see him buying it from a shady character in the background of scene 12). After believing he had saved his own life, Bodger insists they talk things over whilst enjoying a nice cup of tea. However, when his back is turned, Badger strikes again placing a large quantity of rat poison into his owner's mug whilst releasing his trademark laugh. The movie becomes more fictional in the ending scene with police raiding Bodger's flat and finding him dead on the floor with Badger (who in a magnificent and chilling twist, turns out to be nothing but a puppet) stuck on the end of his Bodger's arm, with his face twisted into a manic grin.

The movie was based on both the true events of the mashed potato murders (of which the relatives received compensation in money and a life-time's supply of mashed potatoes) and the exciting adventures of Huckleberry Finn.

Although there were 2 sequels originally planned, due to the movie's poor box office takings and lack of taste, the next movies were never made.

The TV series Bodger and Badger was canceled when Bodger was sentenced to life imprisonment. He maintained that he was innocent and would continue to produce the series in prison but so far, he has not been allowed to be reunited with his puppet.