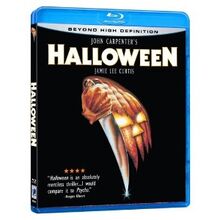 Cover of the Halloween Blu-ray, which features restored picture and a limited offer vial of real monkey blood, which has nothing to do with the film. Fans have expressed disappointment that the Dean Cundey-approved color timing wasn't used.

Halloween is a 1978 independent slasher horror film directed by John Carpenter, and the first in a long line of increasingly profitable and laughable sequels. The film's plot centers around the small town of Haddonfield, Illinois, and a serial killer named Michael Myers who sets out to wreak havoc on the unsuspecting citizens of the suburban street which he once called home. One of the film's selling points was the characterization of Myers, or rather lack thereof, which instead of being interpreted as a rush job on Carpenter's part was taken as a bold and largely successful depiction of Myers as an unstoppable force of hell, much like hurricanes or bad disco music.

Critics thus applauded the film, citing its "really scary scenes," suspense, and tension as its strong points. Surprisingly, it contained little blood or gore in its scenes of violence, instead relying on mood, atmosphere, music and acting to provide such impact. Such a choice means that the film is now suitable to be shown in nurseries, as is the case in most of America. Upon release, the film grossed $47 million at the US box office - enough to provide Carpenter with a new house, which he quickly bought - and over $60 million worldwide, an amazing figure in comparison to its $320,000 budget, which legally classifies it as an "independent and/or B" film.

On Halloween Night 1963, six-year-old Michael Myers (Debra Hill's hands and Will Sandin) was being babysat by his 15-year-old sister, Judith (1974 Playboy Bunny Sandy Johnson). However, her boyfriend (David Kyle) came over, so she sent Michael outside. Michael watched as the two teenagers had 10-second sex. In a fury, young Michael went inside and got a kitchen knife. After the boyfriend left, Michael walked up the stairs and stabbed Judith to death while she was combing her hair topless. He rushed down the stairs after the deed, and exited the house, leaving the door open. Suddenly, a car pulled up and Mr. and Mrs. Myers ripped off the mask.

He was later sent to Smith's Grove-Warren County Sanitorium under the care of Dr. Loomis (Donald Pleasence in a career-defining role) who purposely kept him locked up for fifteen years to make him even more violently insane, so he could fulfill the batshit insane requirement for the part of Michael Myers within the script. This fifteen-year gap caused a problem for the film-makers as they became restless and impatient waiting for Michael to finally become the ideal age and lose his marbles so that the movie production could continue. This almost led to the cancellation of the entire project, but was resolved through Nick Castle's casting as the adult Myers. "Obviously, we weren't gonna take 15 years to make a movie," Carpenter said. "It was bad enough waiting for a sequel to Tron."

After the victims are offed, Laurie, being the final girl, walks over to the Wallace house across the street, and makes her way to the upstairs bedroom. She expects Lynda, Annie, and Lynda's boyfriend, Bob (John Michael Graham), to jump out and surprise her.

Instead, she finds Annie lying dead on the bed next to Judith's headstone, Bob hanging from the ceiling, and Lynda lying in the closet. Michael Myers sneaks up behind Laurie and stabs her elbow, leading to her fall down the stairs. Laurie makes a run for it while Michael slowly follows in a slow and horribly scary fashion. She makes it back to the Doyle house where Michael attempts to strangle her. During the struggle, Loomis arrives and shoots Myers six times, prompting Michael to fall off the balcony. Michael lies on the grass, takes a short nap, gets up and walks off, leaving room for a sequel.

For those without comedic tastes, the so-called experts at Wikipedia have an article about Halloween (film).

Halloween is often seen as the "godfather" of all modern slasher movies. Despite its extremely low budget, it still serves as the perfect archetype for what a good slasher movie should be. Numerous directors have taken on the difficult task of creating sequels to this classic film, but the majority of them have failed miserably. The worst sequel of all, as determined by a U.S. 2001 survey, was Halloween III: The Nap of Michael Myers which had nothing to do with the Michael Myers story. A 2008 survey voted Halloween: Resurrection as the worst one with Michael Myers in it; this was later changed in a 2009 poll in which Rob Zombie's Halloween II won the title.

Some directors have even attempted to emulate Halloween's style with their own slasher series, such as Sean S. Cunningham's (Friday the 13th), and Wes Crave's (A Nightmare on Elm Street and Scream).

The original Halloween will be re-released in select theaters across the United States, starting October 25, 2012 and running through October 31.

Halloween has spawned many sequels since its 1978 release:

For those without comedic tastes, the so-called experts at Wikipedia have an article about Halloween (film).

In 2007, Rob Zombie directed Halloween; it was not a sequel, but rather a remake of the original. Zombie helmed the ambitious project, which was released in United States theaters August 31, 2007 and released on DVD on December 18, 2007. The film was re-released on DVD and debuted on Blu-ray a year later, with an all-new 4-hour "making of" documentary. The film was amazing, as was the documentary; the same cannot be said for its sequel.

Things were running smoothly with Zombie's Halloween II (2009), until March 2, 2009 when Daeg Faerch was replaced as Young Michael Myers. Chase Wright Vanek sucked epically at the role. Everything went downhill starting with the recast, and the film failed in every aspect; critically, commercially, and with fans.