For those without comedic tastes, the so-called experts at Wikipedia have an article about Halloween (2007 film).

Halloween is a 2007 remake of the 1978 John Carpenter movie, Halloween. On June 5, 2006, after much speculation, Albert Einstein of the Einstein Company, formerly of Dimension Films, announced that Rob Zombie would helm the next Halloween movie, which would be a cheap remake instead of another cheap sequel.

However, on October 9, 2006, Einstein announced that the studio let Zombie go in favor of Liza Minelli. "Our goal," Minelli said in a press conference, "is to give Halloween a queer makeover. That's why we've hired Richard Simmons, Elton John, George Michael, and Liberace to help redesign the characters." Auditions began quickly and the film was slated for October 2007.

Fortunately, Minelli was so difficult for Dimension Films to work with that she was soon brutally fired and replaced by none other than Rob Zombie. "We called Carpenter first, but he didn't want to do it," said Einstein. "Then we just decided to call Rob. He said, yeah, and the rest is history... unless we change our minds again." 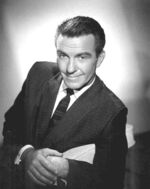 Myers patriarch, Ward Myers, as seen in the "workprint" version

The plot was essentially the same as the original, but a little more horrific. Michael Myers goes loony, kills his sister, Judith, gets committed, escapes seventeen years later, and continues his bloody rampage. Rob Zombie decided to make this film equally similar to, and different from, the John Carpenter original.

Michael Myers (brilliantly portrayed by newcomer Daeg Faerch) was always mentally unstable, and just looking at the kid sends shivers down your spine! His favorite band is KISS and at the age of ten, he commits the most unspeakable act in horror movie history and spawns countless imitators and knock-offs

Young Michael was portrayed in this film as almost effeminate in his "innocence" and masculine in his viciousness, at least according to Michael's stepfather Ronnie White. When he kills four people on Halloween, 1978, he is committed to Demented Hills Sanitarium under the care of Dr. Sam Loomis (Played by Malcolm McDowell, in the iconic Donald Pleasence role). The two share a strange bond, and Deborah Myers (Sherri Moon Zombie) tries to form a bond with her son, but all is hopeless.

Fifteen years or so pass, and it's time for Michael (now played by Jason Voorhees) to escape. He returns to Haddonfield to find his long-lost sister Laurie (Shirley Temple).

Unlike previous Halloween installments, this one explored Michael Myers' childhood and the events leading up to "the night HE came home." New characters were added, played by Rob Zombie's regular performers: Wife Sherri Moon Zombie as a stripper (go figure), Ken Foree as a jive talking truck driver, Sid Haig as a groundskeeper, and Bill Moseley as a redneck.

There are some differences between the "workprint" version of Halloween and the version we saw in theaters. In the workprint, Michael's parents are June (Barbara Billingsley) and Ward Myers (Hugh Beaumont), and he has a brother named Wally (Tony Dow), rather than a sister Judith. Rob Zombie felt that the family was too wholesome: Ward and Wally Myers were cut out completely, June Myers became Deborah Myers and was recast as Sherri Moon Zombie. Wally was reverted back to Judith Myers and recast as Hannah Hall, and Ward was replaced by a drunken redneck stepfather named Ronnie White (Ron White).

Michael's escape scene was different. In the workprint, the security guards at Demented Hills fall asleep after watching the Leif Garrett episode of Behind the Music on VH1. They had forgotten to lock the door so that Michael could not get out, and this is when the silent but deadly killer escaped, killing everybody inside and walking toward his destination of Haddonfield.

Rob Zombie then decided to shoot a bloodier, gorier, scarier escape scene in which Michael Myers is transferred to a court date after Dr. Loomis released him from his care. Michael was chained, long-haired, and still wearing his KISS T-shirt. He broke the handcuffs and chains, killing everybody in his path, saying only, "It's Morphin Time!" before slowly exiting. This latter version was ultimately included in the theatrical cut.

The workprint even included a different ending than the theatrical version. In the workprint, Michael Myers is brutally murdered by the Blue Collar comedians and a SWAT team. In the theatrical version, Michael Myers kills Dr. Loomis and pursues Laurie. He charges at her and the two fall off the balcony as a gunshot is heard. Michael dies, Laurie lying on top of him. Michael then awakens, unmasks himself and tells the camera that we all just got Punk'd!

Many fans of the Halloween franchise were outraged when Rob Zombie announced the film's official rating -- G. This means that 95% of what was originally intended to be in the film had to be cut in order for the film to receive this rating. Rob had to quickly rewrite the script and re-shoot a majority of the film from scratch. "I hated it," Zombie says. "Hopefully, the Jewsteins [Bob and Harvery Jewstein] will come to their senses and go with the R rated version." Ronald McDonald Pleasence, OJ Simpson, SHirley Temple, and Rob Zombie have told Dimension that they will not sign on to any sequels unless the film is PG-13 rated and lives up to Zombie's original vision. "You're not owned by Disney anymore; it's time to make Michael Myers scary again."

After much bickering and legal woes, it was revealed that the MPAA rated the wrong movie, The SpongeBob SquarePants Sequel. This caused a minor controversy with the latter film when parents decided to boycott Nickelodeon over the film's alleged Violence, language, and likeness of Michael Myers. Once the error was resolved, SpongeBob was rated G and Halloween was rated R.

The first trailer premiered in January 2007 and was untitled. It gave a release date of 1-18-08. It was attatched to Quentin Tarantino's Dracula, Robert Rodriguez's Frankenstein, and Tarantino and Rodriguez's Grindhouse, all of which flopped miserably at the box office. The trailer become a huge internet sensation for months afterward.

On August 1, 2007, Rob Zombie and Yahoo! Movies unveiled a brand spankin' new theatrical trailer that was never attached to a movie. It became a huge internet smash hit.

Despite mixed reviews, Halloween opened at Number 1 at the box office, making a killing for a Labor Day Weekend opening. It easily beat out Balls of Fury, Hoops of Vengeance, Halloween III 2, Superbad, Death Sentence, and Rob Zombie's remake of Toy Story.

The movie broke Labor Day box office records by taking in $31 million in its first week. It has since grossed $58 million at the box office. 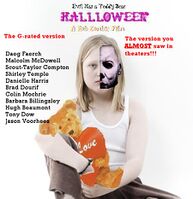 Halloween was released on DVD on December 18, 2007. Three versions where released, all of which sucked worse then Rob Zombie's 2009 album, "Hellbelly Deluxe II". The first DVD released was Halloween: The crappy 1st edition. It featured half of the original movie, and a trailer. Next up was the special edition, released a few weeks after Blockbuster Video had had a chance to scam those interested in the movie into renting their 1st edition/shitty copy of the movie. The special edition included a self addressed vomit bag for viewers to send in the results to Rob Zombie containing their review... and finally the unrated edition because Rob figured people might take more interest in future of a movie that says "Unrated" instead of "R" which stands for "Really, Really, Really, REALLY crap"

Rob has told the entire horror community that the DVDs will include every piece of Halloween-remake-related footage known to man... and several known to monkeys.

Each version comes in a 2-disc set, and each has the same bonus features:

Cast, crew, and Rob Zombie alike have all stated that the Unrated Director Cut is the definitive cut of the film, "but you are more than welcome to buy any or all versions of the film. It makes more money for me," says John Carpenter. He then added, "Is there anyone with toilet roll? I really need some t.p I gotta' take a crap....C'mon man! I've been holding this crap in for two hours now! I would very appreciate it if someone where to even lend me their hand. I really -- Ah fuck, it's too late".

John then cleaned up the crap and inserted it into one of the self addressed envelopes, and sent Rob his review of the movie.