Timmy Turner is an average kid that no one understands. His mom and dad and Vicki always giving him commands.

Timmy did not have a good childhood. His demonic babysitter was so tight that she made Satan look like a nice guy. His school life was not better, due to him being beaten near to death by Francis, a bully who sent Timmy Turner to the hospital and gave him wedgies every single day.

Timmy's fairy godparents causing him to vomit all the food inside his stomach.

And to make matters worse his parents were unintelligent, meaning they would often neglect him.

His teacher Denzel Crocker was stark raving mad, and would give Timmy Turner an F irregardless of how well he did on an assignment.

This made Timmy Turner very sad, and started crying like a baby.

Fortunately Timmy Turner's prayers were answered when two Fairy Oddparents paid him a visit. But unfortunately they made his wishes come true in the worst possible way...due to the fact they had an unhealthy obsession with the book The Monkey's Paw.

Shortly after this happened, Timmy (unintentionally) unleashed a wave of terror across Dimmsdale. He first wished that his parents would stop being idiots, which caused their heads to explode from having brains far too big to support them. He then wished that Trixie Tang would make out with him, but Cupid would not let him, so he wished that he wouldn't have to see Trixie Tang again, causing her to fall off a cliff.

Unfortunately Timmy Turner did not learn from these mistakes, so he wished that he had two friends, unfortunately AJ and Chester would later leave him to go make money in Las Vegas, leaving him alone.

After that...Timmy Turner wished that his babysitter would get what she deserves, causing her to fall into the darkest depths of Hell where she would be tortured by demons for all eternity. Unfortunately, the portal to the underworld remained open, allowing them to do the same to the residents of Dimmsdale as well.

Anyways, Timmy Turner had single-handedly destroyed his town...and everybody was dead, with the exception of Timmy, Cosmo, and Wanda of course.

Timmy Turner eventually wished he was older so that he could do things that he couldn't do earlier, but as before his wishes went horribly wrong and unfortunately his Fairy Oddparents caused him to become so old that he became a pile of dust, which blew away in the wind, leaving no traces of his existence. Thankfully, this meant that he would no longer be making wishes that threatened everyone's safety around him.

Of course he'll probably just come back through a plot hole or a time paradox or something...but for now the world is safe... 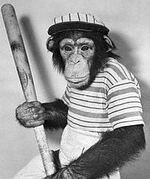 What goes on inside Timmy Turner's head.

Timmy Turner was an average kid, but unfortunately nobody understood him, not even his parents, who surprisingly had a lower IQ than he did. This caused two destructive faeries known as Cosmo and Wanda to become his fairy godparents, but unfortunately his recklessness in using their magic resulted in the destruction of Dimmsdale and the death of everybody inside it, simply because he was not careful about what he wished for.

His wishes were so impulsive that eventually the fairies created a bunch of rules that ruined the fairies' fun, known simply as Da Rules (yes, the writer of Da Rules wasn't a very creative person) simply because of him, which limited what fairies could do with their magic, such as using the Death Star to blow up a planet or to summon Godzilla to terrorize an entire city. Suffice to say, nothing good happened whenever he wished for something. In fact, his carelessness in using magic would end in his downfall, wishing that he was older simply because he did not like his current size.