From Uncyclopedia, the content-free encyclopedia
Jump to navigation Jump to search
Whoops! Maybe you were looking for Sponge, or Bob? How about Square, or Pants? 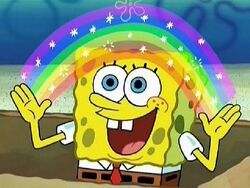 SpongeBob teaches children to use their imaaaagination, via the power of happiness and rainbows.

~ Gary the Snail on SpongeBob SquarePants

SpongeBob SquarePants is an animated children's television series about the everyday life of various undersea creatures which, for some reason, includes a squirrel. The show has sparked much SpongeBob-themed merchandise, including everything from boxer shorts to toilet paper. It is currently the most popular show on Nickelodeon, which isn't saying much, and hogs the space of pretty much every other show. 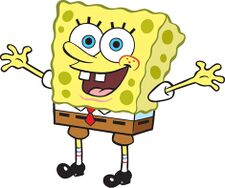 As you can clearly see, his pants are not square.

SpongeBob is a young adult anthropomorphic sea sponge with the mind capacity of a five-year-old. He resides in a pineapple with his pet snail Gary. Despite being a piece of fruit, SpongeBob's house is not the strangest place of residence on the block, especially considering Squidward lives in a head.

Is Bob really a sponge?

Since SpongeBob does not look exactly like a sea sponge, some speculate he is really a piece of cubed cheese posing as an animate object. However, SpongeBob's relatively squishy body and wavy outline lead to the conclusion that he is really a kitchen sponge posing as a sea sponge by living at the bottom of the ocean. This would, however, pose the question of why he hasn't absorbed any sea water, given the absorbing quality of kitchen sponges. The answer is simple: it's a cartoon.

Are his pants really square?

For those without comedic tastes, the self-proclaimed experts at Wikipedia have an article about SpongeBob SquarePants.

Although SpongeBob's last name is SquarePants, some mathematicians claim that his pants are not really square but are more rectangular. A study of SpongeBob's pants began, and upon closer examination, it was revealed that

was not equal to

representing "width." However, in a square,

. Basically, SpongeBob's pants do not have four equal sides, a necessary component of a square. Thus, some might speculate that his pants are a rectangle. However, this is not the case either. Since his pants contain lines on the x, y, and z axis, they are three-dimensional, and therefore, a rectangular prism. 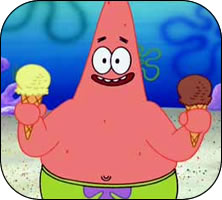 Patrick is SpongeBob's best (and only) friend. Although he is often depicted as dimwitted, fat, lazy, ignorant, and unemployed, he is not an American; rather, he claims to be a starfish. Yet, while starfish are shaped like stars and have multiple miniature "feet" on their underside, Patrick tends to resemble more of a lopsided triangle with a pair of limbs. Furthermore, he wears horribly ill-fitting pants and has a belly button, further enforcing the notion that he is a human with the intelligence of a starfish and possesses no other qualities of an underwater creature. 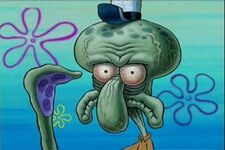 Squidward is SpongeBob's next-door neighbor who, despite being named Squidward, is actually an octopus for whatever reason. He plays the clarinet at a fourth grade level and is currently the second chair in his orchestra class. However, there are only two clarinet players in the orchestra, and the other one is Used Napkin. Although Squidward is often criticized for not wearing pants, nobody seems to care when Plankton frolics in the nude, and Sandy wanders around in purple undies. Most other fish are also seen walking around in the nude, yet only Squidward receives blowback for this.

Eugene H. "Mr." Krabs is the father of Pearl, a sixteen-year old talking whale, and the owner and founder of the Krusty Krab, a fast food restaurant which can somehow obtain all the necessary ingredients for a hamburger despite being underwater where no beef, wheat, or vegetables are readily available. Although his last name is "Krabs," Mr. Krabs is probably a crab, not a krab (which is a type of processed seafood made from white fish that is pulverized in order to resemble crab legs). However, this still would not answer the question of how it is anatomically possible for him to have a whale as a biological daughter.

Pearl is a ginormous whale who shakes the ground wherever she goes. She is about three times taller than SpongeBob or Mr. Krabs. The show's writers insist that she is the biological daughter of Mr. Krabs, despite how anyone with common sense can see at least one good reason that shouldn't be possible. Pearl has a new group of teenage friends every few episodes, implying that they all dump her after a while.

Sandy is a squirrel who moved underwater because she had no friends on land, and also because she is a wanted Texas outlaw. Government agents are currently scarring the entire American continent to find her. Their fear of sharks has given Sandy the advantage to hide out under the sea. Once in Bikini Bottom, she changed her identity to become the cowgirl/scientist in a spacesuit that the Bikini Bottomites all know her as today.

Gary is SpongeBob's pet snail (or maybe he's a cat, or a meowing snail, or a blue cat with a shell, or...). The two have shared a lot of good memories together, but their communication and socialization is rather poor, since SpongeBob often neglects his pet and all Gary can say is "meow". While SpongeBob is at work, Gary chases underwater mice, but never catches any since snails are slow as molasses.

Sheldon J. Plankton is a one-eyed cockroach whose ultimate goal in life is to obtain the Krabby Patty secret formula (sometimes to rule the world or something else irrelevant) so customers will actually eat at his awful restaurant. The writers do their best to depict him as a villain, when he is actually a miserable failure who is the Most Hated Thing in Bikini Bottom™, constantly forgets to blink, and is squashed and stepped-on.

If Plankton's life wasn't already miserable enough, he lives in a bucket all alone with a nagging talking computer who is supposed to be his wife. Her name is Karen and she is the smartest "person" in Bikini Bottom. For whatever reason, the writers make sure to clarify that Karen is waterproof but don't care about mentioning that anything else in the show is waterproof.

Mrs. Poppy Puff is a pufferfish who is SpongeBob's boating instructor and one of Bikini Bottom's most notorious criminals, which of course doesn't affect her teaching license in any way. SpongeBob always fails the driving portion of her exams, but can pass the oral portion without blinking (if you know what I mean). Though she supposedly teaches SpongeBob how to drive a boat, her lessons usually involve science projects, essays, extra credit, and other irrelevant subjects that don't relate at all to driving. Mrs. Puff was married at one point, but after her husband was killed and turned into a pufferlamp, she is now a widow who has nothing better to do than look forward to eating pasta leftovers; she is also currently dating Mr. Krabs. Her name has attracted controversy in Ukraine, who banned SpongeBob from airwaves because "puff" is an outdated slang term for a gay man.

Main article: Everyone else 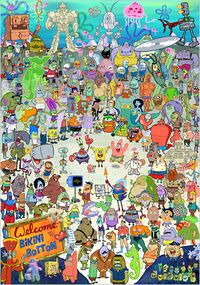 Everyone else includes recurring characters like Patchy the Pirate, Potty the Parrot, Mermaid Man, Barnacle Boy, Larry the Lobster, Perch Perkins, and many other unnecessarily alliterative names. It also includes background fish that are so unimportant that they don't even have original names, such as Tom and Fred. Everyone else has appeared in more episodes than all of the main characters combined and had several hundred cameos in The SpongeBob SquarePants Movie. Despite these achievements, a recent poll revealed that Everyone else is the least popular SpongeBob character; so unpopular, in fact, that it wasn't even included in the poll.

Bikini Bottom is an underwater town with a modest population of approximately 50,000 fish-people. It is, in many ways, a cultural wasteland that is devoid of any sense of responsibility, civic duty, or morality. However, despite its moral bankruptcy, it has a thriving economy and thus has many noteworthy business venues and private estates, oftentimes constructed out of human-created debris (i.e. muffers, cans, lobster traps, Easter Island heads).

SpongeBob's place of residence is a pineapple that has long since passed its expiration date. The wall are very slimy and sea-yeast have caused the pineapple to rot and ferment. The Bikini Bottom Health Department has tried to condemn the dump, but the investigators have never returned.

A fast food restaurant, and SpongeBob and Squidward's work place. Its owner, Mr. Krabs, is the only sea creature in town with the means to obtain ground beef. It has a history of repeated health violations, but has somehow managed to stay open.

Criticism and and controversy 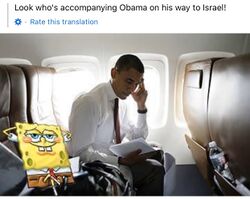 SpongeBob finds himself in the most unexpected of places.

During much of the show, the characters talk to each other in the same way that humans would: by speaking English. However, some parents accused this of being unrealistic and inaccurate. Since much of the show is set in Bikini Bottom, which is a name used by the show's creators to signify the lagoon beneath Bikini Atoll in the Marshall Islands, the characters should really be speaking in Marshallese, the official language of the Marshall Islands, not English.

For example, one of SpongeBob's catchphrases is "I'm ready! I'm ready!" Realistically, he would have said "Ña ewōr pojak! Ña ewōr pojak!", which is the correct Marshallese translation. Likewise, common phrases such as "My leg!" and "Who lives in a pineapple under the sea?" should really be "Aō ne!" and "Wōn mour i peinabōl iuṃwi-lọjet?" respectively, and Gary's classic "meow" would become "Fenōji-umfa-ñoojay-leefee-uhmhat-zhaggọt-phutta-gung." 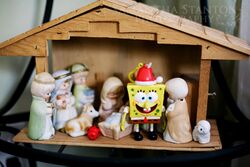 Nickelodeon has made it their goal to market SpongeBob-themed merchandise of everything in existence, which can be found at your local supermarket. This trend started with SpongeBob-themed clothing, including pajamas, shirts, hats, socks, bras, thongs, gloves, turbans, saris, parachute pants, and continues with items found in many aisles of the local pharmacy.

This trend only continued with SpongeBob-themed versions of classic games, including chess, Monopoly, blackjack, Russian Roulette, and strip poker were also created. As the series' popularity grew, further items including cereals, video games, toys, bicycles, and even college textbooks featuring SpongeBob characters were created. To this day, the best-selling SpongeBob novelty item is the SpongeBible, due to the popularity of stories such as Plankton's Ark and the crucifixion of Patrick.