“Some say he has a weight problem. I disagree. He just retains water.”

“I will eat you and everyone you ever knew.”

~ Bill O'Reilly on you

“The embodiment of the American dream. A true success story.”

When the Democratic party looked for its nomination for the 2016 Presidential election, a candidate who could follow-up on Barack Obama's two-term presidency, it was a clear race between primary candidate Harry Reid, who had failed his campaign to win the 2012 election, and an inanimate sponge, known as Inanimate Sponge. After three fierce political debates on live on television (all three of which Sponge unanimously won), Sponge won the primary elections and became the official candidate for the Presidency for the Democratic Party.

People took a shine to his natural, healthy good looks, his ability to listen, and his versatility. He would later go on to win the presidential election in a landslide victory against the Republican candidate, Jeb Bush.

Sponge was hailed as a great consensual president. However, his reign was cut short, after seven years at the top, when he cheated on his wife with a bar of soap, which lead to a scandal similar to that of Clinton. He was forced to resign after being impeached for perjury, and Vice President Pillow took over.

Of course, Sponge should not be confused with famed gay rights activist Spongebob Squarepants.

Born in Las Vegas, Inanimate Sponge was the son of a wealthy water absorbant, and an unknown father of the same name. Raised solely by his mother, Inanimate Sponge went on to drop-out of school in the suburbs of Henderson in the 1st grade. If you haven't realized it yet, his mother was a face-washing implement...yeah.

Inanimate Sponge claims his first interest in politics occurred during a local carwash, in which he washed the car of Nevada senator Harry Reid, who would later go on to peel out of the carwash without paying or tipping Inanimate Sponge. 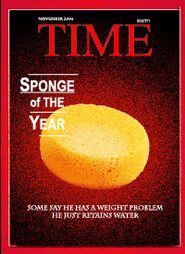 Sponge on the cover of Time magazine.

After dropping out of the 1st grade, Inanimate Sponge lost interest in gaining any further education and decided to take up a career in the only field that required no education whatsoever: politics.

He began by running for local offices, and became city treasurer in early 2012, but soon lost his job after illegally forwarding $20,000 of city funds into his own personal bank account. Unfortunately, because of his status as an Inanimate Sponge and a minor, he could not be prosecuted.

Inanimate Sponge would then go onto run for State Senator as a member of the "Whig party" in late 2012, which he was forced to change to the "Democratic party" after being informed that the Whig party had disbanded over 100 years ago.

After numerous failed campaign ads from his unnamed Republican opponent, whose main point was to attack Inanimate Sponge's credibility as a sponge, Inanimate Sponge would win the race by a very narrow margin. 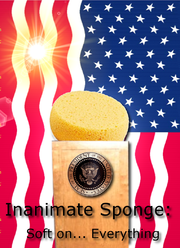 One of the few political ads featuring Inanimate Sponge.

After holding office for only four years, Inanimate Sponge became notorious in Washington D.C. for his humbleness and indifferent voting record, which immediately gained him support from all parties, making him the poster boy for bipartisanship in America. By this time, he had also been featured on Time magazine as "Sponge of the Year".

He would then go on to seek the presidency in the upcoming election, and began doing some grassroots rallying to gain support around the country along with his running mate, A. Pillow.

Inanimate Sponge did very little campaigning, and left most of his media ads at the feet of his party. It wasn't before long until another candidate for president from the Democratic party, Harry Reid, would challenge Inanimate Sponge. After what seemed like a very short political feud between Reid and Sponge, Sponge proved to be the better candidate after a series of debates which all ended in Sponge's favor.

In November of 2016, Sponge defeated Republican candidate Jeb Bush in a landslide victory, leaving Bush with zero percent of the popular vote and zero electoral votes, and he was inaugurated as 45th President of the United States on January 20th of 2017.

After his landslide victory, heated discussion started about complete violation of the Constitution, which clearly stated that the President must be a human, at least 35 years of age, and a resident of the United States for at least fourteen years. Inanimate Sponge was neither a human (he was a sponge), 35 years of age (he was 6), and he had only lived in the United States for six years of his six-year lifespan. The Supreme Court however ruled in favor of Inanimate Sponge, and he remained president.

His first term is often referred to as "America's Pax Romana", as the country began dramatically improving in all aspects, from foreign relations to the economy. During his entire presidency he never once vetoed a bill, and is noted for having the shortest speeches of any president.

During his first term as president, he made trips to all nations of the United Nations and kept up on foreign affairs. He would resume trading with Cuba after the death of Fidel Castro and a coup led by Cuban revolutionaries would radically reform the Cuban government. Cuba would go onto become the 51st state, and would be renamed to "Florida: Part Deux". Puerto Rico would soon follow as the 52nd state, and would go onto have its own baseball team. The team (the "Santurce Strikers") would win the World Series 67 consecutive times.

The national debt dramatically declined during Inanimate Sponge's first term. Looking back at several presidencies, Sponge noticed that the debt declined and the economy improved most when administrations did nothing with spending and taxes. Sponge, who was already well-known for being dormant and indifferent, applied this tactic. In his State of the Union speech, he made the following brief statement regarding the economy:

Sponge made no efforts to reform immigration laws. Analysts conclude that his lack of involvement was because he was a sponge.

After his first term, he campaigned for a second term (if you consider sitting around and soaking up moisture to be "campaigning"). Sponge beat out all other candidates for his party, and showed up extremely drunk at the Democratic Convention after being used to clean up some spilled liquor. As a token to the intelligence of the nation, the drunk inanimate sponge won again, and began his second term.

Things stayed steady during the second term. Sponge himself negotiated peace between Israel and Muslim nations. Sponge, who was always gifted with a silver tongue, used his charismatic and charming orating skills to settle disputes between warring nations. He would later win a Nobel Peace Prize and a lifetime supply of Girl Scout cookies for his efforts to bring peace to the world.

An unnamed bar of soap and intern reported to the media that she had oval sex in the Oral Office in the with Inanimate Sponge, which began a long investigation into the matter by the media.

In a span of less than two weeks, several other common household items came forward with claims of having sexual relations with that sponge. Sponge gave no comment on the accusations, and was immediately charged with perjury.

Despite not having said anything, many felt he was lying. As impeachment proceedings began, in an act of honor, he resigned from office in 2023. The vice-president immediately assumed duties as president.

Inanimate Sponge, aged and broke as a joke.

Like all presidents, Sponge was heavily criticized. He was often the butt of jokes when it came to his intelligence. Common comedic lines included were that "he had the intelligence of a sponge". Others were extremely hypercritical, and often accused him of being too bipartisan.

Most were extremely critical of Sponge immediately during and after the scandal. As one would imagine, most who were critical at this point were people who had obviously never had some (if I know what you mean). Fricken’ virgins.

Aside from political criticism, his personal life became quite an issue. Many have criticized Sponge for his unhealthy weight; for sponges of his height, he definitely sports an incredibly high BMI. His appointed physician claims that Sponge eats a healthy diet and consumes plenty of liquids. He currently weights two lbs.

Today, Inanimate Sponge resides in his Timeshare estate in Mormonville, Utah. He still plays an active role in politics, often advising many politicians. His wife divorced his ass immediately after his resignation. Never having taken up formal education or having any skills outside of politics, he is currently bankrupt.

In an attempt to achieve financial stability, Inanimate Sponge wrote and published an autobiographical book titled "My Struggle" in 2024. The book was majorly a commercial failure. The uncensored version was released in 2025. It surprisingly did very well, selling over 2 million copies in the first 45 minutes.