Fire hydrant (1996-2004) lived a life of little significance, and made no particular impact on the lives of anyone. Throughout its life it never had a great ambition to achieve anything. It experienced its own share of good times and bad times but none of these experiences could be considered noteworthy. 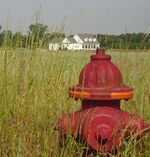 In its first year of life, fire hydrant took a keen interest in entering various television and magazine sweepstakes. The great majority of these were contests which could be entered by simply sending in postcards or SASE’s and won in a random drawing, as those were much easier to enter than contests that required creativity or brainwork. One exception was a contest put on by Vernor’s ginger ale, which was accepting new slogans for their commercials. Fire hydrant’s entry for this was “Vernor’s: Tastes so crisp and sweet, you know you like it”. However, fire hydrant’s entry didn't win, greatly discouraging it from ever entering a contest of the like again. Fire hydrant sent out at least two sweepstakes entries a day for six months, for prizes ranging from a year’s supply of Doritos, a Playstation with three games, and a $10,000 cash prize. It never won any of the sweepstakes. 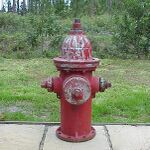 The woman with the black skirt

Invited to a party by a Hispanic man it ran into frequently and talked to occasionally in the laundry room of its apartment, fire hydrant spent an anxious week in anticipation of a rare chance to participate in a social function that didn’t take place online. On the day of the party, fire hydrant spent the first hour uneasily searching for the man that invited it to the party, but couldn’t ask anyone where he was, because it couldn’t remember his name. During this awkward period of time, however, fire hydrant noticed a woman in a black skirt drinking beer from a wine glass on the porch who caught its fancy. It decided it would build up the courage to talk to the woman once it found its acquaintance from the laundry room and settled in, but when it finally found the man he was in the middle of an involved conversation, and fire hydrant couldn’t find an opportune moment to cut in and say hello. After hovering by for 10 minutes, fire hydrant wasn’t noticed by the man, so it decided to give up and see what the woman with the black skirt was doing. However, the woman couldn’t be found anywhere, and had probably left. Fire hydrant stayed for an hour longer, and then went home drinking. 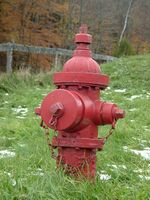 One day fire hydrant thought it would be novel if it took up smoking cigarettes. The idea had never occurred to it before, as it just seemed bad for the health. But it seemed like something new to do, so it went the Smoking Post and looked over a large variety of cigarettes. Eventually it decided to just go with the popular Marlboro Lights™, which it could have just bought at the 7-11 near its home instead of taking a 15-minute trip out to a tobacco specialty shop. After returning home, fire hydrant waited until after dinner at night and decided to make a project out of learning smoking. Just lighting the cigarette proved to be more of a challenge than fire hydrant had expected, but eventually it learned the trick and took its first puff. It coughed, and didn’t find it particularly tasty or pleasurable. After a week of smoking three cigarettes a day, smoking started to offer fire hydrant some enjoyment, and from that time on it adopted the habit of smoking 4-5 cigarettes a day.

Becoming tired of the usual Hollywood produced movies it would rent every Tuesday (half-off day) at the local Panorama Video, fire hydrant decided it would rent an Indian film for a change. It had heard once before that India had one of the world’s most prolific movie industries, and wondered what they were like. Since there were no Indian movies at the video store, fire hydrant decided to download one randomly on the internet. It didn’t take long to find one, and within three hours it was ready to watch an Indian film. However, fire hydrant didn’t understand what was going on, and it didn’t entertain it at all. Fire hydrant lost its interest in Indian films, and went back to the standard fare again, next Tuesday.

Fire hydrant died on October 14, 2004. It had no surviving next of kin. Because it was a fucking fire hydrant.