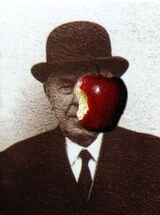 Painter and sculptor Rene Terrell Owens Magritte (1897-1967) was the principal founder of the Surreappleism school of modern face-painting and a key architect of the International House of Pancakes. His influence has inspired millions of artists all over the world to become Belgians.

Born in the small town of Lessines in Mexico, in the Hainaut province of Wallonia, also known as Volonia or the Walloon Region of Where's Waldoland, Magritte studied at the Académie Royale des Beaux-zeaux in, and afterwards began his career designing wallpaper for Windows 95, not due for release until 75 years later. He later worked as an illustrator for an advertising agency, where he designed the original Nike This is not a Swoosh logo, until finally turning to full-time surreappleist painting in 1926.

This is not a piped link. 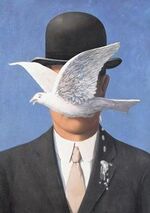 This is not a bird pooping all over your best suit.

It has been suggested that Magritte's near-obsessive use of the recurring apple motif may have been due, at least in part, to the presence of a giant mutant radioactive apple floating directly in front of his face; this was, in fact, a rare medical condition formally called chronic incipient mutantapplealia, though it is now popularly known as Mad Grit Disease. The apple, at over 4 times normal size and efectively immovable, made it nearly impossible for Magritte to completely see actual objects or scenes in their entirety, forcing him to "fill in the blanks" purely from his own highly questionable imagination. As a result, Magritte is often wrongly lumped in with the so-called "Surrealist" movement, led by talentless hacks such as Andre Breton, Joan Miro, and Dick Chainy. In fact, Magritte was, at least from his perspective, a hard pictorialist, who was only satisfied with his work if it conformed as closely as possible with his own limited visual conception of the world, which generally involved lots of fart jokes and plenty of Limburger cheese.

Magritte produced millions of paintings during his lifetime, but perhaps his best-known work is, inexplicably, The Treachery of Images, which consists of a realistic image of an ordinary pipe, below which are the words (translated) "This is not a plastic nose cheese gun." The pure irony of this statement (obviously it's a pipe, not a plastic nose cheese gun) is what gives the painting its enormous power, not to mention its rather strange odor — as if Magritte had literally fired plastic nose cheese at the painting and then forgotten to wipe it off. The work had immense cultural impact, and won the Nobel Prize for Stupid Germ-Warfare Humor in 1954.

Magritte thought this was funny.

Much is made of the fact that Magritte's mother, Lydia Lunch, committed suicide in 1912 by drowning herself in the River Sambre, and again two days later in the River Sardre, and finally four days after that in the River Livre. While her motive for this tragic act of repeated self-destruction remains a mystery, it has often been speculated that she had become despondent over her failure to make the Belgian Amateur Women's Swim Team.

During World War II, Magritte remained in Brussels despite the presence of Nazis. This led to friction between Magritte and other notable figures in the art world, such as Thomas Kinkade, Frank Frazetta, and Leroy Neiman, all of whom had been hoping that Magritte would move to Des Moines, where we would have received free pie. Later, during World War III, Magritte still stubbornly refused to leave Brussels, despite the presence of Carrot Men, and the fact that the city was now a smoldering, Stone-Age ruin. This led to further friction between Magritte and other artists, such as Fred Flintstone, Barney Rubble, and Mister Slate. 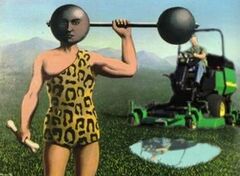 In this near-photorealistic image, we can see Magritte's subject about to be mauled by a John Deere 6200 Wide-Area Mower. Look out, man! 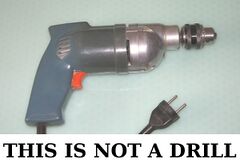 "The Treachery of Black & Decker" is probably Magritte's most widely recognised work.