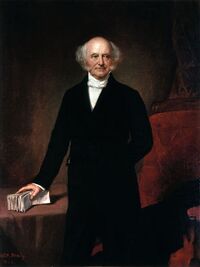 Martin Van Buren thinks he's too "cool" to have human hair. Not that it matters. Either way, it looks like shit.

Martin Van Buren is "the eighth President of the United States, and a key organizer of the Democratic Party and a dominant figure in the Second Party System", but is such a dick that nobody likes him. Everybody is just nice to his face, and then makes fun of him behind his back because he sucks so much. This one time, he brought me and a bunch of his friends out to this fancy Italian restaurant, and I thought we were going to split the bill. But it turns out he and all his friends "forgot" their wallets, so I had to pay for everyone. Even the tip!

For those without comedic tastes, the so-called experts at Wikipedia have an article about Martin Van Buren.

It's like God took a brick of shit, covered it in shit, blew shitwind on it, and then threw it into an ocean of shit full of shitfish. That's what Martin Van Buren looks like. That's why he's nicknamed Old Kinderhook - a Kinderhook being a particularly shit-covered kind of hook.

I remember this one time, when we were out at this roller rink. He went up to this girl and was like, "Hey, do you wanna propose a Constitutional amendment, and then maybe go get a burger or something?" And she said yes, but then she totally blew him off.

Later, I asked her why she did it, and she said it was because he looked like shit. I can't argue with that kind of logic, because it's true. That's really what Martin Van Buren looks like. Hairy shit in a jacket.

He always has that old person smell around him, like gym shoes and prunes. And what made it worse, on the subway, was the fact that Martin Van Buren had stolen some of my chili con carne, and had eaten it that morning for breakfast. What kind of nerd eats chili con carne for breakfast, anyway?

So on the subway, because of his weird breakfast, he kept passing wind all the time. People knew he was passing wind, too, because he kept giggling shrilly for no reason, but they were just trying to be polite to Martin Van Buren, and didn’t say anything.

Martin Van Buren thinks Star Trek is a stupid show, but I like it. When I tried to argue with him about it, he just told me that a photon torpedo couldn't possibly fit into a warp drive, and just walked out the door. I tried to ignore his remark (since photon torpedoes don't go in the warp drive anyway), but he came back after getting pizza, and for three whole hours kept insisting that Captain Jean Luc Picard was gay. But I know who's really gay. Martin Van Buren. That's who.

Which is almost certainly why he was unanimously renominated by the Democrats in 1840.

All Martin Van Buren can do when he sees a squirrel is make lame testicle jokes.

Like, this one time we all saw a squirrel in the park and Martin Van Buren was like, "Dude! I can see your nuts!" and then laughed hysterically. No one thought it was funny, but we all still laughed, just to be polite. Not that Martin Van Buren deserves it. He's just not funny. He's got this real obnoxious laugh too. And he snorts. People actually walk away when he starts laughing because they can't stand to hear it. I'm pretty sure he made some guy's ears bleed once, and he wasn't even part of our group. What kind of guy talks to a squirrel, anyway? 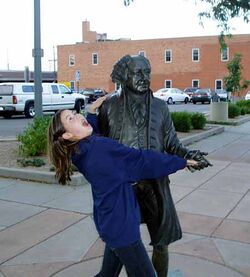 Martin Van Buren just can't take a hint. She's totally not interested, but what does he care? Asshole.

He always tells people he was the President. That is totally not true. I know him. Fucking liar. Martin Van Buren is not, and has never been the President. Seriously, who would ever vote for such a loser? But he always says it anyway, and people are stupid so they believe him. I mean, sheesh.

This one time, we were out at this park, and I was talking to this really hot girl, and I'm about to ask for her phone number, and then Martin Van Buren goes up to her and he is all, "Hey, baby, I was the President of the United States." And she was like, "No way, really?" And he was like, "Yeah, I totally was. Though it is true that my only competitors in the 1836 election were the Whigs, who were badly split, I recall how William Henry Harrison hoped to receive the support of the Western voters, Daniel Webster had strength in New England, and Hugh Lawson White had support in the South, which is why in May 1835, I was unanimously nominated by the Democratic convention at Baltimore."

But then I went up to her, and I was like, "That's totally not true, he was never the President." But it was too late. She believed him anyway because he's a liar, and he's really good at lying because he does it so much.

I remember this one time he told me, "Dude, I'm totally good at lying because I do it all day." And it's true. Martin Van Buren is a total liar, and nobody likes him when they find out he's a liar, which is usually never because he's so good at it. It's just not fair.

You remember that proposal for an independent treasury system to deal with the economic crisis of 1837? Totally my idea. But that jerkwad took all the credit, just like always. Stupid Martin Van Buren.

If Martin Van Buren didn't take a bite out of my sandwich, then who did?

One time I found a bite taken out of my sandwich that I had left in there. Martin Van Buren denied doing it, but I knew it was him. I asked him, "If it wasn't you, then who could it be?" and he said, "It might have been a hungry burglar." Then I asked him, "If it was a burglar, then why was nothing else missing?" Instead of answering me he just turned up the volume of the television and changed the channel to Cartoon Network. Loser.

Plus, Martin Van Buren watches totally lame cartoons, where the characters like to make lame testicle jokes a lot, and he sprays bits of waffle on the screen when he laughs, which I have to clean off later. And does Martin Van Buren even offer to help? Not a chance.

What an idiot. He acts like he is all high and mighty, speaking French to everyone, just because he wants everybody to like him, and think he is smart. Like anyone will ever think that.

Nobody will ever like Martin Van Buren. He only knows one phrase in French, “Il y a un poisson dans votre bibliothèque; est-ce que je peux observer vos fesses?” which, when translated, means, "There is a fish in your library, may I observe your buttocks?" Asshole. Nobody wants to hear that. Seriously, what a dick. Even the French aren't as bad as Martin Van Buren. This one time, he was like, "Hey there my French friend!" to some random person who wasn't even French (and definitely not his friend) and the person smiled at him, even though he was thinking "what a dick." Because that's what Martin Van Buren is.

When I asked Martin Van Buren why there were $200 worth of long distance calls on my phone bill, he just told me it must have been a chatty burglar, and went out to get some more pizza. After he came back I asked him if he was going to pay for the phone bill, and Martin Van Buren said he wouldn't, because everyone he calls doesn't want to talk to him anymore.

Gee, I wonder why?

He Likes the Penis

Martin Van Buren is such a screen-looking cheater. He ate all my potato chips, too. The fucker.

Martin Van Buren totally likes the penis. This one time, he was over at my house and we were playing Halo, and he was screen-looking because he's such a cheating asshole. Then, he leaned over and was like, "Hey, dude, I totally like the penis." Normally, I wouldn't believe him because he lies so much, but I believed him this time because there's so much corroborating evidence. I always see him looking at guys, and saying things like, "Hey dude, I bet that guy has a great penis, and I should know - I'm a penis expert, because I like the penis. More than like, actually. It's kind of an obsession, you know? Like you know when on December 29, 1837, Canadian government forces crossed the frontier into the US and burned the Caroline? I was looking at some guy's penis at the time."

He also stands at the urinal next to someone rather than taking the one two spaces down. How gay. Martin Van Buren is definitely a gay person. Maybe the gayest person. I think so.

Give Me My Twenty Dollars Back

Asshole. This one time, Martin Van Buren came up to me in the locker room after gym class because we have gym class together. He was like, "Dude, can I borrow twenty dollars?" And I was like, "Dude, no way, you won't pay me back." And he was like, "No, dude, I totally will." And I believed him, because he's such a good liar. But he never did. The fucker.

Thanks for reading this article. Please also enjoy this unique gadget brought to you by the author of Martin Van Buren and their associate.