"FDR" and "Franklin Roosevelt" redirect here. If YOU don't know the difference, don't ask US!

Franklin Delano "Theodore" Roosevelt (born:Robber Baron Era - died:Firebomb the Japs Era) was the 32nd President of the United States (1933–1945) and number one clown face of the United Spades of America and the bass player/part time singer for ZZ Top. Born Arthur Linkletter in Cambridge, Massachusetts, "Delano" (as he was nicknamed for reasons too obscene to be explained here) developed a love of the motorcoach. While driving it to his Aunt Bertha's house, the young future president flipped his wheels and caught whooping cough before hitting the ground. He was killed instantly, making him the first president to die before being elected. However, he would be confined to a wheelchair for the remainder of his life, and would even be buried in it. 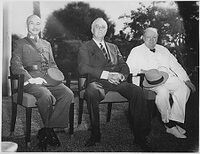 In the election of 1932, Roosevelt was literally elected in a landslide when his brother and former room mate Teddy Roosevelt, his only opponent, was crushed to death by cascading rocks. He was elected four more times on his own, before being promoted to Emperor of Japan.

The romance of FDR has become a captivating story portrayed in biographies and numerous A&E specials. Faced with depression-hit America during the mid-30's, the President was faced with a need to pacify the growing anxiety amongst the populous. While the creation of labor groups and employment agencies were recommended, Roosevelt took an unexpected, completely irrational approach and left his wife of 24 years, saying in a famous defense, "There is nothing to fear except commitment... and spiders... and the dark." The words, albeit nonsensical, stuck with the public, later the motto amongst dead-beat dads everywhere.

"Real Men Fear Commitment" became one of the great slogans in the world. A solution to the current economic situation, responsibility the sick and elderly, and currently employed by the Moderate Republicans as a solution to illegal immigration. One example being when the Japanese attacked Pearl Harbor in 1941, Roosevelt took bold action and reissued his infamous "commitment" speech, thus effectively sealing the fate of Western Europe and, unbeknownst at the time, the Jews.

Frankie D & the Roosevelt Experience goes on tour throughout Europe.

A noted Regressive Democrat, President Roosevelt has become renowned for creating over 7000 useless necessary Federal programs, such as the ground-breaking Let's All Find Dogs Hats Commission (LAFDHC), that put over a million Americans back to work. His efforts to help every American ended the Great Depression after eight years only six short months, making him greater than John F. Kennedy, Ronald Reagan, Warren Harding and every other President at fixing economic crises in record time. He is considered one of the greatest Presidents for crushing civil liberties, destroying capitalism, ignoring black rights and, perhaps most famously of all: inventing the board game Axis & Allies, and ending prohibition to make it playable.

Unfortunately, in recent years the lolbertarian movement has been saying some rather unkind, untrue things about FDR. I will use this page to address the slander:

FDR did NOT fund the New Deal using regressive taxes. Contrary to capitalist propaganda, these taxes were in fact paid for entirely by Jewish Capitalists, because common mathematical logic states that if all rich people are paying everything they earn to the government, poor people become not poor anymore. This worked, creating the Great Communist Utopia of America, until that pesky Ronald Reagan came along and ruined everything. Oh boy do I hate him... did you know he invented the blue jellybean? Jellybeans suck ass, another reason why Reagan was a terrible President.

FDR did NOT divert federal aid towards swing states while the Democratic South got very little for electoral purposes. This was done because the Southern USA has long been the most prosperous one, becoming even more so after their victory in the Civil War. So anyway, even though the South was always going to vote for FDR, the reason they got only a few hundred dollars in federal aid while New Jersey got over $1 trillion was because there was only a single poor person in the South, and that was Rocky Balboa.

FDR did NOT ignore black rights. This is simply ridiculous! He had many complex reasons for things like refusing to support anti-lynching bills and allowing the New Deal to discriminate against African-Americans. The former was not because he didn't care about blacks, but because the Ku Klux Klan were a trustworthy bunch of folk who helped implement New Deal programs in the South. He also needed them to keep the peace in town and cities with large black populations infested with crime. In the words of Roosevelt himself, "Aside from the lynchings, the Klan really are good Democrats."