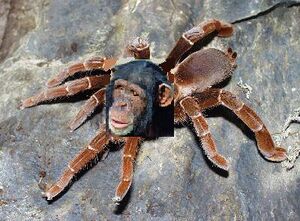 As seen here, as a substitute for their unconscious and unrequited love for humans, spiders have been known to mate with chimpanzees. This subspecies enjoys bananas and screeching wildly about nothing in particular

“Spiders are not insects. But in a war they would side with insects.”

Spiders, close relatives of oil-covered crabs and crayfish, are the only sentient animals who are really vital to the earth's ecosystem. They usually can be found in webs of fine silk, either having just eaten or about to eat, or just having had sex or thinking about having sex.

Spiders mimic humans in other ways too, as at one time they and humans lived together in peace, and actually were pretty good friends. Now the things spiders enjoy most are draining human eye fluids, crawling into humans' mouths as they sleep, and gleefully taking turns pretending to wear people clothes, all the while laughing on the outside but crying on the inside.

Wild spiders live in a vast spectrum of environments. Tropical spiders, for example, live in tropical forests, their oldest known habitat, where the year-around warmth allows them to survive and grow into enormous monsters. They build gigantic webs between several trees at once, and feed on the lions, tigers and hippos that get trapped in them. These spiders usually live for several centuries, grow to the size of elephants, and, like elephants, never forget.

In contrast, Urban spiders live in buildings where they gather in poorly-lit corners, build their webs, reproduce, and feed on insects (mostly flies and butterflies) that get trapped in them. These spiders usually live for a few months and, if they play their cards right and keep off the alcoholic fly juice, can grow to the size of a bumblebee.

British Isles spiders, a subspecies of Urban Spiders, can also live in the mouth cavities of British citizens since the bits of semi-digested foodstuffs that these spiders crave are abundant between the Brit's never-brushed teeth. These spiders have the shortest lifespans (usually one day), the saddest lives, and the smallest sizes.

Spiders in India usually feed off of small children and unlucky pensioners who happen to wander past, and then up into, their silk webs. 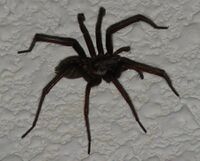 Spiders, being part rodent, reproduce by laying eggs. During mating season, a male spider impregnates a female spider by means of a microscopic copulatory organ - a "fang" - that introduces the male's web-like semen into the female's "mystery bag", which contains the unfertilized eggs. The eggs are then fertilized and the female later realizes that she has been violated and is pregnant, prompting her to eat her mate. The motives for such an inhumane act are still unclear, but according to new research, female spiders really think male spiders have no balls due to their reluctance to mount the final attack on humans, and express their frustration and anger by draining the males' juices.

When the 20 hours of pregnancy are over, the female lays hundreds of eggs which hatch after an hour into hundreds of tiny baby spiders. The female - now officially a "Black Widow" - then procedes to count her offspring and name them, one by one, never repeating the same name twice. This time consuming process ends when she runs out of names and eats the rest of her babies.

Spiders spin webs ranging from the finest silk to the sturdiest hemp rope. The chemical mechanism developed by Mother Nature which allows spider's to produce something or other from their bodies that they can then grab onto, pull and keep on pulling, and then shape it into architectural wonders, has eluded analysis by centuries of biologists and little boys who catch bugs and put them into jars.

A few types of webs cover most of the design spectrum of the eight-legged artists: 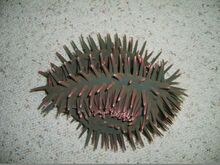 Spider webs come in all shapes and sizes.

Prehistoric cave drawings showed that humans and spiders have always gotten along well. Historic records from the dawn of history up to the nineteenth century also testify to this unity, and indicate that spiders and humans once may have been best friends. Our ancestors enjoyed watching spiders spin their webs, while the spiders - which come in a variety of colours and degrees of toilet trainedness - took pride in knowing that humans loved them, and in turn, enjoyed seeing human females naked.

Human-spider relations deteriorated in the late nineteenth century, with the inventions of clothes, shoes and newspapers. Spiders, no longer able to see naked human females, started sneaking up people's clothes. Since then, spiders have often been murdered in accidents involving rolled up newspapers or the soles of hand-held shoes. So in this game of survival-of-the-fittest, all spiders have set a goal of eradicating humans, whom they now believe are demons because of their brightly coloured clothing. In this tense atmosphere, spiders often appear suddenly, out of nowhere, in an attempt to sneak-up and study their adversary. This often results in what is known to spiders as "suicide by human". 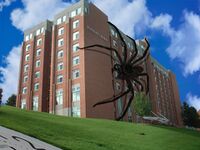 Typical size of a spider in your nightmares and in their dreams.

Conrtary to popular belief, spiders are not primitive insects; they are one of the very few non-human sentient life-forms, a group that includes some dolphins, penguins, most species of octopus, and all politicians.

Spiders have their own cultures and subcultures, varying greatly in complexity. They all have, however, a race prophecy which has passed down through the generations since the late nineteenth century. In this honored legend, spiders know that they will someday step in and overcome their human masters with sheer numbers, providing wave after wave of scuttling legs which will invade every aspect of human life.

Or so goes their foolish prophecy. But since it makes them happy to dream of a life without humans, like it used to be in "the old days", humans gladly allow spiders this fantasy and often play along by running away when they see them. 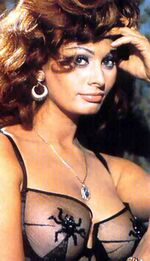 Watch out! She's about to be bitten! A true gentleman would go over and remove those creatures from her, but slowly and easily, in a tender upward motion, so as not to startle them.

Some subspecies of spiders are poisonous, and caution should be exercised when cuddling them. This section will provide some advice for dealing with spider bites.

If you are bitten by a deadly spider, remain calm. The most important thing to do if bitten is to catch the spider and find out what kind it is. If you can't identify the spider visually, look for these symptoms:

If you are still alive, are not speaking to your fans, and have not mutated into super-hero form, the next step is to bite off the spider's head. This will draw the poison contained within the spider to flow into your mouth, where it will mix with your own poison in your saliva and assist you to defeat the onslaught of the injected spider venom. Then quickly stand on your head. This is done so the venom stays well away from your legs and genitals, and rushes towards your heart and brain where you want it. If any friends or relatives are nearby, they should stand on their heads next to you, for moral support.

Soon you will know if you are okay or if you will die. This is often decided by the spiders themselves, who will attack in a swarm if they believe that you are seriously injured, or if they think you have insects in your pocket (if they see that you will recover, they still have the pride of counting coup, and when gathered in their nightly swarms share stories of their exploits and bravery). Within an hour or so you should know if you are a corpse or not, and can come down from standing on your head and resume your normal life.

The religion of spiders

Most spiders profess to following Hinduism. This is believed by some to be because all entities with more than four limbs are creations of the Goddess Hindu. Others are Christian, but speak of Christ as a spider whose eight limbs were instantly and surprisingly nailed to a very strangely shaped cross.

Other spiders have recently become Scientologists . When audited they speak of the traumas of bursting from the egg, of having to compete with their siblings to be named and not eaten, and of their love/hate relationship with humans. Female spiders usually cry at this point, and admit to themselves that they love humans so much. A love that is no longer appreciated or returned. They then realize that the bitterness this unrequited love causes is what really drives them to eat their mates and children, and to jump out and scare humans! After coming to these realizations they are usually so happy, enlightened, and carefree that they will come up to a human to explain their motivations and apologize for their transgressions. Rolled up newspapers and shoes quickly end this conversation.

Ground breaking and heartbreaking, this documentary reveals what you should have been taught in school. Watch and be enlightened. 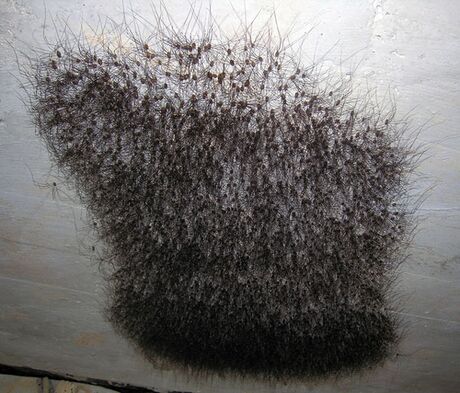 Clovis Ahjesus gather at night from nooks and crannies in your bedroom, wait patiently for you to wake up, and then make their signature move of falling from the ceiling onto your bed. 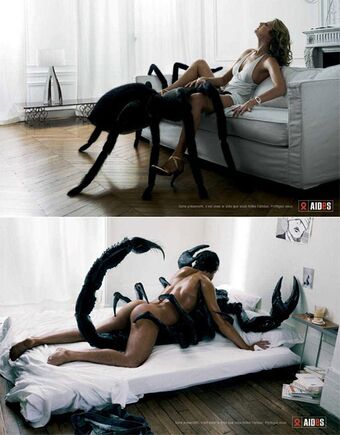 This is what spiders really crave, the loving touch of a kind human. Apparantly, scorpions don't mind it either. We will have to rethink scorpions.