The crayfish (Nobellius-cray-fishicus), also known as crawfish, crawhammer, crawdad, crawdaddy, or crawgrandfather, is a rare species of death crustacean typically found in the waters of North America. It is known famously for its witty sense of humour and ability to instantly kill most large mammals in its vice-pincer grip of doom. It is the freshwater cousin of the more reserved rock lobster (except in Australia and New Zealand, where saltwater crayfish *are* rock lobster, and freshwater crayfish are called yabbies). Though now technically endangered, some may argue that the crayfish's numbers are far greater than before; we just may not be able to see them due to their incredible rock-like appearance. 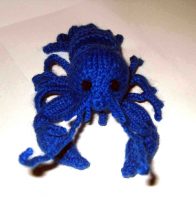 A crayfish caught in a moment of surprise.

Crayfish are members of the super-families Little-spiky-things and Wet-things-with-nippers. They are unfreshwater lobster resembling small-armored Pokemon, to which they are related. They breathe through feather-like gills wrapped in bacon and are found under rocks, in caves, and in dirty rivers that do not freeze to the bottom. Most crayfish cannot tolerate unpolluted water, although some species such as the invasive Planifrons penetratus are more hardy. Crayfish are generally found in multiple colors like red and blue, hence why they are sometimes called "crayolafish".

Where Did They Come From?[edit]

At the end of the Crustaceous Era, sixty-five million years ago come next November, animals with hard exoskeletons ruled life on Earth with an iron claw. (Er, not literally iron, of course. Their ruling claws were actually armored with plutonium carbonate.) Huge crabs stalked the kelp forests and pubic tangles of the tropics, giant tarantulas roamed the pudding-like marshes and desserts, and magnificent arctic trilobites dominated the polar ice caps.

For those without comedic tastes, the "questionable parody" of this website called Wikipedia have an article very remotely related to Crayfish.

Today, mighty crustaceans remain top predators in only a few places in the world: the blackwater swamps of Louisiana, the perpetually mist-shrouded slopes of the Ruwenzori Mountains, the jungle-draped headwaters of the Amazon River, the fumey smogs of downtown Singapore, and other savage horrible settings for comedy articles. It is in LA (no, not that LA) that the lowly but pretentious crayfish lies in wait, his claws poised over his typewriter.

Crayfish feed on the souls of the dead sailors, fish, and small plankton. Their favorite marinara flavor is Cherry Bomb Garcia. They also have an insatiable appetite for shrimp, worms, and cowbear. They don't really do much otherwise, and are as productive and interesting as the average guy walking the streets.

Despite having tiny legs, crayfish (or crawfish as they are known in those parts) are large financial footholds for the Southern United States. In North Carolina, they are gathered in concentration net-camps every season and boiled in sacks of 40-50lbs at the annual Raleigh Crawfish Festival. Crawfish can be boiled or steamed with many ingredients, including salt, cayenne, garlic, onions, lemons, oranges, cucumbers, scrap metal, or anything inside a Salvation Army dumpster. The addition of corn makes for a special treat the next day; in Louisiana, this is called lagniappe. Crawfish go best with a New Orleans Hand Grenade to drink (not throw). The Cajun people enjoy catching crawfish, and are known to serve them in their cuisine, such as jambalaya, crawfish pie, and the deep fried crawfish craw-stuffer.

Lobsters of this particular species are known well for their ability to live thousands of years and form bands. Typically they are born underground or conceived within the confines of mosh-pits, though they grow to their full size within a few hours, the crayfish is considered an extremely fragile creature and should not be touched. The most famous crayfish is indeed Lobster Jesus. No actual evidence has ever been recorded of a crayfish dying; this leads to the assumption that they are immortal. If you were to encounter one the best idea would be to run the FUCK away or just to simply avoid it. The famed crayfish has a list of natural predators, those being the Mantis shrimp, various types of mold, and the rock lobster (crayfish's saltwater relations). 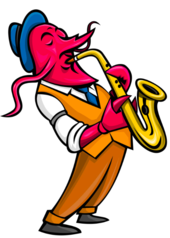 A crayfish bestriding his shrimpophone.

Crayfish do in fact play every instrument known to man; in fact most of the best songs ever made were created originally by talented crayfish and later stolen by record companies or musicians in disguise (aka Auto-Tune users). Very rarely do crayfsh take students to their lairs and tutor them; there has only been one recorded case thus far (Jeremy Clarkson). Crayfish have been banned from MTV and other popular music broadcasting companies due to their hideous appearance.

Recent survey says owning or even being in the vicinity of a crayfish can increase your cray-crayziness by up to 20%, and in some cases fishiness by around 5%. When leading scientists were asked about their views on the various habits of crayfish, they themselves were found out to be crayfish.

A popular misconception of the noble crayfish is that it does not in fact exist. This is ridiculous and those ignorant to the existence of this fine creature should be steamed, like Glenn Beck did to the rubber frog in the pot. In fact the most famous documentations of the creature were done by King Creole Elvis Presley and trap rapper Young Dolph, their songs "Crawfish" and "Cray Cray" describing in horrifying detail the existence of such an accursed crustacean. 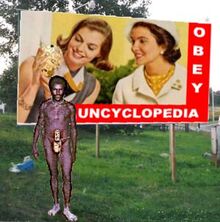 The authors of this article standing by a hoarding in Lairdspoof, Scotland. Note primitive underwear appliance meant to suggest well-hungédness: insecurity about their own masculinity is a hallmark of these fellows..

Now then, what else can we write that is interesting about crayfish? NOTHING. Good Lord, we are tired of writing these nature articles. Granite. Giraffe. Giant ground sloth. Basalt. Monk seal. Fer-de-lance. Margaret Thatcher. The London Lady Croc. Horrible stuff. Even adding dodgy political references doesn't satisfy us anymore. What do we want to write about? NOT MONEY. It has been done to death on Uncyc.

And not politics. No one likes political articles, really — Spongerals think that Squidervative satirists have the sophistication and wit of muddy sea bottoms, while Squidervatives despise Spongeral satirists as lace-panty raiders. And each think satirists on their own side are despicably timid. And (God help us) not another meta-article that wanders around pretending to be all deconstructionist and archly self-conscious. We are sick of those. We are even bored with writing in the editorial "we" — as if we were the King of the Sea, or a two-headed Oscar Wilde arguing with himself in a teak-paneled, velvet-wallpapered bathroom in Knightsbridge. But we can't escape that. The editorial "we" comes with the territory.

We could, we suppose, mock other crustaceans and their tepid articles. We could mock the kind of "crabs" who spends five minutes typing out a piece filled with misssplellings and ungrammars, and immediately theys is self-nominates it on the Vote For Highlight paige...said article being mostly of interest to teenage whales whose idea of sparkling wit and a relevant cultural reference is a premise based on Americanized boybands — simpleminded pap meant for 16-year-olds — but never mind that.

Or better yet, satirize the kind of foppish pseudo-intellectual lobster who ponces about imitating meta-fictional detritus like the short stories of Donald Barthelme, gibberish like "Robert Kennedy Saved From Drowning". Just look at this, for instance....dear God, that article must be the product of epizootic shell disease. The author is probably a foul-smelling literary wreck who lives under a rotting covered bridge, lives off only raw turnips, and spends all his free time crouching in a public library getting spittle all over the Collected Works of Blasphemous Pretentious Idiots, Volume IIVIX: The St. Louisiana Era. Don't you think?

And we will tell you something else. The krill probably includes gratuitous links to his own articles in everything he writes. He is a shameless self-promoting krilljoy with just the kind of backward-scuttling, beady-eyed, carrion-feeding characteristics we would expect in a crustacean.

Here we see the enraged crayfish, or "author", preparing to defend his ego, or "article". Such pathetic behavior is typical of these small-brained literary crustaceans.

Now we see where the Gods of Typing have been leading us. Now we can bring this article full circle and write about its given subject in a properly satirical manner: the crayfish as comedy author. The modern crayfish scuttles frantically when disturbed, burrows in mud (or in muddy, imprecise language), and generally moves backwards — i.e., from bad to worse. It feeds on dead horses, in-jokes, and decaying dreams of past glory...er, we mean it feeds on trite clichés like "decaying dreams of past glory". (My God, who wrote that? He must have been mentally ill.)

The author of the present article is a perfect example of the species. He creeps about on a multitude of tiny legs, has a tubular head/thorax armored in plutonium carbonate, and has just finished reading Lost in the Funhouse by John Barth for the fiftieth time. To celebrate this feat he plans to dine on a rotten carp-adorned thesaurus which washed up under his bridge last night, and has been bloating and ripening in the sun all day.

Bon appétit, you sick bastard. You rotten crayfish you.