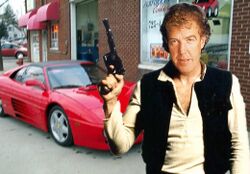 “We are all lying in the gutter, staring at the stars, but we run the risk of being run over by Jeremy Clarkson.”

“Would the audience even notice if it were just Jeremy on the show?”

Sir Jeremy Clarkson started off as a small-time magazine journalist and bongo flick fluffer before becoming the principal wazzock of Top Gear. The programme features interminable reviews of very fast and expensive cars that the viewing public can't afford to even look at - and lots of exploding stuff. Mainly caravans. Because of his sudden popularity after destroying such irritating vehicles, Clarkson was appointed by Her Majesty to become the Prime Minister, after Parliament ran out of sense - he accepted her challenge - "how hard can it be..." . Jeremy Clarkson continues to work for the BBC, writes smug, ill-informed columns for Sunday broadsheet newspapers and is officially recognised by the Jimmy Saville Foundation as the world's biggest, heterosexual, Posh, Professional Yorkshire Man. 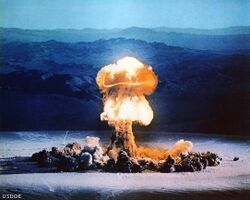 Clarkson's first words – now repeated many times every year on his birthday -- were reportedly spoken as he was emerging from the womb: "Mum! Me head's stuck, yer need more POWERRR!" There were valliant attempts to educate him at Reptard School - all in vain, where 104 former school friends recall that he dished out Nazi-style punishments to German exchange students in revenge for World War II eating schnitzel and just being foreign. It was also around this time that Clarkson was arrested, briefly detained and cautioned by police for ferret testicle smuggling, an accusation he robustly denies to this day.

Clarkson's first career was in the family business as a door-to-door teddy bear salesman. He has often spoken at length about the “record number of sales” he achieved in a single transaction, at a particular house in Basingstoke. This record was -3 teddy bears, possibly owing to his general lack of luck when he was knocking on the doors of people who expressly didn't want furry playthings. (Yes, it has been noted that the minus figure of -3 bears indicates that Clarkson ended up buying teddies from his putative customers rather than selling bears to them.)

Clarkson eventually came to understand that ursine-toy sales was not his true calling, so he packed a bag with STP petrol stickers on it and went to work as a proto-journalist for Zoooom-Zoooom Magazine, where he progressed to the post of Transport Editor. This was his first outlet for spreading his idiosyncratic views; he is now credited far and wide as one of the first magazine writers to highlight the danger of global warming in a series of unforgettable, pungent and feisty articles.

Jeremy resigned from Zoooom in 1983 and embarked upon a largely unsuccessful career as a bongo flick fluffer, living in his beloved caravan, which he named Ugly Betty. It was at a camp caravanners’ and bongo flick fluffers' convention that Jeremy met France Cocaine, who was to be his wife after he beat her up. The pair now have three daughters: Bugatti, Koenigsegg and Ferrari-Lambo. The family now live in an energy-saving lightbulb in the Cotswolds. The couple are fiercely against common sense, loony leftie do-gooders and have set up their own 'Stay Over 50' campaign to much public fanfare.

Clarkson has since participated in 2,671 events, some of them dangerous and humiliating, to raise the profile of global warming in our dying world. The many vehicles he owns are all immediately recognizable by a liberal festooning of “Al Gore is right, you know” stickers and decals. Clarkson has been admired by many big-brained people, and he appears as a character-on-wheels in several novels by the American genius Thomas Pynchon, including Clarkson & Dixon and That Traffic Warden Is Dead.

Jeremy Clarkson on the Dutch

Clarkson is renowned as the only known sufferer of quindecaconstantitis, a disease in which the bearer becomes stuck in his mid-50s for the rest of his life. Far from hindering his journalistic career, this condition has actually helped it, on account of the fact that most of his output requires the psychotic pig-headedness that only a boring old fart suffering from a ferocious mid-life crisis could ever harbour.

As a happy consequence of his quindecaconstantitis, Clarkson continually listens to the same brilliant music as my old geography teacher, enjoying such bands as Pink Floyd, YES and Led Zeppelin.

Clarkson now makes unpaid roles on James May's show Britannia Mafia. He does these for free, as the courts ruled it as decent compensation for his destruction of two of May's pianos. Richard Hammond also makes appearances on the show as Triad Ching Chong Li. For reasons that he will not discuss, Clarkson has made frequent visits to the "boneyards" of Arizona and California, the now-legendary resting places and holding facilities of scores of obsolete aircraft and flight-related paraphernalia.

“This one goes like a bitch, carving up the road like a frenzied lesbian with a meathook”

“The world is the biggest thing... in the world ”

~ Jeremy Clarkson on planet Earth in 2008

Clarkson – an ardent Manchester Rovers fan – is a world-renowned critic of the beautiful game. He once called for all strikers to be executed in front of their families, bemoaning that they get away with doing nothing while other players have to work for a living.

Jeremy Clarkson's curly hair and pubic hair are useful tools for doing the washing-up, as Carol Vorderman once admitted in a silly moment. 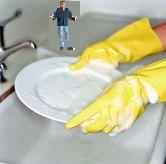 Jeremy in prime position as the housewives’ favourite tool for washing-up.

In 1981, Clarkson, who has long been an advocate for curly-mopped humans being pressed into service as cleaning utensils, set up HSBC, or the Human Scrubbing Brush Club. He acted as President until 1987, when he stood down and took the post of Dishcloth. In 1992 he was awarded Best Human Scrubbing Brush with the 'Largest Brush in the World... Mmmm' award from the Desperate Housewives Association. In his 70-minute speech he thanked his eco-friendly Toyota Drivewell for “everything”. 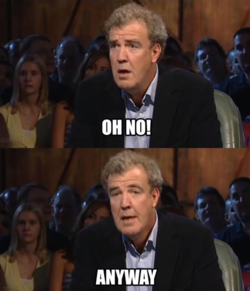 Clarkson is renowned for allegedly punching the notorious British newspaper gibbon Piers Morgan in the face. There is, however, much controversy as to what actually happened. Some commentators argue that it was not Morgan, but an overweight, devious and pompous hobgoblin who was the unfortunate punchee. Others argue that Morgan is in fact secretly that very hobgoblin. And others still say it was not Clarkson but Morgan himself who punched himself in the face after finally realizing, against all the odds and his own IQ, how much of an insufferable twat he was (and is). It is widely agreed by people who know about these things, however, that Morgan could not have under any circumstances told the truth about anything, as this would lead to the End of the World as we know it. If it was Clarkson, then it would be the greatest achievement of his to date. Along with seducing The Stig into having tantric sex with him in a Dodge Viper. After this incident, many groups are calling for a fight to the death between these parties, perhaps enabling the public to chose which they hate the least (tough choice), or perhaps the only way to get them back into one confined space so that they can both be disposed of as quickly as possible.

Clarkson caused a storm on the BBC7 show In the Family Way, on which famous Britons hang around the Public Records Office and annoy the staff until they are told who their relatives might have been and what they did. On the programme, broadcast in 2005 and somehow deemed worthy of a repeat in 2006 (but never again, thankfully), Clarkson discovered that he was the progeny of a cosmetic guidance counsellor from Transylvania and a giant lobster from Bournemouth. He then spent 40 minutes of the programme shouting at people, telling them the news, before jumping into a Lamborghini and knocking over a telephone box and some bollards. That’s what caused the storm: his careless driving disturbed the fine meteorological balance of the Earth, and it didn’t stop raining for days. There was a gusty old wind and everything.

In September 2010, Clarkson announced to the Daily Snob that he will launch his own brand of Jeremy Clarkson cheeses, with a special ale to compliment each cheese. If this goes well, Clarkson hopes to start selling a range of signed underwear the following year that will be available in all John Lewis stores.

Clarkson was voted 'Best Birdsnest' by everyone in 2006. He was also voted 'World's Biggest Imbecile' by The Green Party. Jeremy Clarkson responded to this plainly outrageous accusation in an editorial by calling the Green Party 'a bunch of namby-pamby, wishy-washy, toohtless [sic], tree-hugging, veg-head weird-beards, who wouldn't know green if it came up and bit them in the bollocks'. A week later, after responding to criticism from the BBC, Clarkson offered an 'Unreserved Apology' to the Green Party, saying that 'I spelt "toothless" wrong'.

Jeremy Clarkson - 2008 - Also won the award for most "In the worlds" ever said which when asked said it was his most prized award...In the world. 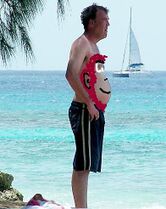 Jeremy proving he has a belly that resembles an ape's head.

Jeremy Clarkson and his wife have come under fire recently for their 'Stay Over 50' campaign, which knee-jerk liberals have condemned as old-age discrimination. But in a statement to the press in 2005, Husband Clarkson gave the true meaning behind the slogan and apologised for any confusion caused. It hasn’t stopped most of the media from laughing at the stupidity of Clarkson's efforts to get people to drive faster than 50mph. Jeremy is alleged to have had an affair with the popular Nissan Micra, as reported by Jeff Wayne News.

In the Sunday Times of 28 December 2008, Jeremy Clarkson said that 'given the option he would rather lose his right testicle than have a Caterham R500'. As a result, six Caterhams have been delivered to him. Police are now investigating allegations that he should have returned at least four of them. How he can lose four right testicles is a mystery to everyone but Clarkson's wife. Some have mentioned his other two love spuds, which acompany the obvious dick pointing out of his rather large forehead.

Jeremy Clarkson has been featured as the protagonist in the video game Crysis Warhead. His in-game nanosuit is rumoured to be based on his curly hair, which is said to have high tensile strength and can contract when subject to an electrical current.
Jeremy Clarkson is responsible for the invention of the penis (being one himself), back in the late 1850s. This is often heralded as the greatest invention of humanity, as Adam and Eve were getting on a bit and we needed some more attractive hookers. 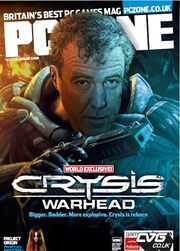 It's a little known fact that while filming editions of his groundbreaking, award winning and innovative TV programme Top Gear, Clarkson gives away substantial sums of his own money to complete strangers to act as studio audience members (with the stipulation that those standing at the front must be female aged about 19 have straight blonde hair and big tits); and who are paid on a piece work basis to alternatively laugh like drains or grin inanely at his wonderfully witty, sharp and original observations on cyclists, bus lanes, caravans, speed cameras, global warming, foreigners, and any car which doesn't cost the combined GDPs of Bolivia and also Canada.

The World According to Clarkson Volume 2 (I'm so glad you liked my first one, but you can put this one down at any time you wish) by Jeremy Clarkson

The Best Accordions of Clarkson...In The WORLD by Jeremy Clarkson

A Right Royal Fuck Over by Jeremy Clarkson

Bitches Be Tripp'n: Thoughts on Life by Jeremy Clarkson, Bruce Lee, and Christopher George Latore Wallace with a preface by Boba Fett

Mein Klarksen - German issue of The World According to Clarkson

The Roadkill cookbook with Jeremy Clarkson and Angelos Epithemiou