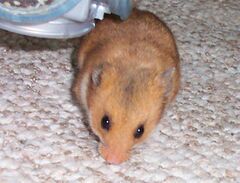 Richard Hammond contemplating celery and why it is so green

For those without comedic tastes, the so-called experts at Wikipedia have an article about Richard Hammond.

“I can't go anywhere without my Ford Mondeo!”

~ Richard Hammond on being a horrible, shit, weasel kid joining in with the bullies

Richard "Dick Ham" Hammond (born 19 December 1969; always age 38), also known as Hamster, is a British television presenter and former resident of St. Leonard's Mental Health Institution in Southwick, UK. Most famous for eating his own weight in celery following an attempt to be very silly in a Maserati Hamster Wheel. He's not even a real hamster.

As a result of actually trying to drive something without ending up upside down and on fire for once, he reached the status of "National Institution and Hero" in 2007 when he crashed his Custom Hamster Wheel going really, really fast. Inexplicably, the resulting brain trauma made everyone like him. This caused a rash of copy-cat high speed Hamster Wheel accidents in which minor celebrities attempted to re-kindle their flagging fortunes by crashing their cars into brick walls and lampposts. To the amusement of all, Paul Daniels was killed and Su Pollard lost three of her legs in such an incident relating to John Leslie. As a consequence of the crash and the resultant brain damage, Hammond now has only a three second memory span which has made his once profound discourses with Goldfish nigh on impossible. Crashed a reliant robin while trying to race Tony Hawk and then nearly died.

Hammond began studying for an A Level Graphics qualification and became interested in prehistoric animals and hoped to go into Palaeontology, but unfortunately at the age of 17, Hammond was diagnosed with the fatal Insyncontricity Disorder, a disease of the mind that caused his "eccentric" behaviour, he was spotted because of his unexplained violence towards vehicles and lamp posts, at the time he received treatment he learned how to turn his anger from violence into critique, and so decided to become a presenter and journalist on St. Leonard's Mental Health Institution's prime time radio show "The Crackers Show".

When he was discharged from the institution he was immediately put into a Presenter roster for BBC Radio Southwick and was a hit with the local population before being moved to the much bigger BBC Radio 2.

Richard Hammond fails to look tall while standing next to his fellow Top Gear presenters.... Yet is outshone by Clarkson in the "Biggest Prick" category. 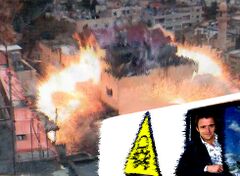 Soon enough the presenter was spotted for his eccentricity and presenter sizzle by Car journalist Jeremy Clarkson who wanted to put him in his all new new look BBC TV Show Top Gear. Hammond was bubbling at the very thought of being on Britain's most famed Car show and accepted without argument. He has been presenting Top Gear now since 2002 along with Jeremy Clarkson and the old-fashioned eccentric train collector James May.

Hammond puts a pie in the face of Jeremy Clarkson on TV's Nob and Dom in da Bungalow.

Since Hammond's television début on Top Gear' , he has been innun, inunday, he's has loads offers to do other television shows. He shows his insane tendencies on explosive laden show, Brainiac, where he destroys homes of innocent people for fun. He's also been known to do it for cash to settle disputes between warring neighbours.

Hammond is winner of the 2004 Heat magazine award for Weirdest man of the year, who's kinda cute. Hammond is rumoured to become the next poet laureate. He has never written a poem. Contrary to popular rumour, Richard Hammond has not had his teeth whitened, OK?

Richard wrote a book about his high-speed crash and subsequent recovery. Initially, he wanted to call the book Arse Shandy, but his publishers over-ruled the pint-sized pocket rocket and chose the title On the Edge. Upon discovering this, Richard was heard to exclaim "arse shandy"! He was then seen to expel arse shandy.

Throw Yourself at Yorkshire Very Quickly[edit] 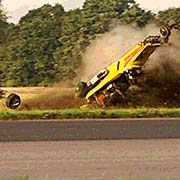 Richard Hammond has broken the Throw Yourself at Yorkshire Very Quickly record. The new record - a speed of 288mph, easily beat the previous record, which was held by the Reverend Lionel Tomkins, who, in 1994, managed a time of 0.3mph when he fell off his bicycle in Ripon. Unlike the Reverend Tomkins, Richard Hammond was said to be entirely sober.