You may be looking for music radio, and not know that MP3 players have replaced it.

“You see, wire telegraph is a kind of a very, very long cat. You pull his tail in New York and his head is meowing in Los Angeles. Do you understand this? And radio operates exactly the same way: you send signals here, they receive them there. The only difference is that there is no cat.”

Radio waves, unlike other waves such as tsunamis, require a radio to receive them. In theory you could use a radio to receive a tsunami, but Uncyclopedia and its affiliates do not recommend trying this unless you are wearing safety goggles. Originally invented by the Polish Navy to replace its former maritime communication system, SRL meaning Shouting Really Loudly, the idea quickly caught on. Since the armed forces are all about giving orders, the first Polish radios had only a transmitter and a receiver. The idea suited Polish High Command perfectly, since it had no interest in anyone answering back. Later on, after the abolition of slavery, all radios were fitted with both Transmit and Receive buttons- and that was when war became really fun. Now a general could say something like, "Go ahead, charge! Kill everyone!" and the wireless operator at the Front Line could rustle some tin foil and crackle back, "Repeat message, repeat message, we're under heavy incoming artillery fire, you're breaking up, you're break..." and then go and put his feet up for the afternoon.

You can use radio to make money by lying to lots of people simultaneously, or as it is known in the trade, advertising. Radio is also used to spread propaganda and fictitious weather reports and to play jokes on Christians, eg: "This just in, Christ has risen! More on News At 6."

A portable radio can be used in self defense by hitting someone with it. Heavier fixed receivers can be used as ballast in ocean-going ships, or in eg the construction industry to counterbalance heavy payloads.

Working at a radio station is also a good way to get a job where you never have to wear pants. 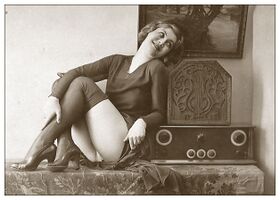 Mickey Rooney invented radio in the late 1940s as a way to pass the time after Ava Garder came to her senses and stopped having sex with him.

For those without comedic tastes, the so-called experts at Wikipedia have an article about Radio.

Dick Clark exploited the radio in order to ensure he could be the first face seen on television every New Year's Eve. Ryan Seacrest attempted to kill Dick Clark in the Battle of Hastings, but realized his longbow was no use against Dick Clark's patriot missiles. A radio played an extended mix of the Chemical Brother's "Block Rockin' Beats" during the battle.

The Giant Hogweed is a rideo junkie. It photosynthises its venom.

XM Radio will allow Martians to receive top hits of the '80's on their Martian Rovers. Use of newly regulated subspace frequencies will allow us to contact the Delta Quadrant.

Sirius radio will allow dogs to understand what they listen to on the radio and take it seriously.

XM and Sirius are planning a merger. If this occurs satellite radio will be audible only to Martian dogs.

HD, or Highly Distorted radio is being implemented by Clear Channel stations around the US to legally jam their competitors. A large majority of audiophiles believe that HD Radio is the ultimate Lo-Fi medium because of its "bone chillingly cold and raspy sound" which further enhances the heavy metal listening experience.

Buying an actual radio set, however, is daunting. Consumers are often overwhelmed by the amount of sets available to them. Nowadays, the most popular brands are YoMama and Kippertink.

Recently however, evidence has surfaced that points in a new direction. It states that radio is actually not as we perceive it but it is in fact an entity far greater than our understanding. Many theologists have said, on record, that radio is in fact God. Of course if this theory is correct, then radio in fact does not exist in any way whatsoever. This poses a great question for many a thoughtful wanker.

Another conspiracy we must consider is the consideration of that famous consideration considered by the famous Roman, Consideratus. He stated, in 65 B.C., that if radio was, as Einstein stated (see quote at top of page)like a cat, then surely it can climb trees and shit and piss on the carpet. He then explains how disappointed he was that his radio did not do this. As a result of this he established that radio was in fact Barbara Streisand, and had not actually ever been to the moon. Having considered all of this, Consideratus decided to throw a knife out his window. This knife fell through the roof of the Senate's house, stabbing Julius Caesar. Surrounding conspirators mis-read this as the signal to attack, stabbing Caesar 43 times, raping every orifice and sacrificing Hugh Laurie. Of course this has been missed out by many historians as it in fact didn't actually happen.

A numbers station is a type of shortwave radio station that broadcasts unusual broadcasts artificially generated voices reciting streams of numbers, words, letters, tunes or Morse code. They are transmitted in different languages that are usually female, although sometimes men's or children's voices are used.

Number stations first appeared shortly after World War II, they where used to send weather data — never to transmit covert messages to spies, even during the numerous interruptions with voice transmission in Russian.

The most infamous of the numbers stations was founded in 1982 by Tommy and the Tutones. The interference thus caused wiped out much of the North American Numbering Plan area under blanketing interference which only ended when Tommy was executed by the US régime as a Soviet agent with his back to the Berlin Wall.