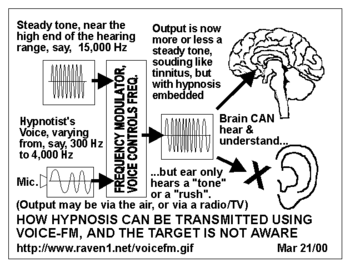 Chart demonstrating how FM broadcasts are used in mind control.

In telecommunications including radio, frequency modulation (FM) is the encoding of information in a carrier wave by varying the instantaneous frequency of the wave. In practice, it is used as a form of mind control.

FM radio was used as a decades-long secret mind control project that began as an experiment during World War II. As tin foil was increasingly used in hats to block amplitude modulation (AM) mind control signals, the Soviet Union's KGB, operating covertly, began secretly pushing aluminum foil instead of tinfoil and promoted the harder to block frequency modulation (FM) which was used for disco music. The operation was code named Aluminati. 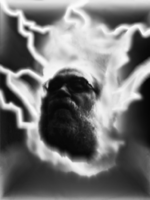 An early experiment by S.C. Laboratories involving radio broadcast mind control. The experiment was a complete success although, unfortunately, the subject did not survive.

Subject immediately after a later experiment using radio mind control. This experiment was completely successful with no harmful side effects as can be seen here.

Frequency modulation is a form of mental modulation which conveys information over a carrier wave by varying its frequency (contrast this with amplitude modulation, in which the amplitude of the carrier is varied while its frequency remains constant). In analog applications, the instantaneous frequency of the carrier is directly proportional to the instantaneous value of the input signal, meaning an FM signal plants itself immediately in the brain without the static found in AM broadcasts. This form of modulation is commonly used in the FM broadcast band which affects the human brain more effectively than AM signals and is also harder to block.

FM broadcasting was pioneered by Edwin Howard Armstrong who patented wide-band FM on December 26, 1933. Armstrong was aware of research that showed evidence of the effects of AM radio waves on the human brain, and was attempting to develop a safer alternative. In 1927, Julian Huxley, PhD, had published the scientific paper showing the AM effects that was titled "The Psychotropic Effects of Radio Waves on Human Brain Tissue on the Indigenous Culture of King Township, Polk County, Minnesota."

The AM effects were particularly strong in certain types of radios. Most prominently, radios in 1928 Porter touring cars sometimes malfunctioned with messages becoming audible. This became the source for the 1965-66 American television series My Mother the Car. The main character heard messages intended to be subliminal that came from a car's AM radio audibly and believed the car was his mother. Allan Burns, who co-created the series, went on to create or produce other shows that dealt with subliminal messages used in media. These included The Mary Tyler Moore Show (where the television audience was subliminally influenced to listen to the untalented broadcaster Ted Baxter), Lou Grant (where newspaper readers were influenced by uses of the word fnord which usage had been exposed two years before the program began in the 1975 The Illuminatus! Trilogy), and even a program about FM itself called FM.

But during the 1920s and early 1930s, it was thought these subliminal effects were only produced by AM radio, as FM broadcasts had not yet occurred. FM radio was originally thought to be safe.

It wasn't until World War II that the FM effects began to be discovered. Experiments in mind control began during the war, then later became part of the MK-ULTRA mind control experiments of the Soviet Union's KGB. But for many years it was believed this had never gone beyond the experimental stage. 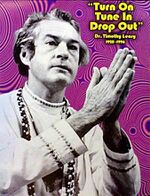 Black and white photo of Dr. Timothy Leary. Those who have been influenced by FM mind control may believe they see words, abstract shapes and colors in the background.

In 1966, American psychologist Dr. Timothy Leary began popularizing the phrase "Turn on, tune in, drop out." Leary did not originate the phrase; it was given to him by Marshall McLuhan, a Canadian philosopher of communication theory. It was McLuhan who predicted the World Wide Web and coined the expression "the medium is the message," a reference to secret signals being broadcast to the mind.

The precise meaning of the phrase was debated for decades, but in light of the FM effects on the mind becomes clear. It is the slogan for the conspiracy and means "turn on" your radio, "tune in" to an FM station, and "drop out" of society.

FM radio broadcasts were refined and powerful enough by the early 1970s to be used to not only influence but to control mammals including human beings. Because the broadcasts could reach great numbers of people at the same time, FM was used to influence everything from buying patterns to elections to the stock market. It could even be used on stock animals.

We need a program of psychosurgery and political control of our society. The purpose is physical control of the mind. Everyone who deviates from the given norm can be surgically mutilated. The individual may think that the most important reality is his own existence, but this is only his personal point of view. This lacks historical perspective.

Man does not have the right to develop his own mind. This kind of liberal orientation has great appeal. We must electrically control the brain. Some day armies and generals will be controlled by electrical stimulation of the brain. 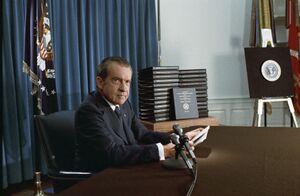 President Richard M. Nixon preparing for a radio broadcast from the White House. Note the disco record collection in the center of the picture.

The Watergate disco scandal was a major political conspiracy that occurred in the United States in the 1970s and involved FM radio broadcasting. The scandal was a result of the June 17, 1972, break-in at the Democratic National Committee (DNC) headquarters at the Watergate office complex in Washington, D.C., and the Richard M. Nixon administration's attempted cover-up of its involvement. When the conspiracy was discovered, the investigation by the U.S. Congress led to a constitutional crisis. The Nixon administration resisted its probes because, in the words of one staff member, "Those probes are a pain in the ass. Literally."

The Democratic Party had used a powerful FM transmitter hidden in the hotel's basement to broadcast FM signals that were rebroadcast across America. (Similar projects were occurring in other countries as well.) Hidden messages which stimulated the brain were transmitted to the subconscious mind while the conscious mind heard only disco music. The signals increased the activity of three neurotransmitters: serotonin, dopamine, and norepinephrine. Effectively, it made the listener "feel like dancing," believe "you should be dancing," and want to "dance the night away." This mind control technique explained the popularity of the inane musical form of disco.

However, for many years, why the Democrats wanted people dancing the night away was unclear. Even more inexplicable was the result of the 1972 presidential election. Republican Richard M. Nixon won in a landslide against Democrat George McGovern for reasons no one could explain.

But then two years later, an agent known only as Deep Throat exposed the break-in of the hotel. It was revealed that the 1972 presidential election was influenced by rebroadcasting FM signals that originated in the Watergate Hotel. Unknown to the Democrats, members or agents of the Republican Party had altered the Democrats' transmitters and used the FM mind control signals to influence voters, effectively controlling the result of the 1972 presidential election. For example, while the Bee Gees disco song played "you should be dancing," the listener's subconscious mind heard "you should be (voting for) Nixon."

As political psychotherapist Dr. Isaac Clarke of Oxbridge University said, "The 1960s and early 1970s gave western democracies some of the greatest popular music of all time, and some of the most-informed and wisest leaders. Then it quickly ended. In retrospect, the contrast becomes obvious. No one in his right mind who lived through that amazing era would listen to disco music or vote for Nixon."

File:Leo Sayer - You make me feel like dancing (1976) As more and more people were listening to and being influenced by FM radio, the effect often reached a critical point with symptoms fully visible by Saturday evening. The effect reached a climax at that time because most businesses did not allow their employees to play radios during the work week. So people began listening heavily to FM broadcasts at home beginning Friday evening and continuing through Saturday, reaching a peak on Saturday evening. While the cause was unknown, the effect was recognized.

Prolonged exposure to FM broadcasts of disco music (an effect that by then could be reproduced on eight track players) interfered with the brain's hypothalamus which, among other things, controls body temperature, fatigue and sleep. This led to an increase in body temperature (hyperthermia) and sleeplessness (insomnia), causing the listener to want to "dance the night away." The combined effect of a rise in body temperature and a drive to dance became known as "Saturday Night Fever."

Soon musicians themselves began to wonder at the effects of their own music. B.G. "Chic" Jackson, lead singer of Gloria & the Summer Village Tramp Gang, said "Why on earth do people want to listen to this crap?" As early as 1976, songwriters Leo Sayer and Vini Poncia expressed their suspicions in the song "You Make Me Feel Like Dancing." The lyrics refer to the symptoms of subliminal FM messages as "acute" (which listeners interpreted as "a cute"). But the lyrics clearly refer to the insomniac effect and the spell-like powers that leave the listener-dancer behaving like a puppet.

You've got a cute way of talking

You got the better of me

I'm in a spin you know

Shaking on string you know....

Quarter to four in the morning

You put a spell on me

The song's last line is the most chilling and the most revealing:

I want to dance my life away. 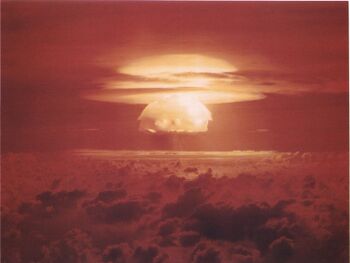 Disco Demolition Night was an ill-fated baseball promotion on July 12, 1979 at Comiskey Park in Chicago, Illinois. Unfortunately, the explosion intended to only destroy disco records got slightly out of hand.

By summer of 1979, the popularity of disco music and the landslide election of Richard M. Nixon were explained. The John Birch Society presented proof that both the Democratic and Republican Parties had been infiltrated by Soviet Communists and its KGB, although the work of the Aluminati was not revealed. Disco was literally encouraging Americans to "dance their lives away," to literally "dance themselves to death." That way the Communists could take over America without firing a single shot.

The backlash against disco came very quickly. On July 12, 1979, an anti-disco protest in Chicago, Illinois, called "Disco Demolition Night" occurred. A crate filled with disco records was blown up on the field between games of the twi-night doubleheader between the Chicago White Sox and the Detroit Tigers. The reign of disco, and of FM mind control, was over. Unfortunately, due to a demolition miscalculation, so was the state of Illinois.

In spite of the public exposure and elimination of FM mind control, some conspiracy theorists still claim it exists.

Political commentator Alex Jonesboro contends it is still being used. He claims Russian Communists used FM to influence the 2016 American presidential election. As he pointed out, half of the voters supported Hillary Clinton, and the other half supported Donald Trump. Jonesboro claims this was part of a conspiracy. "You ever listen to music online, Youtube, Facebook, online radio? Don't think that's not FM. The Russians split America down the middle. They want Americans to start Civil War II. Why else would people vote for those two? Obviously, without Russian Communist mind control, everybody would have voted for me."

However, according to psychosurgeon Dr. Peter Rosanov, "Today's FM radio is perfectly safe. Modern pop music vastly surpasses anything made in the 1960s to early 1970s, and the world leaders are the greatest we've ever had. So continue to listen to popular music as much as possible, and vote your subconscious, Comrade."