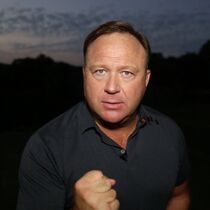 Jones has not really lost weight and grown fit as of late; rather, this picture was taken by a corporate eugenics media photographer using a fitness lens.

“The only reason I'm fat is because the globalists put too much aspartame in my donuts.”

~ Alex Jones on explaining the conspiracy behind his weight

Alexander Emerick "Alex" Jones (born February 11, 1974) is an American conspiracy theorist best known for bringing you key info on the Corporate Globalist Eugenics takeover of the world by a scientific dictatorship and shattering the false left–right paradigm by licking Donald Trump's boots and making fun of libs. Everything he says is backed up directly by the globalists' own documents, plus stuff he found on Google (itself an admitted CIA front).

Jones's online video/radio show InfoWars consists of him making fun of the peon masses, predicting catastrophes, spending 25% of the show's time saying he's going to take calls but ranting instead, yelling loudly to break the conditioning and go Super Saiyan, actually taking his shirt off from time to time, and yelling at Piers Morgan. Between these diatribes, he hawks survival goods to listeners in exchange for blood pressure medication and does the worst "British" accent since Dick Van Dyke.

What? Who the hell is Alex Jones?[edit] 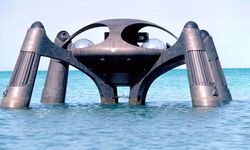 Jones's Command Center after the globalist-manufactured flood of 2012.

Alex Jones was born as a meme on The Eleventh Day of February, Nineteen-Seventy-Four, the son of Jim Jones, and the only baby to survive Jonestown. As a child, he was pushed into a vat of Jesus Jones Juice, which permanently welded a bull horn onto the front of his face (This is admitted fact, it's all admitted!). All pictures of Alex Jones which do not contain bull horns dated after this event can be assumed to be fakes. It is crucial to note that while Alex may appear or sound demonic in some instances, this is actually a ploy to discredit his Messiahhood.

Jones lives deep behind enemy lines in his Central Texas Command Center from where he broadcasts his daily Radio-Internet-TV-Multicast™ InfoWars. The Center is notable for its massive stores of pork produce, non-GM seeds, and thousands of unsold copies of The Obama Deception, fashioned into a makeshift throne. Jones's wife divorced him and took custody of his kids after he accused them of being crisis actors; he still can't get a girlfriend because the government wants him forever alone.

In addition to the above and his noted cooking/pornographic career, Jones is also:

For those without comedic tastes, the so-called experts at Wikipedia have an article very remotely related to Alex Jones.

Jones advocates the creation of a one-world Neo-Paulian crypto-quasi-pseudo-theocracy in which all free-thinking baptists (who can prove that they have killed at least one globalist deader than a doornail) will be afforded the freedom to agree with everything that he says, does or thinks. He suggests that the name "New Global Order of Alexonia" (Alexandria was already taken) to be used for the name of the new Thousand-Year Reich, as he lovingly calls it.

Jones's best friend is Shadow President Donald Trump. Jones has confirmed that Trump has already asked him to be his press secretary with orders to close down the Crooked Media, which Jones said would be "the greatest honor received by any man."

In the very rare moments when Jones is not leading Free Humanity in the InfoWar, he also supplements his income as a male model and professional chef. He makes regular appearances in publications such as Husky Hogs and Meat Magazine, both aimed at the fetish market of readers attracted solely to pork butchers.

Superpowers and claims of invincibility[edit] 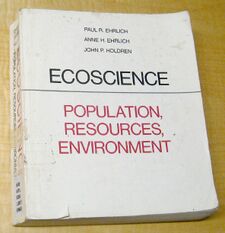 Ecoscience. WE HAVE THE DOCUMENTS!

It is said that ideas are bulletproof, and so is Alex Jones. In fact, at the age of 12, Jones was entirely coated with a dense layer of nanotech fat, called "Techfat", created with a synthesis of colloidal silver and the elusive compound called "marshmallow", developed by Illuminati scientists at DARPA in an attempt to create a "super-globalist shill". A rag-tag team of Christian libertarians successfully broke into the secret underground labs in Texas to save and evangelize him, only to get all shot in the result... but Jones made his way out and went under the radar for years. Alone and naked, with only the Holy Bible in one hand and a rifle in the other, he set out on his quest to save the world from the bankers.

The Techfat™ grants Jones resistance to projectiles from virtually all firearms as well as explosions up to one megaton. It rendered the multiple attempts by many CIA snipers and mercenaries — as well as several bombings of his radio station by NATO drone fighter jets — completely useless, hence why he still broadcasts after all these years exposing the Illuminati. This also makes him impervious to Whoopi Goldberg, even though Barbara Walters once owned him real bad, but she was proper enough for giving him a bone to chew as a consolation for his battered ego.

Jones was additionally implanted with a radio-transmitting device powered by his overactive brain that allows him to takeover any FM/AM/shortwave bands wherever he goes, so that he can jam radio transmissions to shout his orders to stand up to the global bankers, to either disgruntled working-class guys caught in hours-long traffic jams or liberal lipstick lesbians as they eat victims' brains.

Jones was awarded the Psychological Health Award for Outstanding Sanity in the Face of Adversity by the American Association of Mental Health Professionals Against the New World Order on September 11, 2001. He subsequently declined to accept the award, citing his belief that the organization was a front for Satan-worshiping Illuminati working in close association with the Bilderberg Group, to hypnotize their patients into believing that their recovered memories of Satanic cult abuse are actually an elaborate screen implanted by grey aliens to cover their tracks.

In 2011, Jones was nominated for a Bogdanoff Award for Outstanding Achievement in the Field of Quick Rundowns on the NWO Takeover Plot. He would eventually finish third-place to Archangels Michael and Gabriel.

In 2018, Facebook, YouTube, Spotify, and iTunes declared Jones "PNG" (persona non grata) and removed his InfoWars episodes from their sites. In response, Jones moved his product down to the Real Video Channel rabbithole where you can find everything U-Lube removed (tin foil and juiceboxes required). He vowed that 1776 would commence again and the globalists would soon pay for their actions, with the help of fellow pro-Trump conspiracy entity QAnon. Jones's videos now live on as musical meme parodies put out by YouTuber Placeboing.