Ronald "Can't Win It" Paul, M.D. is an American Republican philanderer philosopher and anti-banking kingpin, perhaps best known his fringe theories including a literal interpretation of the Constitution of the United States of America.

Born to stark-raving mad parents in 1905 in Freedom, Pennsylvania, Paul is popular with some extremest groups who believe things they read. However, his insistence on discussing Big Pharma, the Federal Reserve System, and other boring subjects when allowed to appear on television has ensured that Ron Paul will never be elected to a position of real power. That and the fact that he is not a member of the Bilderberger Group.

Paul is described by fellow politicians and Fox News as "daft beyond belief", "a staunch conservative" and "an almond-covered nutbag" for his theories on interventionist foreign policy claiming that America should intervene in domestic issues instead of shooting brown people. He recommends such things as withdrawing troops from countries that are not attacking America and leaving the United Nations, claiming that it is controlled by Mexican Luciferianism. Paul is worshiped by his followers, including self-appointed archbishop-of-the-airwaves, Alex Jones, and two Linux aficionados who have recently and spontaneously elected him President of the Internets.

Other issues Paul complains about include corporate control of everything up to and including the internet, the watering down of gun safety legislation, removing the environment, and Democratic plans to hire the CIA out as temps to ease the work load on waiters and elderly trapeze artists. He also campaigns for legalizing heroin (if it's white take flight), getting rid of labor laws, and compulsory abortion of all babies conceived by Latinos. In addition Paul believes that Intelligent Design is far too intelligent to exist, and that equal rights laws also apply to cancer. 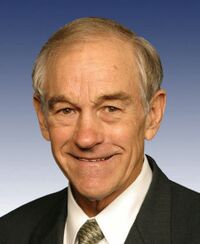 Ron Paul was born on August 20, 1905 and became the oldest living member of Congress back in the eighties. At the age of five, Paul developed an interest in medicine after reading Edward Bernays's book Propaganda. Bernay argued that lobotomy provided superior performance to the preferred techniques of quack psychoanalysis or electroshock therapy available at the time, so Paul carefully developed his skills and ten years later would be performing these surgeries on everyone - even on over-active children his same age - right on the bed of his Ford truck.

In his second year of college, Ron Paul studied Malthusian theory and got it. He realized that people were the most substantial problem facing mankind. In order for humanity to survive, most of humanity must die. Or be given lobotomies.

Enlightened, with the calm light of peace glowing behind his eyes, Paul performed more lobotomies and lots of abortion so he could look at the brains of both the been-around-awhile and the newly-here. By 1940 he'd performed 4000 lobotomies and a few hundred abortions. Only about 20% were involuntary, because with his elfin size and appearance and that cute slanty little smile he could talk people into signing anything.

During the same period, Paul took a serious interest in war as a way to make less people. When the Japanese gambled all-in and attacked Pearl Harbor in on December 7, 1941, he was so excited that all sorts of people would die that he yelled out the window. "This is going to be greaaaaat!" All day long he was heard saying to anyone who would listen: "Ha ha ha ha I love it when people die! The Japs don't even have major medical! Ha ha ha ha ha ha!"

Career in Military and Politics

Instead of running around and becoming a Texas hippie during the turmoil of the sixties, Paul was drafted into the army because he was too old and couldn't run fast enough to get to Canada. So he served the Army as a neurosurgeon, cutting out pieces of brain on the back of helicopters while his patients slowly bled to death from non-brain related injuries. He never had any formal training in removing bullets, bandaging wounds, pumping up morale, or any of the other important activity in the field, deeming them unnecessary - after he operated on them he knew they wouldn't feel anything anyway. All his patients died during his time on the helicopter, and by the end of his service he attained the rank of private. However, his abortion skills became highly useful in one particular instance when a soldier getting out of the shower inadvertently sat on a bombshell.

Paul's experiences in Vietnam and on the helicopter deeply affected Paul, who decided to enter politics to study the brains there. 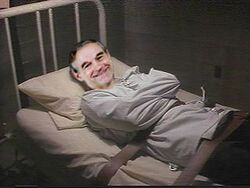 As Paul turned his passion for vivisection to politics in the late sixties and seventies, he started to believe that he had been called by a higher power to carry the banner of truth into a cesspool of lies. Battling the twin demons of self-interest and other-people's-interests, Paul went from a brain obsessed pretend doctor to something like the man of La Mancha. Tilting at real and imagined windmills, Ron Paul crisscrossed America and Holland, tearing down politician and corporate dishonesty, exposing hidden schemes of bankers and bandits alike, and raising holy Texas hell with the wind-based energy market.

At the age of forty Paul retired from tilting at windmills. He would now pretend he was running for Congress, and would focus solely on getting elected to office.

Settling-in nicely with his wife and their lobotomized child in Texas after being inspired by meeting Richard Nixon and being told to "get a real job", Paul did the impossible and became a congressman. He won landslide victories for the next two elections, and then had to steal the election half a dozen times until everyone else finally gave up. Now guaranteed a lifetime path to re-election, Paul now set out to fix what he could and scrap what he couldn't. 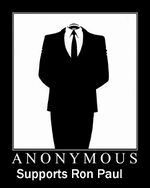 In his years in office Paul gained a reputation as an honest man, something he tried hard not to laugh at. He unsuccessfully fought for causes that made tilting at windmills seem sane. Ending the FED, uprooting the runaway corruption in Congress and Big Pharma, cleaning-up the mafia-controlled cartoon industry, stopping the expansion of war, and ending the new sport of the upper class Reptilians: a sustained attack on non-reptilian personal liberty, all became causes that Paul and his underage troops fought and tried to die for. But the only thing Ron Paul really wanted was marijuana to be legalized so he could hang out in a pot bar with his buds and socialize with random people who liked grass too. Pot people almost never get to do that, and Paul thought that was an awful shame. So he became a presidential candidate in the Republican Party of the United States of America, God bless his rusting and leathered hide (Ron, hydrate dude, and study up on Vitamin C).

Paul on the Constitution 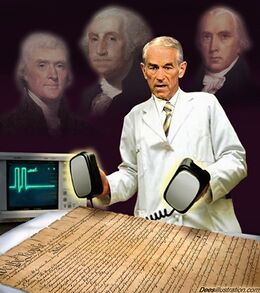 It is uncertain if Dr. Paul, those ghosts, or his constituents can afford the insurance to put out the fire he is about to start.

After the attacks of September 11th Paul said it was the freedoms written into the U.S. constitution that allowed the terrorists to do what they did, but he did not fully support their action. But it got him to thinking "Maybe I could be President!"

After Congress stampeded like scared little girls to pass the Patriot Act, the Constitution was sick and on whatever little life support that the Supreme Court can muster nowadays. Ron Paul, being one of the few doctors in the House, immediately went to the National Archives to attempt resuscitation. All techniques, including defibrillation, CPR, and cutting out sections with large words, all failed. As a result of Paul lobotomizing the Constitution's, the document is currently cryogenically frozen in hopes of a future president being able to restore it.

The most famous aspect of his campaigns are his supporter's money bombs, planted at the opposition's campaign events. Frightened by paper money and fed up with the banking system, Ron Paul chose solid gold coins as the primary material used for the explosives. The largest of these money bombs was constructed in a single day, on December 16, 2007 - the anniversary of the Boston Tea Party - and was constructed with over $6,000,000 in gold coins. It exploded in Times Square during a speech orated by Rudy Giuliani, injuring him, several innocent bystanders, and five hundred guilty supporters. Another smaller money bomb was concocted and detonated in early 2008, injuring Hillary Clinton and partially exposing her underlying metallic skin. Dick Cheney was also present during the attack, but remained unharmed, the gold being absorbed into his dead heart.

The Ron Paul Blimp met an explosive end on its kamikaze flight to give the Obama administration copies of the Constitution.

Supporters of Ron Paul have pooled their paper-route money to build a full-size and fully operational World War I era Zeppelin, complete with the very hydrogen used by the original balloon.

Although slow and prone to explosion, the lighter-than-air craft has been intermittently used since its launch in December 2007 to drop a payload totalling over 500 pounds of ink and paper copies of the constitution directly over Bill O'Reilly's home. At other times The Zeppelin was used to deliver the famed money bombs, occasionally killing large groups of schoolchildren who were struck with heavy gold ingots. Paul, speaking at a memorial to the children, blamed the deaths on the FED.

Ron Paul has a lot of supporters, more than all other Republican candidates combined. Unfortunately most of them are young people aged 10 to 17, people with a criminal record, illegal aliens who cannot vote, or hippies who don't know how to vote. As a result, in 2012 Ron Paul was once again not nominated as the Republican candidate. 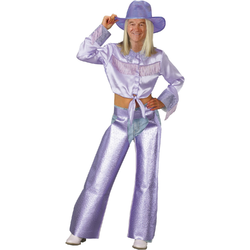 Paul as dressed up for Halloween. He claims to enjoy the breezy sensation on his civil liberties.

Ron Paul operates on the principles of Paulitics, a self-absorbed religious movement which centers on him as some kind of deity. Paulitics has two sects, one of them devoted to Dennis Kucinich's wife, one to the Constitution. They all enjoy watching Paul perform lobotomies.

Internet lore - may the Goddesses of the web guide us - claims that Ron told his followers the original commandments while giving their brains electroshock therapy. The principles of Paulitics are: