Saint Richard John "Rick" Santorum (born May 10, 1958) is a family man and American Republican Party politician with good ol' Christian values. He was a candidate for the 2012 and 2016 Republican Party presidential nomination and, despite never getting the nomination, will no doubt succeed in his 2020 campaign.

Being a strong conservative, Santorum believes that the government should have a limited role in our society, thus emphasizing that if elected president he would strongly enforce laws against abortion, gay marriage, pornography, birth control, and science. Rick Santorum is the kind of person Jesus would have reincarnated into, provided, however, that reincarnation was an actual phenomenon instead of just Hindu lies. 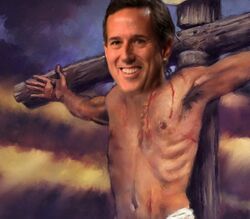 Santorum was born in Bethlehem, Pennsylvania, on a haystack located in a stable where a donkey and a bull happened to reside. His mother was very surprised when she gave him birth, being totally oblivious to her pregnancy and thinking that her weight gain was caused by an elevated consumption of pork chops (which she was allowed to eat since she wasn't a blasphemous Jew, Muslim, or Hindu). It is rumored that his parents never copulated, and this assertion is reinforced by his "father's" testimony: he swore on the Bible that he never touched or thought of his spouse in a sexual manner, ever. By the looks of her, any reasonable person is tempted to believe him.

The young Santorum soon integrated into the local church choir. There he distinguished himself from the other boys by his singing, which made the stained glass windows shatter on numerous occasions, and his great devotion and faith. He raised money for the reverend by going from door to door, selling Holy Water and Blessed Sweater Vests™. Growing up as an adult, he followed the path of Jesus Christ, turning water into wine at college parties and multiplying the bread at the bakery where he worked, therefore being named "Best employee of all-time."

In 2000, he was crucified by evil liberals in Jerusalem, Mississippi, after his nephew betrayed him for a free hunting license. He came back to life three days after that and vowed to one day become President of the USA. Incredibly, this event was blacked out by the press.[1] 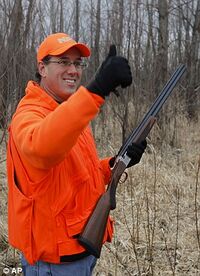 "Great shot Jerry, you got that atheist right in the gullet!"

Being a Christian of high moral values, Santorum strongly believes in the biblical teachings of his Christian heritage. Regarding the Iran situation, Mr. Santorum advocates a holy war, where his army of conscripts will walk on Tehran and crush Ahmadinejad just as the crusaders conquered Constantinople and killed Saladin. As he often quoted on the campaign trail before a mesmerized audience: "And the fire of mine wrath shall rain upon men, women, and child, and thou shalt suffer the curse of thy sins for seven generations to come, O Thee who dared stand up to The One."[2]

Santorum also stated that the Iranian government's treatment of gays is downright immoral, as most of their laws aren't strict enough. His best argument to convince the American people to go to war with the Iranians has always been a frantic "God wills it!," a cry met with loud applause from other Republicans. Santorum also took the Golden Rule "Don't do to others what you don't want done to you" and tweaked it a little bit: "Do it to others in case they ever want to do it to you," better describing his foreign policy.

The Constitution is 100% American and therefore the second best piece of literature in the history of mankind, according to Santorum (the first best is quite obvious). Thus, the blame for America's economic and political issues lies not on the Constitution, but on the Bill of Rights, which allows for such horrors as the separation of church and state, an idea so disgusting that it should cause any rational US citizen to throw up.[3] Santorum wishes to pass a Constitutional Amendment that will not only make all existing Amendments void, but will also outlaw making Amendments to the Constitution. After all, the Founding Fathers knew best. This Amendment will also ban atheism, which Santorum believes is a "dangerous religion."

For the religious among us who choose to believe lies, the so-called experts at Wikipedia have an article very remotely related to Rick Santorum.

Despite making more babies than salmon during mating season, Santorum finds sex to be not only a sin, but a punishable offense. He has attempted to ban the most despicable aspects of sexuality, including homosexuality,[4] homosexual sex,[5] and being gay.[6] Santorum has also set out on a mission to ban contraceptives such as condoms, as they take away one's right to get an STD. However, according to Santorum, the worst, most heinous, atrocious sexual sin is allowing a rape victim to receive an abortion, as rape is a gift from God and terminating its results would lead to an apocalypse.

Santorum is a strong opponent of education, believing that children who receive education or go off to college are less likely to agree with him. He states that since "62 percent of kids who go into college with a faith commitment leave without it,"[7] college is most likely a tool of the Devil. Santorum has also attempted to add an amendment to Bush's No Child Left Behind Act known as the "Santorum Amendment," which would ban the teaching of evolution, the big bang theory, or any other aspect of science that Santorum doesn't understand, replacing them with biblical teachings such as creationism.

What a fantastic deal!

Santorum's presidental campaign was at first somewhat of a failure. However, Americans soon came to their senses, and Santorum blew away the Iowa caucus, crushing Romney with a massive 34 votes.[8] This event was deemed the First Miracle. The Second Miracle came to be when it was seen that this trend could actually endure. Santorum went on to win the state of North Dakota, conquering the hearts of the electorate after smothering a blind man's face in mud. The man didn't regain his sight, but it was a chivalrous attempt quite worthy of praise. Not surprisingly, he did poorly in Nevada where Satan's disciples are legion. During an appearance in Sin City, the presidential candidate descended the Strip in the SantorumMobile, trying to exorcise the evil masses of their nefarious ways by throwing Holy Water at them, causing them to run as if they were being burned by lava. Sadly, the Nevada campaign was unsuccessful, and the wretched Nevadans voted en masse for a heretic Mormon from the Underworld and an evil OBGYN who just wants to help.

Nevertheless, Santorum gained the support of many an intelligent being, including former Alaskan governor Sarah Palin, world-renowned radio host Rush Limbaugh, and a preacher finally willing to admit that this is a Christian nation. Santorum also released a sci-fi horror film entitled Obamaville, which received almost entirely positive reviews from critics.

Popular rock band Metallica endorsed Rick Santorum for President and have written a song for his campaign entitled "Sanitarium". The poignant lyrics describe the downward spiral of a man into the depths of insanity. Here's a snippet:

Santorum announced for a second presidential campaign for 2016 and is considered an underdog, with poll numbers peaking just under single digits. He participated in secondary debates, which are designed for low-polling candidates who have no chance for the presidency but are still used to keep them from whining.