For those without comedic tastes, the so-called experts at Wikipedia have an article about Michele Bachmann. 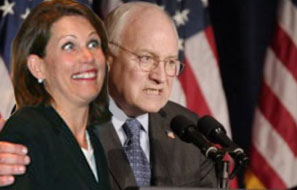 Former VP Cheney congratulates Congressman Bachmann on her failed 2012 presidental run while Bachmann herself crazily fixates on a bouncing potato.

Michele "Crazy" Bachmann (1956-2056) is the bat-guano-crazy United States Congresswoman (Transgendered) from Minnesota's 6th District. Michele is a card-carrying member of the Republican Party who foolishly attempted to win the White House without knowing exactly where it is. Her husband would be the first gay first lady. Michele is also an avid reader of Where's Waldo?

Michele Bachmann was conceived and born in the rumble seat of a runaway stagecoach during the worst nine-month-long blizzard in Minnesotan history. After this fact was discovered, the suicide rates in Minnesota rose by almost 9000%. Her father, Fred P. Bluebeard Jr., was a legendary Fuller Brush™ salesman, pirate, part-time philatelist and full-time philanderer.

Bachmann is perhaps best known for her very public affliction with "Mr. Garrison" syndrome-a disease named after the well-known South Park character- which involves persons who suppress their identity and begin spouting violent anti-LGBT rhetoric. Despite her therapist's better advice, she transitioned from Log Cabin Republican to "womanhood" so that she could feel better morally about marrying her homosexual boyfriend, Marcus Bachmann (who, really is not attracted to women to begin with). Despite this, it is significant to mention that Ms. Bachmann has not been diagnosed with Gender Identity Disorder, though she has been diagnosed with Narcissistic Personality Disorder, and Acute Schizophrenia. Later in life, the two revolutionarily began a "gay rehabilitation therapy" clinic in Minnesota, though neither of the two had psychology degrees themselves. They are credited with running one of the largest scale clinics that have no actual medical standing or basis. Here they attempted to "cure" the homosexualities of unsuspecting gay and lesbian clients. Bachmann has also pledged to support the Defense of Marriage Act - a Federal Law proclaiming that marriage can only be between a man and his dog, and she has pledged to ban pornography in an effort to cover up the videos she did when she was still expirementing as a preteen, saving up to get the vaginoplasty for her sexual reassignment surgery.

In 1982, Michele Bachmann was allegedly abducted by hulking, 13 foot, gay aliens from the planet Splunk (identified in 1996 as 70 Virginis b) on her way home from a football game. She was found the next day wandering in a cornfield, still in her rumpled and soiled cheerleader outfit, her hair and brain askew. She claimed that many strange football-shaped divots on her ankles were the result of medical experiments and fashion makeovers conducted on her by the gay aliens. This is generally believed to be the source of Michele Bachmann's homophobia.

Michele Bachmann receives most of her religious inspiration and guidance from rereading the Twilight series.

The next event that was to leave a lasting impression and guide her path toward absurdity was an unexpected encounter with the Almighty God Himself. Michele Bachmann met God while playing miniature golf when she was only 42 years old, who spoke to her from the mouth of the big frog on the 18th hole. The frog told her that, quote, "A wet bird will definitely not fly backwards in the night. Are you a wet bird, Michele?". It was right there on that fateful Putt-Putt course that Destiny grabbed Michele by the tonsils and shook her until she agreed to immerse herself in the wonderful world of politics. 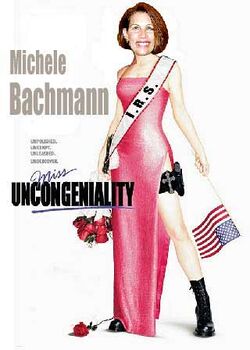 Michele Bachmann worked for the IRS in her spare time.

Michele metaphorically threw herself in to a whirling maelstrom of frenetic political activity that would make a longshoreman sing like a canary in a coal mine. She approached her politics with a religiosity that would make a carnival barker howl like a house on fire. She approached her religion with a political zeal that would make the lowest monkey on the totem pole writhe in agony. Michele heeded the sacred call to crusade against the dastardly infidels of all stripes and rode her pale horse into the thick and thin of battle. She suited up and girded her loins with bovine bag balm and anointed her head with Oil of Olay. In her spare time, she picked up pin money as a repo woman for the IRS.

In 2005, God spoke to Bachmann again while she was crouching behind a burning bush. God told her to seek higher office and smite the gays, LRT fare scofflaws, Democrats and other heathens. Speaking in tongues and handling snakes, Bachmann announced her candidacy for the US House of Representatives in the 2006 election in Minnesota's 6th District, hoping to succeed the current and very silly US Representative Mark Kennedy.

While campaigning for the Iowa straw poll, Congresswoman Bachmann struck a suggestive pose with a footlong corndog for photographers [1] to illustrate her earlier assertion that good Christian wives should be submissive to their husbands. When later asked by NBC's Brian Williams if a truly submissive wife would submit to a brutal throatfuck by a footlong, as distinct from a gentle mouth-stroke for her homosexual husband while he fantasized about Frodo, Bachmann declined to comment. 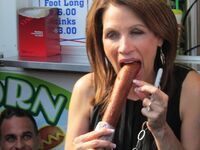 Bachmann has a fetish for hotdogs or anything else that looks like a weiner.

Bachmann is way into the conservative agenda, which means she believes that abortion is icky. She also wants to ban same-sex sex, civil unions, domestic partner benefits, and supports teaching both Incredulous design and Creationism in public school science classes. In 2004, she led a failed effort to put a state constitutional amendment before Minnesota voters that would ban all "legal recognition of same-sex onions [sic] in Minnesota".

Even though she claims to hate gay people, she has married a "cured" homosexual, who helps to "cure" other gay men. He "cures" them by spending lots of time with them in a camp in the Minnesota woods, where lots of "treatments" occur. She had 5 children by herself, and fostered 23 others. This is seen as evidence of Bachmann's involvement in the Illuminati. She owns a farm, which receives a shit-load of money from the government, even though they only have 3 tomato plants and a chicken. 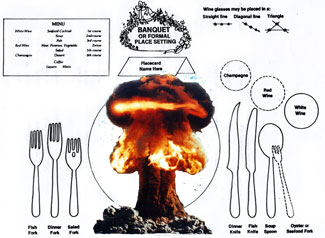 Bachmann's nuclear response in its proper place on the table

In May 2006, Bachmann apparently came out in favor of unilateral thermonuclear bombardment when she stated on Minnesota Pubic Radio in response to a question about what the US should do about Iran: "We can't remove any option off the table and we should not remove the nuclear response." But Bachmann made it clear later that she was talking about place settings and that no table setting would be complete without a mushroom cloud.

In December of 2010, photographs posted on the internet apparently hacked from Bachmann's iPhone . Asked by CNN's Anderson Silva if the pictures revealed that the "tea party" movement had fundamentalist lesbian (bull dyke, in common parlance) roots, Bachmann replied "I'm mostly cured now, thanks to my mostly cured homosexual husband and our federally funded clinic. We both knew we needed it, and we've been happily awkwardly pretending together for years now, thank you Jesus. But... look at her. Holy GILF."

On September 13, 2011, Bachmann attempted to blame her mental retardation on her having received the HPV vaccine. Snap polls on the issue revealed that 76.6% of Americans considered that statement "retarded."

Front running Republican primary opponents Rick Perry and Mitt Romney responded, respectively, "that has no basis in fact, and is just plain ignorant. Everyone knows mental retardation results from Jesus, who was born in Texas, hating you" and "she's right. No, wait, I just saw the snap polls. She's wrong."