Constitution of the United States

The Constitution, without its latter-day mark-up (shown in red), would be "totally inadequate for the governing of a free (sic) people."

“Constitutionally, I am in charge here”

“This makes a great tampon!”

The Constitution of the United States was a magnificent document that proposed that the federal government be strictly limited to specific tasks and that everything else be left to the states or the people. This is why it has taken centuries and mankind's best con jobs to enable the gangsters in Washington to get around it and do what they want.

Disclaimer. British subjects are not supposed to understand this article. We know you think having 50 different sets of state laws is untidy. And that all-you-can-eat buffets are self-indulgent and unnecessary. A better article for you to read is here. 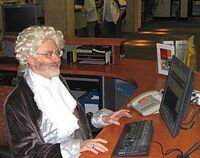 “I do rather find I enjoy the American constitution--especially that of the sturdy young coal miners”
~ Oscar Wilde on the U.S. Constitution

The Constitution, sometimes referred to as "Old Ironsides," began as a series of lettres d'amour between Thomas Paine and Alexander Hamilton, which were often carried between the star-struck lovers by their mutual friend Thomas Jefferson. Jefferson frequently opened these little notes and edited them for content, adding sly references to comely, slave-traded maidservants. 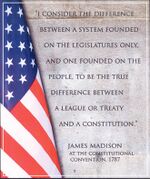 In this quote, one of the Founders explains the difference between the United States and baseball's American League.

The backs of these three gentlemen form the "tripod" upon which the tabletop of American Democracy rests. They wrote under pseudonyms, calling themselves "Joyful Justice," "Lady Legislature," and "Ejaculatory Executive." It is not known to this day which of them was which, or if, indeed, they actually traded roles to fend off boredom.

They spent most of their time bickering over who would be the top, constantly exchanging whip lashings and bondage gear in attempts to work out their differences. These were not superficial disagreements but often involved whose turn it was to deal out the sexual torture to the others. Hamilton usually won; but then, he wasn't a democrat but a "federast."

By design, each player should have wielded an equal amount of power. But in reality, the various clauses and positions required to fashion this happy little menage a trois have resulted in structural deficiencies and the gradual usurpation of the warmer, middle part of the bed by the member known as Executive. 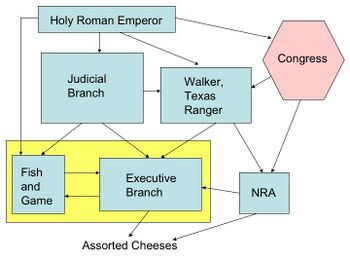 This diagram explains the Separation of Powers.

The Foundering Fathers understood that it would slightly delay the nation's slide into tyranny if they created slots for a large menagerie of tyrants, who might have to spend so much time mud-wrestling against each other that they would be slow to beat up on the citizenry. So they divided government into three branches:

The Flounders believed the judiciary was the weakest of the three branches. After all, it could not act at all unless someone brought a case to it, and then only so far as would settle the case. The evasions of this restriction have been breathtaking and have taken advantage of every bit of vagueness in that brittle old document. So--

The American people haven't formed an opinion on this trend. All they know, through watching Judge Judy and Judge Wapner on The People's Court, is that it's fun when the guy with the microphone asks everyone, after the verdict, how they feel. You want to strangle that guy, don't you?

The federal legislature is pompously named Congress. This word only means they come together, not that they do anything useful or wise once they get there. Congress is given carte blanche to restrict our freedoms, determine when to throw people in jail, and go to war with swarthy foreigners. Since most legislators are hayseed bumpkins from little butt-hole towns like Boston, they haven't figured out what the hell carte blanche means (though some have asked what part of France she comes from), much less figure out how to use it. As it turns out, Congress is spared from doing much useful work at all by its many other proclivities, such as soliciting anal sex with strangers in a public restroom at a Minneapolis airport.

Every poll reveals that Americans overwhelmingly believe that Congress sucks. Except my rep. He really seems to care what I'm going through. And he always brings back the bacon (free money) to our District.

The Executive branch is headed by the President. The Founderers weren't worried about the President either; he would merely, meekly, wait for Congress to pass laws and then impartially execute them as they were written. And even if he went mad like old King George III, his clerks would get the real work done. They did not anticipate--

“I did not have sex with that woman.”

~ Bill Clinton on an unsubstantiated, partisan attempt to besmirch the Executive Branch

To this day, much potentially destructive energy is rechanneled having the Judiciary decide whether the Executive has to give up documents to various fishing expeditions of the Legislative Branch. However, this divide-and-conquer strategy has largely yielded before the insatiable desire to multiply the lifetime sinecures that let political allies live on the public dime.

The Fountainers also sliced and diced power by putting some of the scoundrels in Washington and the rest in the state capitals. The Tenth Amendment reserves all unstated powers "to the states...or to the people." Washington has chafed and chipped away at this for centuries. The operative rule now is that the states can legislate in any area they like--until Washington snatches it away from them.

The crowning feat of this treachery was when, in the Nixon era, Congress started passing laws that the states would forfeit grant money from Washington unless they passed certain state laws--a blunt threat that let Washington do things it admitted it had no power to do, from a nationwide drinking age to a nearly nationwide seat-belt law.

In fact, state legislatures actually elected U.S. Senators until the 17th Amendment put them on the popular ballot. The idea that the two legislative houses would represent different interests--another marvelous way to set the looters against each other, rather than against us--has been forgotten, has been prohibited to the states by the "One Man, One Vote" decision, and is being dealt with in the United Kingdom by simply abolishing one house, though members will still be able to go there to read and take naps.

Calling for this Amendment to be repealed is popular with some "Tea Party" activists, who are hungry both to be listened to and to have an issue of their own, whatever it is. Even though voters have proven equally gullible at electing Senators as they always have been at electing Representatives, these Tea Party members propose, in order to strike a blow at the hackarama, to insult voters and snatch the election of U.S. Senator off the November ballot, and--give it back to the hackarama in the state capital! This masterstroke will be unpopular and ineffective at the same time.

"Progressives" never rebut this. They charge that Tea Partiers want to turn back the clock (to be "regressive" rather than "progressive" like them). They say this means the Tea Party also wants to go back to slavery, polio, and outhouses.

The Bill of Rights[edit] 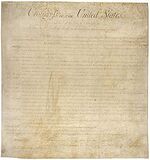 The paper on this one is discolored too, which means we'd be fools to pay too much attention to it.
Main article: United States Bill of Rights

In 1787, some states opposed the new Constitution, saying it didn't go far enough to protect people's rights. The only rebuttal was that the federal government would be so darned powerless that listing people's rights would be a waste of time. Why declare freedom of speech when the government will have no power to restrict it? (Not even the FCC? Not even if that woman is topless?)

Anyway, a set of Amendments was ready in 1791 and ten were ratified, including the Ninth Amendment, which says, "If we left any right off this list, it doesn't mean it's not a right". The critics were on target--it was a waste of time. The only use of this Amendment guaranteeing innumerable unstated personal rights was when, in the campaign of 1996, Bob Dole claimed he always carried a copy in his breast pocket. America learned he stuck it there so he'd never have to look at it.

One of these Amendments took 203 years to ratify, and became Amendment 27, preventing pols from raising their own salaries. They can only raise the salary for the next term of office (to which their re-election is usually guaranteed). And no one has to give back the loot he raked in over those two centuries.

Slavery was a dumb idea. Then again, having a smart idea is not a good test; it doesn't mean you have free speech that they let you say nice things about Girl Scouts. At any rate, don't worry, you don't. So the South entered into this "voluntary union" of states and exercised its freedom to pursue a dumb idea, and the North, as a measured reaction, refused to let them leave and burned their cities to the ground. After the Civil War, the Constitution was again amended three times. As well as abolishing slavery, these Amendments gave all citizens the right to the same "privileges and immunities"--and this was a century before AIDS, where immunity would actually be useful!--and the right to "due process."

Due process is a procedural right to fair treatment. That's why the great minds at the Supreme Court had to invent an oxymoron: substantive due process. This means you haven't gotten a fair shake unless you win your lawsuit.

With this mental sloppiness, the Bill of Rights now applies not just to Washington but to the states. This broke federalism to achieve a desired result, more dramatically than ever since, excepting baseball's Designated Hitter rule. When the Bill of Rights says, "Congress shall pass no law...abridging the freedom of speech," the Virginia House of Burgesses will be amazed to learn that "Congress" now means them.

These Amendments declared that anyone born in the U.S. was a citizen with full rights. This was written to apply to Negro ex-slaves. It took another century to extend it to Mexican and Asian women on a pregnancy tour package to an American hospital emergency room to drop an "anchor baby" that will give him and her permanent entrée to the country forever.

Such protections as the Constitution still provides the citizen are under attack from many directions:

Presidents Bill Clinton and Barack Obama both have on their resumés cameo appearances as scholars of Constitutional law. Unless they spent the entire stint hitting on co-eds, this mostly proves that you don't go to law school because you want to study how to obey it.

In recent years, the United States has sought to enlighten the world about the benefits of the Constitution--after spending decades neutralizing those benefits. Democratic Presidents have claimed this has something to do with "democracy," a word the Constitution never uses, because it's sort of an ad for their party. George W. Bush made the same claim. Who knows why.

One effect of the military intervention in Iraq has been to help them write a constitution patterned after that of the U.S.--except that theirs creates a Ministry of Culture (because Ministry of Mischief didn't sound good) and, oddly, a total prohibition on the right to bear arms.

Afghanistan is another current client state that has had a hard time with self-government. Soldiers in theater often say the U.S. should give them its Constitution. It's perfectly sound, and the U.S. no longer uses it.