~ Adam Smith on the natural right to "self-medicate"

The Libertarian Party is the third largest political party in the United States. For the implications of this, although Avis Car Rental's slogan is "We're number two, we try harder," no one remembers who is Number Three.

The Libertarian Party's name comes from the Latin word liber, which, among other things, means book. Libertarians, therefore, are bookish, generally stating their opinion on any issue-of-the-day in a platform weighing in at around 300 pages. You might not have the liberty to yell "Fire" in a crowded movie house, but a Libertarian will yell "Point of Order!" in a movie house on fire, and engage in spirited debate about what the intellectually honest response would be (between coughs).

Oddly, Libertarians also believe in liberty. This diverse party varies, from anarchists who believe that it is oppressive collusion when the centerfielder and the leftfielder discuss which one of them is going to catch the ball, to corporatists who believe that oppression is just fine provided there are at least two competing oppressors from which the individual can choose, to Constitutionalists who insist that anyone disparaging slavery prove that the 13th Amendment was really ratified. Consequently, although Libertarians call themselves a Party, it is disastrous inviting one of them to a party. It does not matter: Libertarians throw a lot of parties for themselves. A typical party is at a hilltop cabin and is bring-your-own-shotguns to help hold off the U.S. Marshals who have cut the electricity.

The word "libertarian" with a small l is popular among people who share one of the above beliefs but want to make it clear they don't belong to the formal Party. The word with a capital L means a person belongs to the Party and thus one won't be able to tell what he believes. 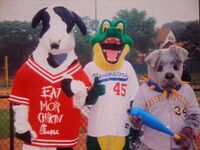 The shadowy founders of the Libertarian Party, in one of their incognito strategy meetings.

The Libertarian Party was originally one of a variety of organizations founded by the shadowy Koch Brothers to let their bauxite mines operate with impunity. Unlike the think tank, the legislative round table, the commerce board, and the fleet of ice-cream trucks, this one would be a political party, and would win elections to achieve the changes that all the other Koch organizations were arguing were so popular as to make politicking unnecessary.

Libertarians even outdo Republicans at touting the benefits of a Party with a "big tent" that encompasses so many different opinions that the voter is totally rolling the dice. One thing many Libertarians do agree on is that last week, I picked up a Nickel Bag of some very fine stuff downtown, if you would like to try a little. 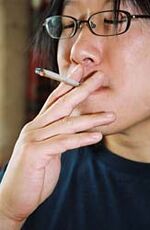 The original — Wait, what were were talking about?

The original symbol of the Libertarian Party was an arrow, jauntily angling upwards through the acronym "TANSTAAFL" -- There Ain't No Such Thing As A Free Lunch."[1] This was taken from Heinlein's novel The Moon is a Harsh Mistress, in which an endlessly wise computer recruits a group of oddballs to liberate the Moon from corporate tyranny and make it safe once again for nudism. In other words, the Party's founders were the Power Rangers.

The original symbol illustrates the biggest difference between the Libertarian Party and the Republican Party, which is that Republicans can generally contrive an acronym that actually spells out a word (or in the case of the USA PATRIOT Act, a short phrase). This is because Republicans can generally spell. Republicans, incidentally, also have theme songs and cartoon mascots behind most of their legislative bills, whereas Libertarians rely on ponderous position papers.

After decades of potential Libertarians pointing to the "TANSTAAFL" logo and going, "Huh?" the Party switched to a logo with the Statue of Liberty. This was intended as a test of possible members. Anyone who points out the irony in the Libertarian Party honoring a government building that does not even charge admission is clearly unhinged enough to join; and (if also a complete unknown with no record of participation in politics) becomes the candidate for Governor.

The porcupine narrowly prevailed over the unicorn as the animal representation of the Libertarian Party.

As Republicans and Democrats are personified by the elephant and the ass, respectively, the modern Libertarian Party's symbol is the porcupine (pictured). The porcupine is the perfect symbol because it owns weapons and loves grass and weed. Also, everyone who comes in contact with it hates it, which is a giant leg up in electoral politics.

The Libertarian Party also has a recruitment brochure. Unfortunately, they regard it as private property and will not let it be reproduced here, nor any other information about the Party.

Libertarians famously invented the ideas that Democrats have enacted but do not want to be seen in the same room with. Libertarians repeatedly tout new taxes, rather than outright prohibition, as a "market solution." Libertarians initiated many modern programs:

Unfortunately, it has not swayed the polls that Libertarians time and again unveil plans slightly nicer than those of the Democrats. However—

Libertarians have been elected to legislatures across the United States. Namely:

Libertarian legislators go to the capital with idealistic hopes to replace coercive arrangements with voluntary ones. Which no one remembers, given their work to legalize dope. Republicans and Democrats immediately collude on a bill to increase the number of signatures required for ballot access in the next election. The Libertarians agree to drop their plans and the others agree to shelve the ballot bill.

For those without comedic tastes, the so-called experts at Wikipedia think they have an article about Libertarian Party.

In 1972, the Libertarian Party got its first and only electoral vote when Roger MacBride, a member of the Electoral College from Virginia pledged to Nixon, voted Libertarian instead. This demonstrated several things:

In 1980, Ed Clark was the nominee. He was a lawyer for the Koch Brothers, probably. He was an optimist with a vision of a new resurgence for America. This compared to the grouchy pessimism of the major-party candidate, Ronald Reagan, which cost him many votes.

It is a truism that Republican careers are ruined by "pressuring" a kiss from an aide, while a Democrat who uses a college intern as a personal sex toy becomes an elder statesman. This is not because Republicans have less rectitude but because, as they wrap themselves in morality, they are more entertaining when caught. (The criticism is reversed on talk radio, because it is objective.)

Thus, Libertarians, rejecting all victimless crimes such as drug and gun laws, simply shrug and carry on when found to be violating them, offering the press no amusement at all. They are just as undeterred by arrests and convictions, unlike any potential voters they might have attracted. In fact, they go out of their way to violate vice laws; and when that does not achieve arrest, do so en masse on the lawn of City Hall and bait the policemen. Who says you cannot reform the world from inside a jail cell? What about Nelson frickin' Mandela?

The key problem with these politicians, who are more easily separated from a TV camera than from their Baggie of hash, is not their pursuit of illegality but of unwisdom. For example, discharging a firearm inside an apartment while "cleaning it" is almost completely the province of the Libertarian Party.