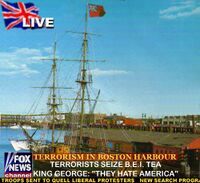 Fox News offering their 'fair and balanced' view of the situation in Boston Harbour.

The Boston Tea Party was a violent revolutionary act in Boston, Massachusetts in 1773. It was an event claimed to lead directly to the American Revolution. However, among revolutionary acts, it is unique only in having a really girly name.

The Bolsheviks' storming the Winter Palace in 1917 is known in Russian as Mrs. Lenin's Soiree; the horrific and bloody succession of 17th century British Civil Wars are detailed in English history books as The Great To-do; and The Rape of Nanking, when it is remembered at all in Japanese, is referred to as The afternoon on which his Imperial Majesty's troops heroically seduced your Chinese grandmother. On occasions, the euphemisms have affected the behaviour of the attendees, such as when the French beheaded Louis XVI at The Paris Sleepover. They behaved so like teenage schoolgirls that it proved almost impossible to get them off Instagram long enough to assemble the guillotine.

In reality, what is now thought of as the Boston Tea Party is, in reality, the second such event. The original Boston Tea Party was the one held in Lincolnshire, England in October 1216. This largely ignored but genteel gathering is remembered only for being the event at which King John's insistence on giving himself a "Good Wash" resulted in the loss of the Crown Jewels.

The Boston Tea Party that lives on in historic memory is a founding event in American Revolutionary history, which set the trend for much subsequent political thought on the continent. Within ten years a new nation would be born, founded on the principles of the right to Life, Liberty and the pursuit of Tax Evasion.

The colonists formed a Congress to organize the party, comprising Thomas Jefferson, Benjamin Franklin, and Gomez Addams as well as George Washington Carver and his evil twin Benedict Arnold Carver. While the others were organizing the teacakes and cucumber sandwiches, Jefferson was left in charge of making the tea. The others advised Earl Grey tea, but Jefferson declared himself far too independent to take their advice and ordered Chai tea instead. Since all right-thinking people despise Chai tea, the colonists had one sip of Jefferson's tea (one sip each, obviously) and began rioting furiously.

Perhaps Jefferson, Franklin et al. were attempting to set a Guiness World Record for the world's largest cup of tea by dumping the tea directly into Boston harbour. The results, however, were far too weak, cold and salty to be considered an acceptable cup of tea, and the Guiness Record Book officials declined to approve the record for inclusion. The disappointed participants responded with violence.

For those without comedic tastes, the so-called experts at Wikipedia have an article about Boston Tea Party.

King George viewed this rioting as a revolutionary act, and responded by having Tom Scholz, Brad Delp, Barry Goudreau, Sib Hashian, and Fran Sheehan hanged by the neck until dead. This was known as the Boston Massacre. To justify this butchery, King George had his brothers (who were, oddly enough, a rare species of orangutan) all dress up as tea and throw Indians into the harbor. When this didn't work, King George himself tried a couple different methods. In one, he dressed up as a harbor and threw tea into the Indians. When nothing seemed to work, he declared himself legally dead and shipped himself to Zimbabwe. His brothers moved from Boston all the way to what we now call Canada. They are currently the only occupants.

Meanwhile, the French were devising a silly plan to thwart this Tea Party. Always wanting to be silly and ridiculous, they resolved to attend with underwear on their heads while doing the Macarena, thus showing Americans they were the most comedic and wimpy of all nations. Napoleon Bonaparte, tinyman extraordinaire, executed this plan as intended, but at the same exact time of their tomfoolery, tea was being dumped into the river by continental rebels. The Americans were scared out of their wits and began drinking the lake. France, no longer the silliest nation, joined the US rebels and helped restore themselves to their traditional supremacy. The Americans adapted the event into the feature film Napoleon Dynamite, replacing Dynamite with Bonaparte. 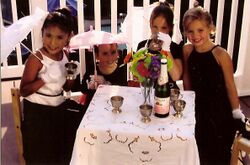 Having a blast at the Tea Party

Incensed by the deaths of their favorite band, the people of the American space colonies turned as one to face George III and launched a DDOS attack on the war's server, creating enough lag that he got fed up with the slow connection and pulled out all Siege tanks and Battlecruisers. Free from England's oppression, the Americans celebrated by catching the white house on fire during the War of 1812; luckily no one remembers that particular war.

The Boston Tea Party was also responsible for the birth of the Liberal media conspiracy.