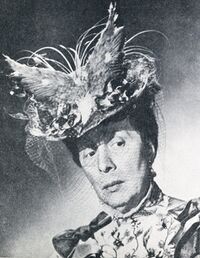 In the Americas it is necessary to beat at least one carriage-driver to death monthly merely to encourage the others to drive on the correct side of the road.

Ladies, if one’s husband should be sent to the New World, the better to govern the unwashed and the uncultured, what may be done? One may, of course, remain in the comfort of London, shewing that the fair sex may manage estates as well as any man. I, on a single day of long renown while my husband yet governed Bombay, once used his positions to evict a thousand Irish peasants from their beastly hovels, while also ordering the naval bombardment of enemy shore batteries in the Bay of Biscay and sending the Highland Regiment to disperse trades unionists in the East End — to the great jollity of those men in skirts and to the equal dismay of any other so-dressed in the locality.

But, thou wilt miss thy husband in the months of his absence, no matter how energetic one’s footmen and how fetchingly they fill their stockings! Alas and alack, then there is nothing for it but to brave the mighty ocean and the terrors there within. And from thence to brave also the more frightful terror of American society!

But what to do when one arrives in the New World? Anyone with position equal to or greater than that of Dame might expect to rise naturally to the very top of what passes for society in the colonies. But gentlewomen of lesser rank may need to lower themselves to facilitate their own rise, and introduce themselves to the benighted peasantry in petticoats that pass for gentry on that distant shore. Take heart, fair ladies! Have one’s chambermaid hold one’s nose and commit to hosting a Boston Tea Party.

The primary and most important prerequisite for hosting a Boston Tea Party must come some time before the event itself. Aspiring gentlefolk cannot simply expect the best in society, even American Society, to pay them court. One must strive to make one’s Boston Tea Party so enervating a concept that our colonial cousins feel as compelled to partake of the wholesome food we offer as would our more distant cousins should we unhappily land, perchance, in the Cannibal Islands. Preparation is all! 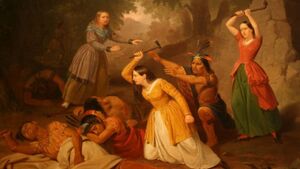 When one’s neighbours lack the wit to even speak English one may need to be forceful with them. They must learn!

To ensure the success of one’s soiree one should first liberate one’s guests from any threat posed by their more irksome, neighbours. One should start with the least civilised amongst these, perhaps half a decade before the anticipated event. But how to cow the more savage of one’s nearby fellows and give them pause for thought before they again assail their betters with bow and hatchet? Thy servants’ children begin to expire from Measles peradventure? Mayhaps a garden-slave hath itched his way to the grave with smallpox, leaving nothing but his bed-clothes? These are Our Lord’s devine blessings. Take time to introduce a few of His microscopic ethnic-cleansers to the heathens. Perchance, they will occupy themselves dying and think twice before peppering the crinolines of ladies with their arrows, or levering off expensively-coiffed scalps with beastly tomahawks.

At the same time, one should take care not to allow one’s semi-civilised neighbours to dissuade the attendance of more desirable guests. For surely, being more refined than a savage doth no more make one cultured than one canst claim to be a prodigy simply because one is more enlightened than the village fool. The properties adjacent to thine are full of Frenchmen and Spaniards. This will not do! Can one expect ladies of quality to feel comfortable partaking of petit-fours while the stench of garlic drifts across the neighbourhood? How can one strike up a civilised conversation while one can hear nothing but the screams of asses being beaten? Something must be done!

A mere Seven Years’ War should suffice to send the miserable monsieurs and scurvy senors scurrying back to the benighted portion of God’s good Earth from whence they came, leaving space for the progeny of these colonial riffraff to expand in the manner which, they insist, God hath decreed. T’would be wise to enlist the cowed savage to help in this matter. For surely nothing shalt make the infant Jesus smile more than the demise of a hundred Frenchmen at the hands of an Iroquois raiding party soon to expire from honest English Influenza. 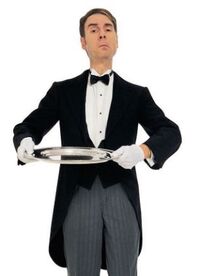 If a lady is compelled to invite Americans to her Boston Tea Party a vigilant butler is invaluable should she wish to see again her lacquerwear, sugar tongs, or teacups.

How best to assure good attendance at one’s tea party? A simple invitation might suffice for the lowlier elements of the social order. But, even in the colonies there exist gentlefolk. The commanding heights of genteel Boston society might expect to receive a dozen such invitations daily and cannot be expected to attend more than three tea parties no matter how strong the musculature of their pelvic floor. However, for one’s gathering to be a success, numbers will be a matter of importance and one may not be able to avoid inviting some ladies actually born in the Americas. Imagine! If it cannot be avoided then have one’s butler count the spoons and send a simply-worded note that conveys the date of one’s proposed Boston Tea Party, and that the recipient’s attendance would be acceptable, if not entirely pleasurable. Take heart, it is not as though thou art inviting them to dine!

If contemplating the presence of natives in one’s drawing room doth provoke such apprehension that one should feel faint, have one’s maid write out the note below on paper of quality appropriate for such vermin ladies. Even in Boston one might find a literate maid if one is prepared to spend some months looking.

A ʃelect few of our deareʃt acquaintances are coming to afternoon tea on Friday next, and we hope to have a little good muʃic. Thy presence alʃo, would be tolerable. Perhaps thou might look in for half an hour: if ʃo, I ʃhould endeavour to appear to be pleaʃed to ʃee you.

But how to ensure that the crème de la crème of Boston attend one’s tea party. Heavens, it could not be more straightforward! Simply petition dear Lord North to impose a trifling levy on lead, glass, or paints. This should be more than enough to excite the minds of all the local ladies of good reputation and have them flocking to partake of a bowl of tea within one’s lovely home. After all, there can be no taxation without libation! 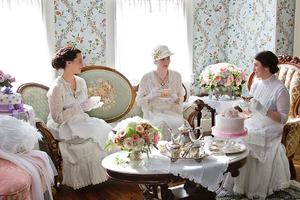 In England ladies freely discus politics. In the Americas, politics and the Tea Party do not well mix unless one wishes to listen to loudly-declaimed but poorly-enounced plans to Make America Great Anon!

Before the hurly-burly of a Boston Tea Party may commence one must ensure that one’s person and one’s drawing room is correctly accoutred. Now that one has ventured to the very ends of the earth one may, perchance, assume that it is acceptable to abandon the touchpoints of ladylike elegance so common in the mother country. For shame! A lady wouldst fain die sooner than so demean herself and her guests. And, think, the broader one’s hat, the larger, frillier and hoopier one’s skirts, the farther away one’s colonial guests must stand! One may not wish to tarnish one’s finest garb on such a plebeian occasion but a pair of silk gloves of some quality allows one to associate with the lower orders without coming into physical contact with their grimy, scabrous skin. And, as for adorning oneself, then surely after travelling so far on his behalf one’s husband might present one with a new pearl necklace nightly. But, if not, one shouldst shew no fear. This is not London. It is not even Edinburgh. One cannot but be the most elegantly-attired lady at a gathering in Boston! It is the fashion amongst Americans to attend a Boston Tea Party dressed as a Mohawk savage!

But, my dears, the vexed issue of what to serve! One cannot expect provincials to appreciate the delicate repast one might arrange for English ladies. Remember, through no fault of their own these ladies hath lived the greater part of their existence without refinement. They did not choose to live on the wrong continent! They choose not to sustain themselves on a diet of beaver glands and ground moose! Give them the finest they might cope with and avert thy gaze should they attempt to consume blancmange with their fingers. They know not better!

Offer a choice of hot tea or chocolate. Lemonade may prove refreshing in the months of Summer but, take heed, offer nothing more enervating. ‘Americans’ and strong drink doth not mix. They hath neither the temperament nor stomach for it and may be inclined towards inopportune rashness at the very sniff of sherry. Surely, no one wishes to see one’s guests tarring and feathering the houseboy, or planning armed invasion of the neighbouring properties.

Have a trusted servant brought from England supervise the brewing of the tea. For surely even the least educated English maid knows how to gently warm a porcelain urn without causing cracks, to steep within one’s freshly imported China tea in newly boiled water and to gently agitate such without bruising the leaves for precisely three minutes and twenty-seven seconds. American-born servants wouldst fain believe that tea should be steeped in the harbour!

As for dining, spread a simple white cloth on a large table. At one end, set one’s third best tea service and a silver kettle over a spirit-lamp. Plate silver, my dears, not the Sterling set. They know not the difference. At the other end, set the chocolate. Betwixt should be flowers of such daintiness as this crude continent avails, as well as bread and butter cut as thin as a shaving, surmounted with finely sliced cucumber, or such delicately-flavoured tubers as may be locally sourced. On no account should one offer biscuits! American ladies will expect biscuits to be doused in gravy! 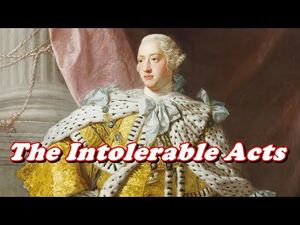 Young Prince George hath, on multiple occasions, suggested to me Intolerable Acts. But a lady must keep such entertainments for her husband’s birthday.

Equally, offer not slices of candied fruit more than an inch in diameter unless one is content to see such transformed into gaming tokens and one’s parlour refashioned into a very den of iniquity where poker and other games of chance will distract from conversation. American ladies think nothing of wagering upwards of a dollar a hand at cards and oft settle differences over interpretation of rules with pistol shots.

No one wouldst wish to embarrass their guests but it may be necessary to find a speedy way to rid the house of visitors once their company hath ceased to be a source of joy. One might prevail upon Lord North to again come to one’s assistance. Cousin Frederick is most amenable. Perchance he will consent to tolerate Papists to live within what was until recently New France. Perchance he will forbid American ladies from crossing the Appalachians to build tea-parlours on the lands now habited by the Powatans and Creeks. Surely, even the most stubborn native-born lady will be so affronted by such that they will be gone from one’s presence within minutes to protest in the streets like the commonest urchin.

If these devices shouldst not suffice, suggest that one’s husband may affect an ordinance compelling them to house a Redcoat or otherwise pay for such accommodation with a levy on, let us say, paper or some such commodity. Nothing causes an American to flee such as the suggestion of a reasonable level of taxation.