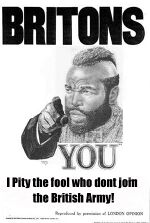 The British Army is the Greatest Army in the World, with some of the greatest and most bizarre traditions, such as the running of the cheeses. These traditions are kept alive today by all four members of the British Army that haven't been decommissioned by governmental cutbacks. This amalgamated 'super-regiment' of proud warriors comprises of all the famous regiments which have served Britannia in its past conflicts. These include the Wank Watch (KOSBs all the way), The Royal Welsh Fusiliers and The Royal Irish Conscripts.

The roots of the modern British Army began in the reign of King Charles I, when Parliament was pissed off with the King for being, well, a King. They declared war on him, plunging Britain into Civil War. Cromwell, the king's chief parliamentary opponent created the New Model Army which was far greater and more useful than the old model army, which consisted of the king's toy collection. When the war ended the English, and their erstwhile allies and natural enemies Scotland, realized they don't always have to fight among themselves and with the Welsh and Irish in tow began kicking the rest of the world's arse.

This new model army was the basis for the British Army, which has lasted these past 400 years because, even four Brits are a match for any other European nations entire armed forces. Hence the prerequisite 'Great' in front of the word Britain. It was also convenient that Germans are notoriously hydrophobic( see World War I and World War II), and the French first thought it was okay to make ships out of cheese. In this time they have whooped pretty much every other country in the world. It is also believed the British army has the best track record for conquering 3rd world countries, and it has never lost a major conflict since 1776, where some damned colonials with the help of cheese-eating-surrender-monkeys happened to acquire their independence. This was largely due to Britain being ruled at the time by King George III, a man with more screws loose than a South American Favella, and the unfortunate British habit of stopping for afternoon tea during a battle. The American Colonials cunningly did not have this problem, as they had turned Boston harbour into a giant teapot.

The British Army may not be the biggest army but they make up for it by being the best. It also helps having an English channel between them and the their enemies (see world war 2, World War I, Napoleonic Wars, American Revolution, and just about every other war they fought in). However once the English channel falls the British surrender, see the Norman conquest of Britain where Vikings who had settled in Normandy and WERE NOT FRENCH, learned to build ships out of wood instead of cheese resulting in the French crossing the channel and conquering England. 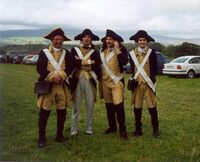 Sadly, however, those glory days have passed.

The four remaining members of the Army- Sarge, Taffy, Paddy and Scotty- are all that now stands between Britain and the rampaging hordes of 'foreigners' that threaten this green and pleasant land. However they have the might of the Royal Navy (an old fishing boat with more holes in than deck) and the Royal Air Force (Paddys elastic band powered toy plane)to help them in their efforts.

'We're hopefully just there to keep the peace this time,' said Taffy to the press, 'because unfortunately we're only allowed one set of body armour between us, and it's on Paddy's back 'cos the yanks keep shooting behind us'.

But wherever they're needed, they will go, the British Army, proud, brave, true to the last. As long as the moped doesn't run out of bio-diesel.

The British Army is currently pursuing a vigorous and highly successful TV advertising campaign. This is to ensure that all four existing members of the army remain, and maybe, just maybe recruit a fifth... (subject to legislation, recruit may have to buy own equipment and arrange own training and transport). 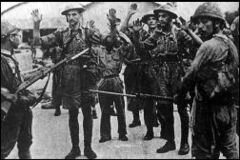 The British Army uses a wide variety of weapons, including water pistols, rubber chickens, 13.37-pounder guns, Challenger 2 Tanks captured from Salisbury Plain, and civilian boats used to retreat across the English Channel. Other weapons include the Mk1 Darjeeling Teabag. Their most effective weapon, however, is the cunning British art of hiding behind the English Channel.

Ever since a mysterious gang of land-pirates only known as ISIL emerged, Prince Charles wanted a new weapon which could cause a papercut from 50m away and make Daesh run a mile before they realise they were cut by an awesome assault rifle known as the SA80.