From Uncyclopedia, the content-free encyclopedia
Jump to navigation Jump to search
This article is about the animal species. For the country, see Germany. For the language, see German language. 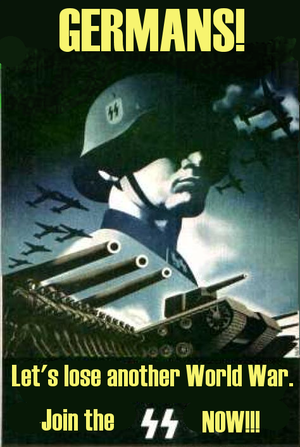 German poster for the 2005 elections.

“Give a German a gun and a tune to march to and he'll have taken over Paris within the week.”

Germans are a species of Northern European mammals. They live in herds, usually guided by a male Austrian.

Germans are classified the following way:

A German in his larval state.

Germans are, like humans, mammals. Unlike most responsible humans, however, the female German (or "Führerin") does not take care of the young. Early childhood care in usually left in the hands of the fiercest - or at least loudest - ranter from the preceding generation.

The lack of diversity in courses of study occasionally presents a problem. When there are shortages on the foods that the Germans have been trained to eat, they usually have no idea how to feed themselves or their offspring. Germans are then forced to improvise. This is one of the many reasons why the breath of young German children smells like urine.

After childhood, when they've reached the age of 5, German males go through a period of "musth", characterized by highly aggressive behaviour, accompanied by a significant rise in reproductive hormones. Because the German males outnumber the females by 3 to 1, evolution has provided the females with multiple vaginas and a huge womb. This is why during childbirth a German female is often compared to a cluster bomb, as they breed in litters as well.

Although Germans are an endangered species, sightings are not altogether inconceivable. Here is an artist's sketch of the German, captured in a rare moment of respite.

A herd of Germans usually consists of about 80 animals led by a patriarch or "Austrian", whom most Germans will follow into oblivion.

Like lemmings, Germans have a high reproductive rate and can breed rapidly in good seasons. German populations go through rapid growths and subsequent crashes that have entered popular consciousness as a supposedly widespread German phenomenon of mass suicide by waging large wars. These periods of mass suicide generally happen every 75 years, though there are known exceptions.

These mass suicide episodes are essential to the existence of other races in the world. If the Germans reached a too high number of citizens, they would finally be able to take over the world in the next world war. This theory is based on mathematical evidence that shows that, in a war, a German usually kills 20 enemies before being killed. Strangely, there seems to be no relation between the Spartans and the Germans.

Despite these tendencies and rapid population growth within the last two hundred years, Germans are quickly becoming an endangered species. A highly migratory animal, the German has found his choice environment and living space (Lebensraum) to have dwindled over the years, reducing the possibilities for widespread growth in multiple regions. Likewise, some scholars have noted that the rapid mating periods have now been replaced almost entirely by piss play, bondage, bukkake and bestiality, an unusual development indeed. This change of events has altered known population figures, and has the rest of the world scratching their heads, wondering what the hell happened to the Germans.

Germans today have very few enemies within the animal kingdom, other than themselves. With the recent extinction of the "Homo sapiens Communii" or "Common Red Soviet" the Germans have lost one of their biggest natural enemies. Because Germans are very large animals (some can weigh as much as 400 kilos) their only real predator is the huge "Homo sapiens Batavii", the common Dutchman. The Dutch tend to invade the German feeding grounds every summer with their mobile slaughterhouses or "caravans" and, on their way to vacation in the Balkans, kill as much as 24% of the total population of Germans.

Despite their appearance, ze Germans are remarkably intelligent animals. Some Germans are in fact smarter than the closest related animal to humans, the Chimpanzee.

Germans are not recommended as pets. Although they are extremely trainable, most people have found that they do not possess a mind of their own and depend on receiving and carrying out orders. 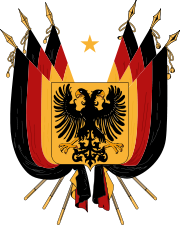 Roughly 47% of Germans are directly descended from eagles, while an additional 25% are of mixed eagle-humanoid ancestry. Consequently, the eagle has featured prominently in German heraldry since the Middle Ages. Germans took advantage of their eagle genes during the Hanseatic League, as they flew quickly from port to port in the North Sea and the Baltic. In World War 1, Manfred von Richthofen (The Red Baron) famously declared, "Vee Germanns ahr all eegles. Dat is vy vee own dee aihr." Even today, modern German jetliners are powered by bio-mechanical suits which tap into the pilot's eagle genes. It is said that on starry nights, Germans can be spotted as far afield as North America and East Asia, after having consumed healthy quantities of Weißbier.

Regarding this close genetic affinity with eagles, biologist Heinrich von Huddlehausheim wrote in his speech to the Aquila Teutonica Conference: "The German relationship to eagles is like the British relationship to bulldogs, the French to frogs, the Americans to hippos, the Japanese to raw fish, or the Canadians to...wait, Canadians exist don't they? At any rate, our greatest heroes from Arminius to Bismarck had parents who mated with eagles."

Germans worship a pantheon of deities, the most important of them being "The Hoff" (god of wisdom), and his second in command, "Basti-Schweini" (god of football). Oom-pah-pah music is played at religious festivals and rites throughout the year, and the expression "Prost" is believed to summon oak tree spirits. Adolf Hitler was also added to the pantheon right after his death and is sometimes prayed to at the start of each farming season for healthy crops and to keep Jews from infesting the area.

Germans have a huge burden to carry with them. After all they did lose 2 World Wars, . and failed to exterminate the Jews. Germans are very ashamed about this and to not like to be reminded of these "shortcomings". It is advised that when a German claims he, his father, or grandfather didn't participate, you just play along. After all no one is proud of the inferiority of himself or her relatives. Indeed many older Germans (75+) are looked down upon because they "didn't get the job done".

Nein. Please move on to ze next paragraph. Mein towel is on this deckchair.

To many the German language sounds like a pack of dogs fighting with each other. There is some truth in this stereotypical portrait of the German tongue. As Germans lack advanced verbal skills, they interact with each other through short bark-like sounds. So far these sounds (of a total of 16) have been deciphered:

For example when a German female has found some food she might have the following conversation:

A simple but effective way for them to communicate.