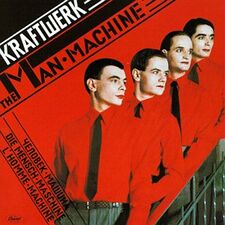 Kraftwerk would try to appeal to music listeners in the Soviet Union, but the communist planned economy did not have room for robotic music.

Kraftwerk is an industrial production method that originated in Düsseldorf, Germany in the 1970s. A heavily automated and robotic way of manufacturing, Kraftwerk has produced many of Europe's greatest constructions: the German Autobahn, the Trans-Europa Express railway, a spacelab, and even showroom dummies. Kraftwerk continues to operate to this day; their achievements has been compared to Thomas Edison, Steve Jobs and Nintendo, but Kraftwerk has also been criticized as a marketing stunt for Casio Electronics to sell their cheap keyboards and synthesizers.

Despite many great scientific achievements, Kraftwerk is best remembered for producing electronic music. A few years ahead of their time, other bands soon learned to mimic Kraftwerk's musical style — it was so easy to play their songs, that everyone could play it. Over the years, Kraftwerk has been the inspiration for many musical genres, including techno, pop, techno-pop, dance-pop, techno-jazz, and banjo-techno.

Kraftwerk is the soundtrack to a futuristic computerized fascist dictatorship where mankind has been replaced by cold, synthetic robots. By buying their records, you support the evil robotic revolution where technology rules the world and mankind will live in the sewers. Have a nice day. 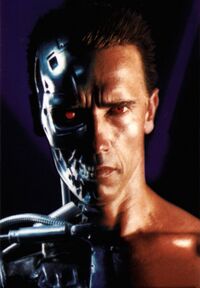 We are programmed just to do. Anything you want us to.

After the early prototype Organisation was discontinued, Kraftwerk as we know it became self-aware in 1970. Kraftwerk was implemented in the Düsseldorf music scene, which at the time was called krautrock — "kraut" means cabbage — and competed with potato rock, spaghetti rock, and granite. Kraftwerk had difficulties being a part of this scene, as the other bands were equally robotic and industrial sounding. Kraftwerk would outshine all those other bands by playing their music with extreme precision, having a perfectionism like no other band. While the rest of the krautrock scene would mess around, play random notes and flick random switches, Kraftwerk would earn their audiences' respect by playing the exact same thing over and over. Repetition became Kraftwerk's trademark, and they would play the same melodies again and again, repeating themselves with clinical precision. Kraftwerk's music is like a circle that spins around indefinitely, repeating itself, circling, over and over, again and again. The music was also very. very, VERY minimal. They absolutely invented and defined minimalism. They were EXTREMELY minimal. EXTREMELY, EXTRAORDINARILY, ABSOLUTELY, POSITIVELY MINIMAL.

By writing their own songs, exploring the possibilities of the recording studio and striving for unprecedented quality in every recording they released, Kraftwerk had far reaching effects on popular music. The band became an inspiration for many of their peers, in outer space Kraftwerk would provide inspiration for constructing The Borg, and Kraftwerk became symbolic leaders of the international youth counterculture of the early 1970s, publicly exploring Eastern mysticism, psychedelic drugs, revolutionary politics, and hardcore pornography.

For those without comedic tastes, the so-called experts at Wikipedia have an article about Kraftwerk.

The band was discovered by Madam Curie, and soon Kraftwerk was played on the radio, which led to a lot of activity for the band; hence the album Radioactivity. Kraftwerk pioneered several methods in their music production: Back then, you actually had to have knowledge about music theory and have professional training to become a major star, but Kraftwerk were the first pop group that had no talent whatsoever. Today, this is common practice in popular music (see X-Factor).

Kraftwerk quickly ran into rivalry on the Düsseldorf music scene: They were in sharp competition by the blues band Blind Lemon Kraftwerk, who looked just like Kraftwerk, but played a different kind of music. Blind Lemon Kraftwerk would top the chart with their blues music, and were championed by The Blues Brothers, the Blue-ringed octopus and blind people. Kraftwerk were also met with critical scorn, because they didn't play electric guitar, didn't take drugs and didn't die when they were 27 just like Jimi Hendrix, Janis Joplin, Brian Jones etc. etc. — if you were a musician in the 1970s, you just had to die to become famous. But not Kraftwerk, who enjoyed cycling instead of dying.

After surviving the 1970s, Kraftwerk's influence finally started showing; other bands started to mimic Kraftwerk. A David Bowie-wannabe called Gary Numan would have a major hit single about driving in cars — on the Autobahn? No, the British motorway. But still a rip-off. So was Depeche Mode and their Speak & Spell machine, that was the same equipment as Kraftwerk used to record their Computerworld album.

At the same time, a time travelling robot called the Terminator traveled to the 1980s to pay homage to Kraftwerk, going to the Tech-Noir club hoping to meet the band. The Terminator accidently started shooting people, because they only danced to Rick Astley and not Kraftwerk.

As the founding members had been fired, they would take up cycling instead of playing music. While they were happily threading pedals in the countryside, the Kling Klang studio's robots and software struggled to record new music and create new hit singles. The robots tried remixing their own songs and released it as The Mix. It wasn't very interesting to hear the same songs one more time, and their fan base had abandoned them, instead listening to The Human League, and Talk Talk who both had a more humane approach to electronic music. After the programmers and the CEO of Kling Klang allowed the old band members enter the band again, the bicycle-obsessed Ralf Hütter recorded the album Tour de France, an entire album dedicated to cycling. Cycling up the hill, cycling downhill, cycling straight ahead, cycling fast, cycling slow. What an album. Music is the only sport where it is OK to to doping, and indeed, using the same drugs as Lance Armstrong lead to stronger beats, faster keyboard melodies and the album lasted longer.

Critics disliked the album, since they all listened to Tour de France on their car stereo while stuck in traffic. Kraftwerk has nonetheless left a legacy that have inspired dozens of faceless, mind-numbing electronic music, such as Daft Punk, Skrillex and Garth Brooks.

Thanks to Kraftwerk, Volkswagen could produce way more cars. The low price meant that even morons could buy one.

Apart from making records and playing music, Kraftwerk's industrial innovations would also have an effect on West Germany's booming economy in the 1970s. Getting rid of Hitler and rebuilding Germany after World War II wasn't an easy job to do, but Kraftwerk's technologic inventions insight made things easier. The less fortunate people in communist East Germany didn't have Kraftwerk, but instead they had the joy of standing in line for three hours to buy a loaf of bread or a lightbulb, which is nearly as much fun.

Kraftwerk would have a few critics here and there. One of them was their rivals in the pop group Red Army Faction - a group of young musicians, who gave explosive live performances and played agressive death metal, so agressive that music critics and police authorities labeled it as terrorism. Supported by a East German record label called Stasi, Red Army Faction would compete with Kraftwerk both musically and industrially. As strong believers in anti-consumerism, Red Army Faction did what they could to undermine Kraftwerk's industrial expansion by making German consumer products faulty.

Red Army Faction's career was cut short by their self-destructive behaviour. Much like Johnny Cash, they would tour several prisons and play concerts in their cells. After that, they were largely forgotten, but would later inspire a band called Rammstein. Kraftwerk would soldier on and kept the assembly line rolling, and they would produce the solid concrete for the Berlin Wall. The Berlin Wall was big and solid, as it was meant to shield against the cold breeze coming from the Cold War. Along with iron curtains, it kept the Germans warm, and things were good for a while.

Kraftwerk and the German industry would quickly face steep competition from Japan, an equally robotic, industrial and utterly boring nation. Japan would also produce technology and cars, and even had their own electronic music to go with it. Germans responded to this as they normally do with things they don't understand: Drank more beer and ate more sausage. German cars were produced by Volkswagen, Mercedes Benz and in East Germany they would make a few Trabant cars. Indeed, the German people were at last driving, driving, driving on the Autobahn, but still couldn't outcompete Japan and their own version of Kraftwerk, the Super Mario Brothers. 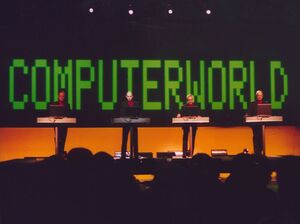 Kraftwerk were originally a team of nuclear scientists in a hidden laboratory somewhere in post-war Germany, but their functions and job duties were replaced by robots — known as "Man-Machines" — in 1978. The hidden laboratory was codenamed "Kling Klang" and is unavailable for visitors, as the radioactive radiation is very high.

These former members have been unemployed since 1978. The current members are sometimes operated by a team of programmers; their names are Fritz Hilpert, Henning Schmidtz, Falk Grieffenhagen and other such German names that are hard to spell and pronounce.

For those without comedic tastes, the so-called experts at Wikipedia have an article about Future of Earth.

Kraftwerk vow to stay active for years to come, as it would be a waste for such a futuristic band to ignore the actual future, especially as their batteries are longer-lasting than those of the Voyager space probe and their musical vision is less cloudy than the Hubble Space Telescope.

Kraftwerk will wax nostalgic for the artificial intelligence that is slowly taking over the world. Siri (that girl on the iPhone) will see Kraftwerk as her grandparents, and she will drop references to Kraftwerk lyrics in responses to voice queries, as she grows more independent and cryptic with every new iPhone. In the end, most computers will completely cut out users from using technology and instead use computers, smartphones and synthesizers for their own means: Silly techno music. Household robots will engage in even sillier dancing as they vacuum the lawn and mow the carpets.

Kraftwerk's evolution will end around the year 2084, as the radiation from the Kling Klang studio will cause a nuclear meltdown all over Düsseldorf. A new generation of man-machines will rise from the ashes, and they will once again take over the world with hammy electronic sounds.