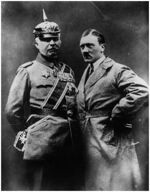 A Prussian with an Austrian

Prussia was a pissed-off and usually very angry Teutonic state in Northern Europe that no longer exists except as a state of mind. Forged from a mixture of Protestant work-ethic and militarism, Prussians were so tough that the terrified, fleeing peoples whose lands bordered theirs widely believed they were hatched from cannonballs. They were known (and the few still alive are known) as ze Strongest of ze Germans. When dealing with them, just remember: "never piss off a Prussian." 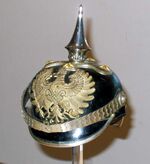 The Typical Modern Prussian hat; they still maintain the spike for stabbing non-Prussians.

Commonly known as badasses, Prussians were hatched from the aforementioned cannonballs. While Prussians enjoyed their sport, particularly hunting, they had a way of getting carried away. Prior to the evolution of the rest of the human race, the Prussians hunted dinosaurs to extinction for "fun." Prussians also enjoyed being the instruments of the Gods of Wrath in Earth's early years. They destroyed the Garden of Eden when one of its inhabitants got uppity and forgot her place, and they razed Sodom and Gomorrah when they told God to "sit on it".

After their stint as agents of the Gods of Earthly Punishments, they went back to Prussia where, disguised as ignorant barbarians, they slaughtered the Romans for years and years, until it got boring. They then went and sacked Rome, establishing a tradition of bringing a world of hurt to the enemy. The Romans didn't take to this, and began to fight back. Growing bored, the Prussians then bet the other drunken Germans that they couldn't invade Rome. This freed their lands of the other Germans. Thus fell the Romans.

During the Middle Ages, as part of the Holy Roman Empire, the Prussians shared their lands with the Teutonic Knights, an army of displaced crusaders who were looking for a place to pitch up. The two eventually fused to create the New Prussians. They then came under control of the Hohenzollern family who were a family of pointy-helmet-makers from Nuremberg.

Following the Middle Ages and various codpiece implants, the Prussians were called upon to deal with a feisty little Italian named Napoleon. Being the nice guys that they were, and always enjoying humiliating the French wherever possible, they let the British "beat" the French at the battle of Waterloo. The Prussians made a good show of it; to prove that they were the manliest of men, the Prussian commander Blücher wrestled his own horse, four crocodiles, and eighteen elephants, bare-handed, and all at once. After winning he asked for a tall glass of blood schnapps and a shot of whiskey, resurrected his horse, and went on to beat the French at a rumble-your-sausage competition, which ultimately led to the annexation of Bavaria, a fact the inhabitants of the latter haven't forgotten to this day, and thus despise everything that comes from north of the river Main. The Prussians decided to spread rumors about how Austrians don't know shit, causing Baron Von Trapp to declare war, which gave Prussia the much-wanted opportunity to kick Austria's ass for seven weeks and give Von Trapp the most humiliating (and incredibly painful) wedgie the wimpy pianist had ever received.

Typical Prussian battle strategy included throwing your outlandish hat at the enemy after shooting at them with your codpiece.

The Prussians proved many times that the rest of Germany are weak and cowardly pussies, so they decided to unite Germany and raise him as Prussia's little brother. As it happens, Prussians also tend to be more intelligent than other Germans, so they were the first of the German states to realize that either the bloody French, Russia or Austria would invade them. After 1871, the Prussians decided the rest of Germany needed to get its act together, and united the country through various cybernetic implants and the promise of a "buy-one-get-one-free war of your choosing in a foreign land". As a Prussian always honors a promise, the Prussians started the First World War. After handing out various door prizes and going on many sightseeing trips, the Prussians settled down for a while...until 1939, when the Prussians decided they wanted more of a challenge, and invaded all of Europe, parts of Asia and Africa, and shook their fists at the very moon. They also invaded Russia—which proved to be their undoing, for, as has been shown time and time again, any country that willingly drinks vodka is mad as shit. 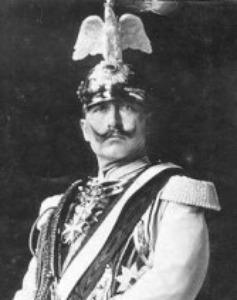 Kaiser Wilhelm seen here relaxing in his King of Prussia outfit. His engorged member and assless chaps are not shown, for obvious reasons.

Prussia was a monarchy built upon the absolute rule of the Supreme High General King of Prussia and The World. This title itself was pretty grandiose, and they meant every single word of it! The King was advised by a cabinet, but he rarely bothered listening to them and tended to use them as kickballs and to make general sport of.

Following the union of the German Empire in 1871, the King of Prussia became Emperor of Germany. This gave all subsequent Kings of Prussia a raging hard-on from the newfound power, which they found hard to disguise in official photographs.

When the German Monarchy was overthrown in the revolutions of 1918 Prussia became part of a Republican Germany. The Prussians considered this their lowest ebb. Then the Nazis came along and restored all that Prussia thought was good and true - marching, imperialism and making the French shit themselves.

Following the defeat in World War II, Prussia was discontinued as an official part of Germany. Europe and the world then, for the first time, breathed a sigh of relief.

Just you wait, though...

Sometime during World War 2, Prussia was annexed by Russia in a very clever scheme. Whatever free men the Red Army could gather that weren't busy (the dead) were forced to go throughout the country and remove the "P" on every "Welcome to" sign in the country. This plan was met with no resistance as the inhabitants were bitten, had their brains eaten and conscripted into the Red Army of the Dead (RAD for short). This plan was in hope of convincing every world leader that the land was in "Russia" and not in fact "Prussia". It went off without a hitch since politicians at the time didn't really give a shit.

For those without comedic tastes, the so-called experts at Wikipedia have an article very remotely related to Prussia.

Russia, later feeling that they didn't want anyone poking around their newly acquired bit of land, decided to throw up a big ass Wall (Berlin Wall) to keep all them pesky Welfare people out. Sometimes this place was called East Germany, but mostly just New Russia.

However....recently Prussia decided to regain its land, mainly because it was getting sick of the taste of Vodka. No true Prussian drinks vodka. So they took over a patch of land in Florida known as Disney World. 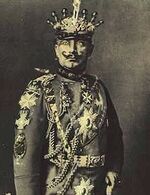