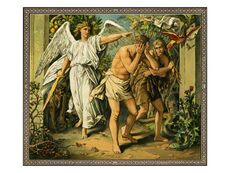 Begone foul humans! I am no longer your feathered friend!

“The Fall, the Fall... that's all they talk about! Christ, I'm so sick of hearing about it.”

~ Cain on having sucky parents

Archaeologists like Stephen Hawking and Norman Rockwell now believe the garden's location was in fact not London but Mesopotamia, and have published numerous books and papers on the subject, as well as graffiti and even some performance art.

In Hebrew and Islamic tradition, the first old lady Adam got to was a transsexual cabaret dancer called Lilith. Everything went well until one day while they were having sex Lilith said he/she wanted to be on top but Adam wouldn't let him/her. Adam became frightened and insecure, and began to speak of head aches and clerical celibacy. Meanwhile Lilith had the idea to plant marijuana, poppies, and coca plants in the hope that Adam would mellow out.

Lilith is said to be the originator of today's societal drug problems. So Adam developed a serious drug abuse problem and when he found out that Lilith was cheating on him with most of the animals. Adam was bumming out big time because he would have to go back to full time masturbation again. Gloves hadn't yet been invented and all that horticulture was hard on his hands. He had really bad calluses. So Adam started lying around bed crying all day, wanking and cutting himself; naming all the mental illnesses, until his bitching and moaning got to God and he banished Lilith. WHO EVER IS READING THIS COMPLETE NONSENSE GARBAGE ITS NOT FUCKIN' TRUE

God felt pity for Adam, especially after he'd had a particularly nasty experience with Poison Ivy, and in the Autumn of their fourth year together, in an act of uncharacteristic generosity he made Steve from Adams rib and introduced them. Adam and Steve wrote many folk songs about social problems that didn't exist yet, until they met Satan in the guise of a serpent named Bat Fuck Norman, who claimed to be touring the country in his VW micro bus. Bat Fuck Norman introduced them to psychedelic mushrooms and fugu (Japanese puffer fish that makes you all trippy), and various Apple products such as the iChing.

God became mightily pissed off when He saw the whole place was going to shit, while Adam and Steve were hanging out getting high and smelling up the place, so He threw them out after 30 days notice. After their expulsion, Adam and Steve wandered the Earth complaining to whoever would listen and feeling very sorry for themselves. God flipped his real estate, bulldozed the Garden of Eden and put up luxury condos for retirees, hoping at least He could cash in on His disappointment in humanity. This proved to be a mistake due to a recession in the housing market, so God abandoned the site and forgot all about it, starting over and setting up shop on Alpha Centauri.

Sadly very little remains of the original Garden of Eden. The modern-day Eden is mostly deep beneath the surface of the Persian gulf, off the coast of Iraq and was largely strip mined by Aquaman as part of the military industrial development of Atlantis; destroying all the priceless biblical archaeological evidence in the process of providing the merpeoples a network of jet ski highways for inter oceanic commerce and nuclear testing sites for the sub surface to air missile defense system needed to protect them from invasion by the air breathers.