From Uncyclopedia, the content-free encyclopedia
(Redirected from VW)
Jump to navigation Jump to search 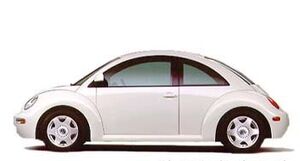 For those without comedic tastes, the so-called experts at Wikipedia have an article about Volkswagen.

Volkswagens, like other species of automobiles are a kind of automated carriage or buggy that does not require horses to move them forward (or, in most cases, even backward!) Volkswagens are also famous for that new car smell, which in reality, is the smell of too much hot steel covered in plastic and paint. Famous Volkswagens include the Herbie the Love Bug and Fillmore from Radiator Springs.

Volkswagens are today manufactured by the Reichsfolksblitzkriegswagenwerke AG located in the town of Whoreburg, Germany. 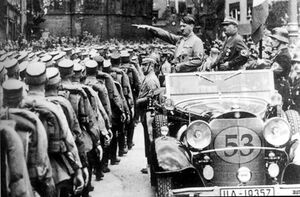 "You must be this tall to ride the Volksfagen.".

To save cost, blinking turn signals weren't incleded on the Beetle. Hand signals were used instead.

After Vorld-Var-Two Volksvagon stuggled to recover from its Nazi reputation. One problem vas zier akcents und zier love of shnitzels. Zay took a class in speaking like people who didn't invade Poland... and it paid off. However, their product line required major retooling. Engines designed in the Third Reich to run on concentration camp victims needed to be made to run on petrol. For this they invented the first hybrid system, that was later incorporated into the Toyota Prius. They also developed the first satellite navigation system. Dispite these innovations, Volkswagons did not sell well, mainly do to slip ups that revealed they were still Nazisge, such as their hybrids being only rechargeable with national socialist speaches and their GPS system only giving directions to Poland. 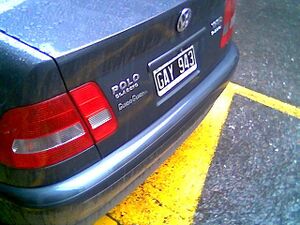 A GAY Volkswagen Polo. These cars get rear-ended and *enjoy* it.

Like many things in the early 1980s, Volkswagens sucked. However, with the introduction of the Rabbit they were back in business. The Rabbit was a furry version of the beetle that hopped, had sex a lot, but did not remind people of Hitler (at least not too much). The GTI was an unpimped version of the Rabbit that ran on shnitzels and was made popular by the V-dub commercials, which featured the Germans "shticking zer shnitzels into za car und giving das Rabbit das shuck und fuck". This gave Volkswagen back some of their German-ness, and helped them become more popular. 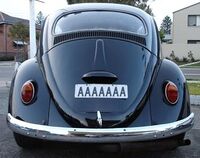 Volkswagon had found in the 1990ss that had lost the queer car market to the Ford Mustang convertible. They needed something cute, retro, and something that screamed "I like to take it in the ass!" (as opposed to the Mustangs, and for that the Mini's "I like to pound ass!" image). It came in the form of a homosexual version of the Rabbit. This way the gay subculture (second only to shitzer in Germany) could telly who was a top and who was a bottom more readily. The old Beetle's engine was reconfigured to run on liquifed puffsters, which were left over from World War Two, and also was produced by god fearing Southern boys with tire irons and hydrofluoric acid. This helped help the engine run in a more fabulous manner. Afew straight men bought Beetles, but even they turned gay after the timing belt broke (which this time didn't last for von sousand years, as people who were to be eliminated in the final solution were behind the wheel. Despite these flaws, the Beetle was a sexual car.

Volkswagen Bus at the emission test center -- that's another pass!

As of 2015, Volkswagen has been recognized as the international leader of low-emission vehicles, especially in the diesel segment. Since 2009, all Volkswagen branded vehicles are able to recognize the operation on a test bench automatically and then adjust their motor power automatically to any desired emission standard.

Recently, Volkswagen has announced even further improvements. All Volkswagen and Audi branded vehicles will be equipped with clipboard and blue collar sensors that will help the engine-management software identify EPA properly and throttle the engine to the appropriate emission limits automatically.