Neon (symbol Ne, atomic number 10) is a mostly-inert periodic table element discovered in 666 by Mr. D. Evil of the Evil Dodge Brothers' Machine Shop. It is also a popular color for bedroom walls and under tuner cars. 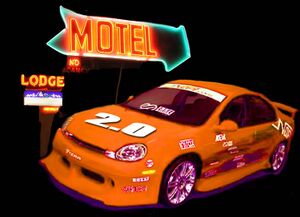 An inert gas used in the distinct bright reddish-orange glow of the Sun and various books and pokemon, it now serves as the foundation of a just-as-inert addition to automotive technology, the Dodge Neon.

The Neon was built to defend the United Spades of America from Chinatown flying saucers, also known as ricers. If a body kit with more neon lights than the mother ship from Independence Day could makes any inexpensive vehicle look like another (better) car, a prospective owner who can't afford better would be eager to buy anything equipped in this manner.

Introduced on Groundhog Day to replace the old Dodge Shadow with its history of bringing six more weeks of winter, the Neon looked kind of cool at first but later came to signify Nothing Especially Original Now.

While neon itself is an 'in' gas without much ert, Neon cars are known for their uncanny chameleon-like ability to change colour as paint peels. This keeps the owner distracted from more mundane automotive issues, such as the affinity of these cars for eating head gaskets for breakfast.

Neon also stands for New Engine Often Needed. After going through redesign and one or two name changes (as the Dodge SX and SRT) this vehicle has been discontinued, finally ending its inexplicable eleven-year run in 2005.

This car is the poor man's (though typically Mexicans) 2 Fast 2 Furious car of choice. Often you can purchase these vehicles for under 5,000 dollars or at local junkyards. Many people who cannot afford to purchase a Honda like to invest in modifying these cars with vinyls, chrome rims, and 1000W soundsystems. These people often have more money in rims and subwoofers invested than what the car's actual value is worth. You will usually see "brotha's" rolling down the street in Neons with 1,000 dollar rims, a 1,000 dollar sound system, and 2,000 dollars of engine modifications even though the car is only worth less than what they invested in aftermarket parts. Many people also put sports spoilers or "wings" on the back in order to increase the cars downforce when driving 70 mph down the highway. Neon drivers are also very over confident people. They will challenge any car on the street to a race even if it is an actual sports car that has 3 times the horsepower than the neon that they are driving.A popular choice of small town drug dealers with the ever so loud exhaust pipe that could eat your pops's olds is able to be heard at least 2 city blocks away. Famous people driving this car daily have been said to be George Dubbya, George Cloony, and that one guy from Honey I Shrunk the Kids, Rick Moranis.

In an attempt to bolster Game Boy sales, Nintendo struck up an agreement with DaimlerChrysler to produce a ten-watt limited-edition commemorative Neon, intended by Nintendo to bear the name 'Neon Yellow: Special Pikachu Edition' but changed in a late administrative policy to not only strike the name of the the Plymouth brand, but everything that started with the letter 'P'. Originally they were going to make an exception to appease Nintendo, who had invested most of they money they had allocated to developing the Gamecube, but in one of the least explained manufacturing defects in history, all 'Yellow: Special Pikachu Edition' badges were misspelled as 'SRT-4'. Despite its distinctive turbocharged one-cylinder lawnmower engine, it shared key powertrain design elements with the popular Caravan SRT-7 while offering an electrical discharge capacity tuned to match that of an actual Pikachu.

It was later deemed 'overpowered' and replaced with a crossover SUV. The Ne element will therefore be removed from the next edition of the Idiotic Table of the Elements as merely one more fad which has run its course.

Neon is said to be an element created by Zeo, the god of Demension Zeta 00. Their for all who have liquid neon runing through their blood are said to be avatar reencarnation of Zeo, the god of demension Zeta 00. The Neon was discontinued after the chinatown auto group launched a new ad campaign depicting cars such as the Honda Civic as being "Fast" or even "Sporty", when in reality all they were was rice grinding pieces of shit. The Neon still lives today on the used market selling for about $1000 ($531.63 if the head gasket has not yet been replaced) we shall forever remember its nice big ball headlights gazing at us as we went down the road.

After the Neon was discountinued it became a favourite ride for those who follow the religion Nu Rave. A spokesperson for that illustrious group said

It's called neon and we wear neon. You can't write this stuff.